A Biden-led US seems to be gaining some traction in the contest for regional influence in Southeast Asia, according to the latest State of Southeast Asia survey report, even as China remains a presence to be wary of. Respondents also seemed receptive to structures like the Quad, particularly where it pertains to pragmatic cooperation. Apart from pandemic concerns which are still high, those surveyed expressed strong views on ASEAN's handling of the Myanmar issue. Recognising ASEAN's institutional limitations, they see the importance of continued cooperation with dialogue partners to tackle the challenges faced by the region. 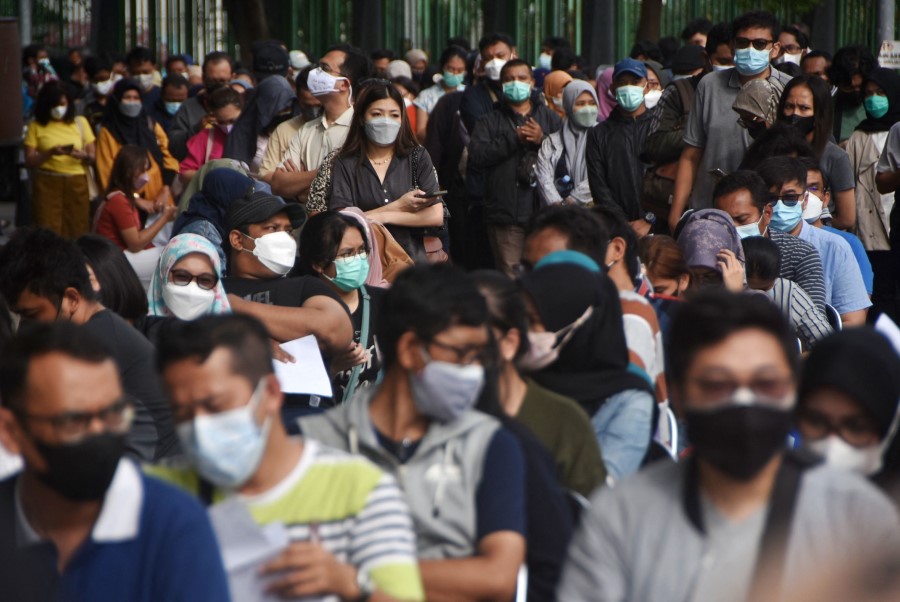 Hundreds of residents queue to get the Covid-19 vaccine booster shot in Bekasi, Indonesia, on 5 February 2022. (Rezas/AFP)

Candice Chan - 25 January 2023
While the Americans have made noticeable progress in their “pivot” to Asia, the crux of successful regional engagement rests on Washington’s ability to work with and around China’s indisputable links and influence in this part of the world, while managing its own relationship with Beijing.
Read more
Translated by Candice Chan on 16 February 2022

The US is gaining significant ground against China in the battle to win friends and influence countries, with respondents across Southeast Asia confident that Washington will be able to lead on issues such as championing free trade and upholding the rules-based regional order.

The State of Southeast Asia 2022 survey report also shows that pressing issues — the Covid-19 pandemic, unemployment and economic recession, and climate change — continue to be prioritised by respondents. In their view, however, ASEAN is too slow and ineffective to cope with rapid developments.

US and China: reality and preference

The US’s enhanced standing vis-à-vis China in 2022 offers a stark contrast between perceived reality and preference. In their perceived geopolitical reality, 76.7% of respondents continue to see China as the most economically influential country in the region.

The same country was acknowledged to be the most politically and strategically influential, garnering 54.4% of the votes. Since the first survey in 2019, China has been ranked first on both counts.

It appears that the Biden administration’s fresh efforts to engage the Indo-Pacific region and Southeast Asia in particular are paying off. Preference for the US was evident when respondents were asked "Who do you have the strongest confidence in to provide leadership in championing the global free trade agenda?" The US came out tops at 30.1%, followed by China at 24.6%, and ASEAN and the European Union (EU) at 15.5% and 14.1%, respectively.

The US remained the number one choice when respondents were asked which "strategic rivals ASEAN would align itself to if ‘forced’ to choose". 57% chose US and 43% chose China.

When asked "Who do you have the strongest confidence in to provide leadership to maintain the rules-based order and uphold international law?", the US came in at 36.6%, with little to separate ASEAN and the EU at 16.8% and 16.6%, respectively. China came in fourth at 13.6%. These findings are not surprising in light of Beijing’s growing assertiveness, in particular in the South China Sea.

This may indicate that Southeast Asia has become more positive on the Quad — which is typically seen as an instrument to contain China — when it focuses on pragmatic cooperation.

The US remained the number one choice when respondents were asked which "strategic rivals ASEAN would align itself to if ‘forced’ to choose". 57% chose US and 43% chose China.

Respondents also appear accepting of the Quadrilateral Security Dialogue (Quad), comprising the US, Australia, Japan and India. The statement "The strengthening of the Quad and the prospects of tangible cooperation in areas like vaccine security and climate change is positive and reassuring for Southeast Asia" drew 58.5% of respondents who "agree" and "strongly agree" with it. This may indicate that Southeast Asia has become more positive on the Quad — which is typically seen as an instrument to contain China — when it focuses on pragmatic cooperation.

When asked what their greatest concerns for the region were, 75.4% of respondents pointed to the Covid-19 pandemic, a slight drop from last year’s figure at 76.7%. This negligible difference underscores the unpredictability of the virus’s variants and their higher infection rates. The second biggest worry was "unemployment and economic recession" for 49.8% of respondents — a significant dip from 65.5% of respondents who chose the same option in 2021. The optimism could be due to the gradual border re-opening in different countries and the green shoots of economic growth. The third biggest concern was "climate change and more intense and frequent weather events" for 37% of respondents.

...the well-worn spectre of ASEAN as a lumbering talk shop continues to loom large in the minds of Southeast Asians.

What does this all mean? The bad news is that the well-worn spectre of ASEAN as a lumbering talk shop continues to loom large in the minds of Southeast Asians. The institution’s continued ineffectualness when faced with intraregional challenges and unfolding geopolitical trends has only hardened such negative views. The real question is how long more ASEAN can afford to operate like this before it loses its relevance to larger powers with designs on the region?

The good news is that the views of Southeast Asians are dynamic and responsive to perceived changes. Digging deeper into the 2022 findings, one finds a couple of bright spots. For example, in last year’s survey 72.1% of Indonesian respondents believed that "ASEAN is unable to overcome current pandemic challenges". This figure has decreased to 48.6% in 2022. In another example, 40.3% of Filipino respondents believed that "ASEAN is elitist and disconnected from ordinary people" in 2021. This figure dipped to 26.8% in 2022. The key takeaway here is that while the overarching view of ASEAN is negative, there is a certain underlying dynamism of perspectives which need to be considered in order to assess ASEAN and its member states accurately.

Southeast Asians are ready to give ASEAN credit when it is due, even in the face of the institution’s limitations and ineffectiveness.

This diversity of perspectives is evident in the findings on Myanmar. Respondents were asked if they "approve of ASEAN’s response to the Myanmar crisis". 37% of respondents "approved" or "strongly approved", 29.9% were "neutral", and 33.1% "disapproved" or "strongly disapproved". Unsurprisingly, Myanmar respondents were most disapproving of ASEAN’s response at 78.8%. Equally expected were the high rates of approval from Bruneian and Indonesian respondents at 58.5% and 44.3%, respectively. This was probably because Brunei held the ASEAN chair when the Myanmar junta overthrew the democratically elected government on 1 February 2021. This brought to sharp focus for the Bruneian community ASEAN’s efforts despite its many limitations. Meanwhile Indonesians were cognisant of the intermediary role played by their foreign minister, Retno Marsudi, in the immediate aftermath of the coup.

Perhaps more instructive is that of the respondents who approved of ASEAN’s response to Myanmar crisis — 42.5% believed that "ASEAN has taken active steps to mediate in the crisis (eg Leaders’ Meeting, Five-Point Consensus, appointment of Special Envoy)", 30.1% acknowledged that "ASEAN is doing the best it can within its institutional limits but is unable to override the intransigent attitudes of the Myanmar stakeholders", and 19.3% noted that "ASEAN is already going above and beyond without violating the principle of non-interference". These findings underline the point that Southeast Asians are ready to give ASEAN credit when it is due, even in the face of the institution’s limitations and ineffectiveness.

All in all, the survey captures the zeitgeist: while great power competition in Southeast Asia continues to intensify, Southeast Asians are cognisant of ASEAN’s institutional weaknesses but they are willing to recognise its achievements even if they desire for the institution to enhance its own resilience and unity to fend off external pressures.

Related: Survey: China the most influential and distrusted power in Southeast Asia | China has a major soft power problem in Asia | Has China done well in its vaccine diplomacy in Southeast Asia? | ASEAN-China relations stay robust despite Myanmar's absence from virtual summit | A year on from the coup, Chinese New Year in Myanmar hijacked by politics