Washington’s new National Security Strategy has been carefully crafted, but the document hosts a number of inherent tensions. Foremost among them is the fact that putting democracy at the center of a strategy that is increasingly Asia-focused is ill-advised. 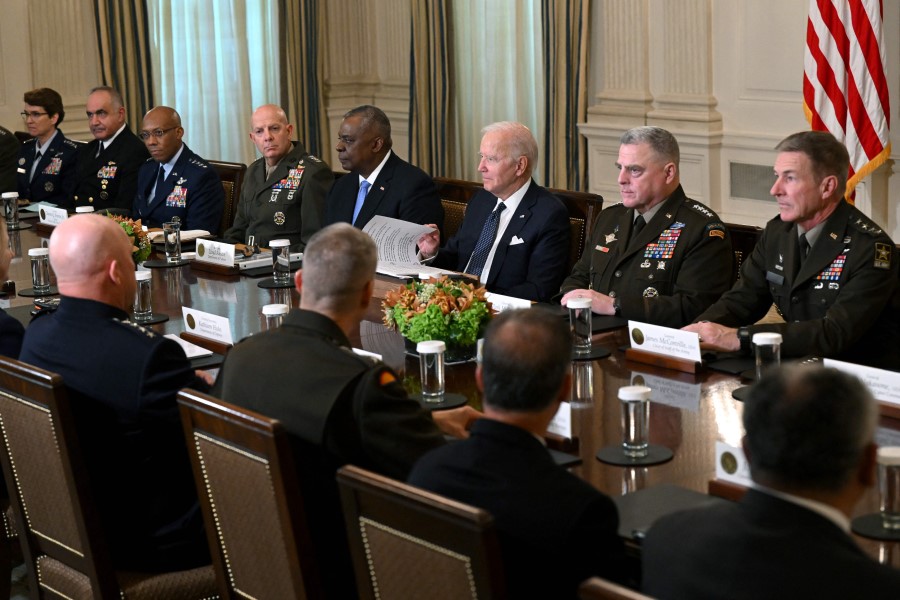 Candice Chan - 30 January 2023
A mall in Shenzhen came under fire for putting up white lanterns with black text as part of its Chinese New Year decorations, while an “ugly” rabbit-shaped light decoration was removed from another mall in Chongqing. Academic Zhang Tiankan muses on tradition and innovation, and the evolution of traditional decorations.
Read more
Translated by Candice Chan on 31 October 2022

The Biden administration released its National Security Strategy (NSS) on 12 October 2022, almost two years after Biden’s inauguration. Carefully drafted and relatively straightforward, the strategy asserts that the world “is at an inflection point” and that “we are now in the early years of a decisive decade for America and the world”. The administration promises to address what it calls “the twin challenges of our time: out-competing our rivals to shape the international order while tackling shared challenges”.

This first challenge focuses on two rivals: Russia and China. Russia is described as posing “an immediate threat” but China is labelled “the only competitor with both the intent to reshape the international order and, increasingly, the economic, diplomatic, military, and technological power to do it”. In other words, this strategy (like that of the Trump administration) identifies China as America’s top national security concern.

...this strategy reads like an Asia-first strategy codified by Europeanists.

One might expect, therefore, that the strategy would be oriented primarily toward the Indo-Pacific. Indeed, the strategy asserts that today’s world “will demand more of the US in the Indo-Pacific than has been asked of us since the Second World War. No region will be of more significance to the world and to everyday Americans…” But in several respects, this strategy reads like an Asia-first strategy codified by Europeanists.

US approach speaks less to Asians

Three tensions stand out. First, the document’s central theme is democracy, which plays well with Democratic voters and European allies, but is a harder sell in Asia and elsewhere around the world, given the fact that many of them have political systems which are less democratic than that of the US and Europe. Second, the strategy promises to “win the competition for the 21st century”, but most countries in Asia and beyond do not see themselves as part of a global competition between democratic and authoritarian blocs. Third, the strategy still lacks what Asian countries want the most: a robust economic approach.

The strategy’s focus on democracy should come as no surprise. Democracy was a central theme in Biden’s presidential campaign and his Interim National Security Strategy Guidance. His framing of the world as caught in a “competition between democracies and autocracies” plays well with Democrats’ domestic base, as well as most US allies in Europe. Most importantly, this is a theme that Biden and his top lieutenants personally believe in — and have for years.

Yet, putting democracy at the centre of an increasingly Asia-focused strategy is ill-advised. Appeals for democratic unity have far more resonance in the trans-Atlantic context than they do elsewhere. Few countries in the Indo-Pacific want to be at the centre of a competition between democracies and autocracies. In fact, many regional partners are not even democratic in the first place. For this very reason, the administration’s own Indo-Pacific Strategy references democracy only seven times, a far cry from the NSS’ 99 mentions.

Of course, democracy has a role to play in American strategy. US values are not cleanly separable from US interests, and democracy is a core value. Indeed, I have argued elsewhere that US strategy should be linked to values and that democratic principles can be an asset, helping to bind together some US allies. But making democracy the animating theme of an increasingly Asia-focused strategy suggests a basic disconnect in American strategic thinking.

The central role of democracy in the strategy raises a second challenge: the focus on “winning” a competition with autocracies. Few countries in Asia desire to prevail in this sort of competition. Most hope for good relations with the US, China, and others, regardless of their form of government. They want geopolitical stability, not democratic transformation. For them, the goal of a “free, open, secure, and prosperous” future does not require “out-competing China”.

Nonetheless, the strategy puts a premium on countries that are willing to be part of pro-democracy or anti-authoritarian coalition. It should therefore come as no surprise that the strategy insists: “At the heart of this coalition, to ensure it is as transformative as possible, are democratic nations who share our interests and values.” The core of this democratic grouping appears to be the Group of 7, which the strategy calls the “steering committee of the world’s advanced industrial democracies” yet includes only one Asian country. The strategy also calls Europe “our foundational partner in addressing the full range of global challenges”. Three minilateral groupings in Asia helmed by democracies — the Quadrilateral Security Dialogue, the Australia-UK-US pact, and the Five Eyes intelligence network — get repeated mentions, but are not quite as central.

...what most Indo-Pacific countries want more than anything is deeper US economic engagement.

It remains unclear what role this leaves for countries that are not democratic or do not want to be part of a transformative democratic agenda. The Association of Southeast Asian Nations appears to be a secondary player in this global competition, since few (if any) of its members want to take part. The same is true of the Pacific Islands. Chinese leaders will no doubt press their case in these regions that America’s transformative democratic agenda undermines stability.

This points to a final issue: what most Indo-Pacific countries want more than anything is deeper US economic engagement. Yet, the administration continues to disappoint in this regard. The strategy asserts “we have to move beyond traditional Free Trade Agreements”. But the Indo-Pacific Economic Framework, which does not entail market access, has not inspired many in the region. And the administration says it has “broken down the dividing line between foreign policy and domestic policy”, yet its recent actions have drawn allied ire for smacking of protectionism, particularly “buy American” rules.

What explains these inconsistencies? The NSS illustrates that while US strategists are increasingly looking to the Pacific, many of their conceptual frameworks remain Atlanticist in nature. But what works in a trans-Atlantic strategic context cannot simply be applied in the Indo-Pacific. If the US is ever going to truly “pivot” to Asia, it will require not just more attention and resources, but a fundamental change in thinking.