Zaobao correspondent Yang Danxu takes a look at China’s ailing property market and the various measures taken by property companies and the authorities to boost sales and ensure that homes are completed and handed over to buyers. While the intention is good, will they work under the current Covid-19 situation? 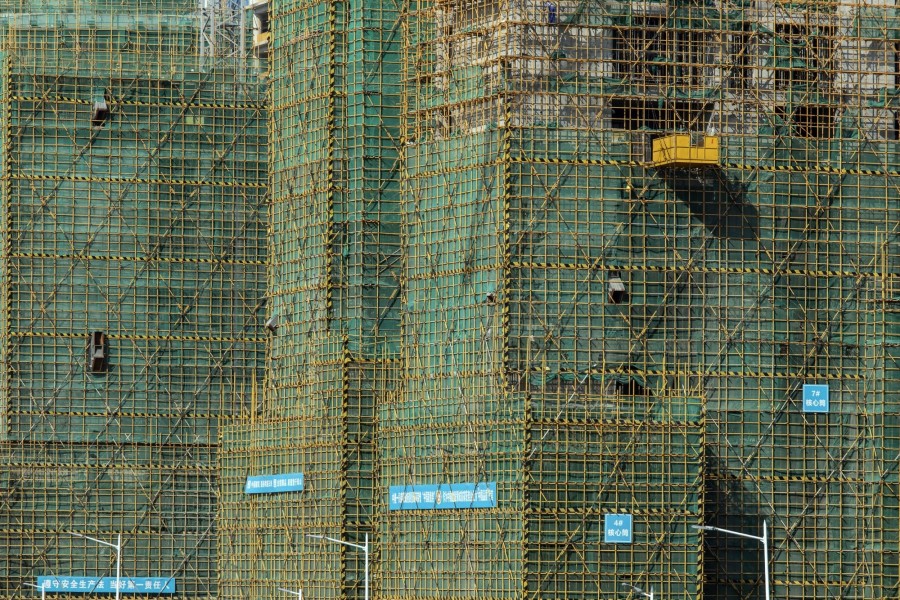 A building under construction in Shenzhen, China, on 19 November 2022. (Qilai Shen/Bloomberg) From electric blankets to natural gas: Europe’s dependence on China for winter heating

Candice Chan - 1 November 2022
As energy prices soar in Europe, the continent has been turning to China to get it through the approaching winter, from purchasing electric blankets and thermal stockings to importing natural gas. Zaobao’s China Desk explores the geopolitical factors involved and how Europe is both dependent on China and resistant to this dependence.
Read more Candice Chan - 31 October 2022
Now that the new Politburo Standing Committee has been appointed after the 20th Party Congress, it faces the biggest challenge of ensuring economic growth amid the repeated pandemic outbreaks. How long can the Chinese Communist Party maintain its zero-Covid policy before public frustration boils over?
Read more Candice Chan - 31 October 2022
Washington’s new National Security Strategy has been carefully crafted, but the document hosts a number of inherent tensions. Foremost among them is the fact that putting democracy at the center of a strategy that is increasingly Asia-focused is ill-advised.
Read more The UK's 'tilt' towards the Indo-Pacific may not be sustainable

Candice Chan - 27 October 2022
The UK has launched a robust “tilt” towards the Indo-Pacific. To its credit, it has executed a series of high-profile diplomatic engagements and military deployments to the region. The question, however, is not about London’s desire to engage with the dynamic region but whether this tilt can be sustained.
Read more Candice Chan - 27 October 2022
Zaobao correspondent Chen Jing notes that market confidence is still shaken after the 20th Party Congress, and there is little clarity on how the new team will realise China’s hopes of achieving high-quality development while zero-Covid measures remain in place.
Read more
Translated by Candice Chan on 23 November 2022

China’s property companies previously gifted homebuyers pigs and accepted garlic as down payment. Now they have come up with another sales tactic — ten years of free subway travel.

Chinese media recently reported that a company in Nanning, Guangxi, has promised ten years of free subway rides with a purchase of any of its housing units.

Property analysts estimate that the promotion is valued at 30,000 RMB (US$4,200). While it is not a huge sum, the offer of free subway travel has gained significant attention. Evidently, the developer had given much thought to the promotion.

Bartering farm produce for a home

Given China’s weak property market, property companies have come up with all sorts of tactics to sell homes this year. In June, a company in Henan accepted wheat as a down payment, whereby homebuyers received a rebate of about 2 RMB for each jin (600 grams) of wheat, up to a maximum of 80,000 jin or 160,000 RMB.

Property companies and local governments have come up with all kinds of unorthodox ways to boost sales. Many of them are gimmicks, but the huge pressure faced by the property market is real. Official figures released last week show that prices for new properties in 70 medium and large cities in China fell by 1.6%, the biggest drop in seven years and a decline for the sixth consecutive month.

Under pressure to stabilise the property market, officials have stepped up their efforts after the 20th Party Congress. The People’s Bank of China (PBOC) and China Banking and Insurance Regulatory Commission (CBIRC) released a 16-point plan this month to salvage the property market, encompassing the financing of property companies and the completion and timely handover of homes.

On 21 November, the two agencies announced the provision of 200 billion RMB to support bank loans for delayed pre-sold residential projects, with the funds earmarked to ensure that units are completed and handed over.

... the market believes that this is still an important step in rescuing the property sector as it would at least reverse the economic slowdown and promote a “soft landing” for the economy.

On the same day, during the Financial Street Forum, PBOC governor Yi Gang expressed his support for the steady and healthy growth of the property market, stressing that a virtuous cycle in the property market would be critical to economic development.

Some analysts believe that with the close of the 20th Party Congress and the Chinese Communist Party’s new leadership team made up of Xi Jinping loyalists, there will be more room to ease policies. The authorities’ recent measures to boost the property market and alleviate the high-pressure Covid-19 policies of the last three years signal that the property market and Covid-19 controls are gradually easing, and that authorities are shifting the policy balance towards growing the economy.

However, analysts said that while recent measures are focused on easing financing for developers, in terms of shoring up the property market, there is no direct stimulus for home purchases, and it also does not mean that China will reverse property market regulation or change the policy of “housing for living in rather than speculation”. But the market believes that this is still an important step in rescuing the property sector as it would at least reverse the economic slowdown and promote a "soft landing" for the economy.

In comparison, the anti-Covid measures make it tougher to eliminate economic disruptions. After the Chinese authorities released "20 measures" to optimise existing pandemic controls on 11 November, China is seeing its fastest-spreading outbreak to date, affecting major cities such as Beijing and Chongqing.

Data from Nomura Holdings show that 48 cities in China are currently imposing some sort of restriction on people’s movement at the district level or on a larger scale, affecting roughly one-fifth of China's total economic output.

Facing soaring Covid-19 cases, local authorities seem at a loss of what to do if they are to avoid implementing large-scale lockdowns and mass testing. Numerous indicators show that within just ten days, China’s easing of the dynamic zero-Covid policy has already run into problems, and various regions with serious outbreaks have backtracked and returned to the prior stringent anti-Covid measures.

Data from Nomura Holdings show that 48 cities in China are currently imposing some sort of restriction on people’s movement at the district level or on a larger scale, affecting roughly one-fifth of China's total economic output. Nomura economists also reported on 22 November that China’s path to reopening would be a “protracted and costly” one.

This “cost” is not only about the people’s health and safety, which authorities have repeatedly emphasised, but also the collapse in confidence due to the economic downturn. China’s economic growth in the first three quarters of the year fell significantly short of the growth target of 5.5% that authorities set in March.

While high hopes are pinned on Q4, strong growth would be difficult to achieve amid the current pandemic situation, the gloomy housing market and the flip-flopping of the Covid-19 policy.

China’s Covid-19 policy could enter a phase of constant vacillation, which means the pandemic will continue to disrupt the economy.

Optimists believe that as soon as the country resolves to end its stringent anti-Covid policy, with China’s massive market and strong growth potential, the economy will quickly recover and return to the rapid growth seen prior to the pandemic. However, it is easier said than done to abandon the tough measures given the current situation.

China’s Covid-19 policy could enter a phase of constant vacillation, which means the pandemic will continue to disrupt the economy. On this bumpy road to reopening, let’s hope that confidence and patience will not run out.

This article was first published in Lianhe Zaobao as “花式卖房下的经济困境”.