Visitors to Taiwan’s Sun Moon Lake are often awed by the hulking mountains and pristine waters. But notice a tiny pavilion on the water’s edge and you’d be reminded of the immense history this lake holds as a quiet retreat for the colourful leader Chiang Kai-shek — both to ponder the weighty political affairs and to reminisce about his hometown in mainland China’s Jiangnan region. Chiang Kai-shek and Soong Mei-ling in a boat on Sun Moon Lake. (Internet) Singapore Prime Minister Lee Hsien Loong: The world will not split into two, but neither can it return to the past

Grace Chong - 16 November 2020
Bloomberg News editor-in-chief John Micklethwait interviewed Singapore’s Prime Minister Lee Hsien Loong ahead of the Bloomberg 2020 New Economy Forum on 17 November. Among the topics they discussed, PM Lee spoke at length about China, the US, global trade, the internet, and most of all, the China-US relationship. This is an excerpt of the interview transcript.
Read more Grace Chong - 16 November 2020
Japanese Prime Minister Yoshihide Suga may have stolen a march on China by making an early move to secure President-elect Joe Biden’s support for any attack on the Senkaku islands or what the Chinese call Diaoyu islands. Even before he enters the White House, Biden seems comfortable reassuring Japan of America’s intention to uphold their commitments under the US-Japan Treaty of Mutual Cooperation and Security. Will this make China more defensive on the one hand, and more eager to court Biden on the other?
Read more Grace Chong - 16 November 2020
The little-known Qian Shan Shili had the opportunity to travel in the days of upheaval at the end of the Qing dynasty and at the dawn of a new republic. She was the first woman to record her thoughts in two travelogues and felt strongly that China’s new education system paled in comparison with that of other countries such as Japan. She concluded that education should have the aim of building critical-thinking men and women rather than just nurturing a crop of scholars with exceptional talent. After all, she notes, without citizens, how can there be talents? And without citizens, there can certainly be no society. These are wise words, says cultural historian Cheng Pei-kai, that remain relevant even today.
Read more Are Cold War-era slogans making a return in the internet age?

Grace Chong - 16 November 2020
Having lived through the Cold War era when people were misled by empty slogans and labels, Taiwanese writer Chiang Hsun cautions that we may once again find ourselves under the influence of such meaningless words in the noisy internet age. Have we lost our basic cognitive skills to observe and contemplate in solitude?
Read more Grace Chong - 16 November 2020
China has its army of housewives to thank for its early and deep foothold in e-commerce. The theory goes that with more time on their hands and being fiercely price-conscious, these housewives will never fail to take advantage of discounts for online shopping, and even more importantly, spread the word and get others to do the same.
Read more
Translated by Grace Chong on 10 November 2020

My good friend Gao asked if I wanted to visit Sun Moon Lake (日月潭) and have lunch together at The Lalu (涵碧楼). It was impossible to refuse such a warm invitation and we set off almost immediately from Taichung. In the past, if you wanted to go to Sun Moon Lake, you had to first pass Yuchi Township and Puli Township and suffer an arduous journey of twists and turns on mountainous roads for three to four hours. Then only would you be rewarded with a glimpse of emerald green waters cradled by the mountains. Following restoration works after the great earthquake of 21 September 1999, a new expressway linking Taichung and the Sun Moon Lake reduced the journey to just 50 minutes. My friend said that the expressway made it really convenient for mainland tourists to visit this scenic treasure of Taiwan.

My younger brother and I also drove on this expressway when we visited Hehuanshan (合欢山) three years ago. Strange, craggy peaks stood in the distance to our north. It was an amazing sight bestowed by the earthquake. Some were cliffs formed by tectonic shifts beneath the Earth’s crust; some were mountain ridges splintered into wayward peaks; others were mountain ranges stacked against each other when cracks in the earth caused the ground to sink. The irregular mountainscape before us was as if a child was playing with mud, then slowly but surely, got upset and started flinging and tossing whatever he could lay his hands on, leaving behind an unsalvageable mess. I recalled a poem in the Xiaoya (小雅) section of the Classic of Poetry, which describes the destructive power of an earthquake: “The crack of thunder and flash of lightning make one anxious. The fast river currents are like water brought to a boil. The mountain peaks suddenly collapse — the higher banks turn into valleys while the deep ditches rise to form hills.”

Now, I see these sights from the car again, but the peculiar mountains are covered by swathes of lush forest. Vitality shines through amid magnificence, like in the paintings Early Spring (《早春图》) by Guo Xi and Wind in Pines Among a Myriad of Valleys (《万壑松风图》) by Li Tang, where chiselled rock faces are enveloped in cloud and mist, leaving humanity awestruck by nature’s vitality. In less than a decade, what was decaying has been transformed into something magical and a “scenery template” of Chinese landscape paintings.

This window opening was in fact where a machine gun was installed so that secret service agents could monitor the lake for any suspicious activity at all times.

Admiring the scenery with affairs of the state in mind

The young Thao boatman who took us out on Sun Moon Lake entertained us with many legends of the Thao indigenous tribe. One was about their ancestors chasing a mystical white deer from Alishan to Sun Moon Lake for three days and three nights, only to lose sight of the deer when they arrived at the Lake. Even so, they found the Sun Moon Lake simply breathtaking and decided to settle there, thus becoming natives of a land embraced by the mountains. As our boat passed the side of The Lalu atop a cliff, we saw a striking pavilion near the water’s edge. The pavilion was sitting on a fortification of some sort — a platform of reinforced concrete that had a small foot-long square open window.

The young man asked, “What do you think the opening is for?” We guessed that it was perhaps for ventilation? No, he replied, and told us that its use was closely tied to the country’s destiny back in the day and could be considered a military and defence secret.

It turned out that whenever Chiang Kai-shek was free, he would come for a short stay at The Lalu and think about national affairs here. He liked to go for strolls with Soong Mei-ling, admiring the scenery of Sun Moon Lake together. They often sat at the pavilion and looked at the setting sun in the distance. This window opening was in fact where a machine gun was installed so that secret service agents could monitor the lake for any suspicious activity at all times. I couldn’t help but imagine this scene: as Chiang and Soong enjoyed the breeze on the lake and admired the brilliant moon in the mountains, secret service agents stood ready in the fortified chamber beneath the pavilion, aiming their machine guns at the lake’s abundant wildlife — what a mood-killer!

From our window seat at the restaurant at The Lalu, everywhere we looked was a scene right out of a postcard. One could have a panoramic view of Sun Moon Lake because it was sited right above the pavilion at the highest point of the hotel. We ordered their signature dishes featuring local produce such as mountain bamboo shoots, yam bee hoon wrapped in banana leaf, charcoal-grilled Manchurian wild rice stems, smoked chicken, and smoked eggs.

Gao asked if the restaurant also served freshly caught “President’s Fish”? The waiter said yes and Gao went ahead to order a plate of steamed President’s Fish. He told me that this fish is Sun Moon Lake’s specialty and was originally called “Aruzay” (曲腰鱼, quyao yu, or crooked belly fish) because of the fish’s slightly crooked belly. It is called President’s Fish because it was Chiang’s favourite dish — he had to eat it every time he visited The Lalu. Although it has many bones, the texture of its meat is tender and plump. Also, you can’t eat it anywhere else.

Thus, when Chiang fled to Taiwan and ate Aruzay, it would naturally be an unforgettable taste for him as it stirred up the memories of his childhood, his glorious days, and the tastiest delicacies of Jiangnan.

After a long wait, the fish was finally served — glistening, moist and garnished with curls of spring onion — on an oblong white porcelain plate. Taking a closer look, isn’t this Taihu Lake’s (太湖) white fish? The silver-scaled freshwater fish is commonly found in the Yangtze River basin. It can also be found in the Qiantang River and rivers in Zhejiang, and is a delicacy of the Jiangnan region. It must have been a familiar taste of home to Chiang. I tasted a piece of belly meat and it was indeed delicious, fresh and tender. No doubt about it, it is the white fish from Taihu Lake — a freshwater fish with the scientific name of Culter alburnus. In fact, a nod to this fish features in Water Margin (or Outlaws of the Marsh), one of the Four Great Classical Novels of Chinese Literature. Song Jiang, leader of the 108 bandits who gathered in Shandong's Liangshan Marsh, met bandit Zhang Shun, nicknamed “white stripe in the waves”, when Song was exiled to Jiangzhou in what is now Jiangxi province. Zhang's nickname refers to this kind of white fish.

Thus, when Chiang fled to Taiwan and ate Aruzay, it would naturally be an unforgettable taste for him as it stirred up the memories of his childhood, his glorious days, and the tastiest delicacies of Jiangnan. While locals of Sun Moon Lake do not know the deeper meaning behind this dish, their naming it the President’s Fish hit the nail on the head nonetheless, as it captures Chiang’s yearning for his hometown.

Related: Taiwan’s nostalgic flavours, the glitterati and the kamikaze | Wintersweet scents in Jiangnan | Art and history in a bowl of Suzhou noodles | Beijing’s instant-boiled mutton and sweet memories of childhood days in Taiwan | [Photo story] The Dixie Mission during WWII: First contact between the US and the CCP 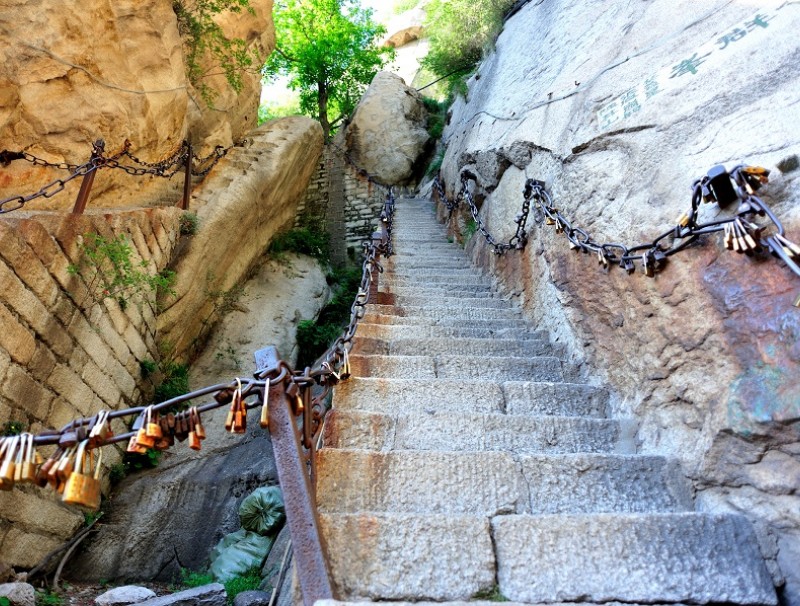 Culture
Woman traveller of the Qing dynasty Qian Shan Shili: Education is the bedrock of a nation