Chicken rice for the Singaporean soul

With Singapore HeritageFest around the corner, ThinkChina’s Charlene Chow counts the ways she finds a friend in chicken rice. 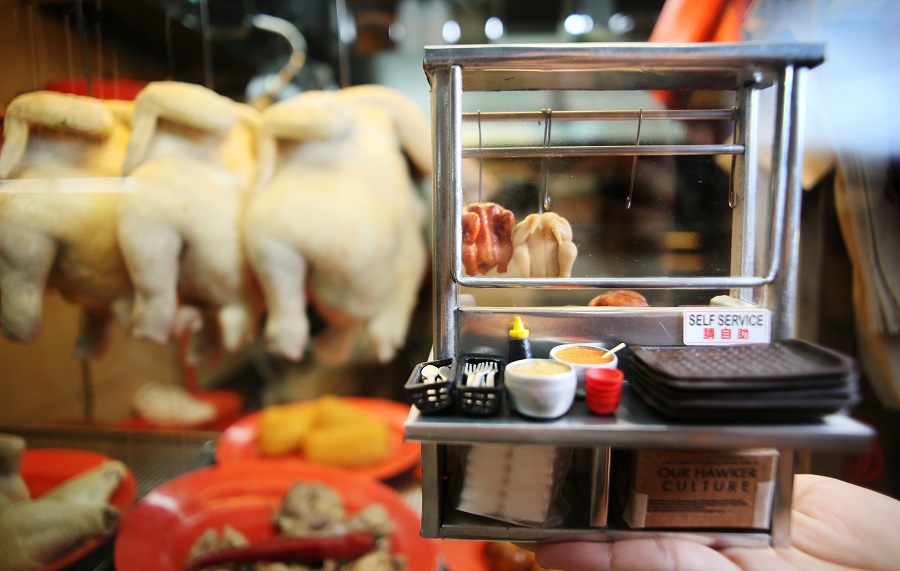 A miniature chicken rice stall photographed in Maxwell Food Centre in 2018. Singapore's hawker culture has been Inscribed in 2020 on the UNESCO's Representative List of the Intangible Cultural Heritage of Humanity. (SPH Media)

Grace Chong - 21 June 2022
In pursuit of better working conditions, China's post-00s generation has gained a reputation for being newbies who are difficult to manage and who show their superiors little respect. While those who go to extremes may be in the minority and some admire their brave fight for workplace rights, ultimately, they may be putting their job prospects in jeopardy.
Read more
Translated by Grace Chong on 26 April 2022

“This feels like a chicken rice kind of day.”

Rather than popping champagne or reaching for a tissue to blow on, I’d usually seek out a plate of chicken rice when something happens, good or bad.

Depending on the inciting incident, light steps or leaden legs would take me to the nearest familiar chicken rice stall. The destination would likely have been an eatery in the east. Until they too closed down not too long ago. These days, of course, the fingers do the walking on delivery apps.

I made a love call to chicken rice recently, as it happens, after receiving some upsetting news. As soon as the order arrived, I pried open the plastic boxes. “Clack clack” they went, coming loose after a bit of a struggle.

Then came the ritual of preparing the sauces: first, opening the sesame oil-soya sauce packet gingerly, then showering the chicken with the sauce, like watering plants with a spray bottle. Next, preparing the dipping sauce of chilli sauce, ginger paste and black sauce.

This time, however, as my hands worked, my eyes clouded over till it seemed like they were looking past a waterfall or frosted glass. I didn’t blink, not wanting to recognise there was a need to, but finally, I did. Luckily the proportions of each component were not mangled too much. Red and black daubs of sauce with specks of yellow took their usual places on the saucer. Rather shaped like the yin-yang symbol, in retrospect.

Tucking into the dish, the texture of the chunky chicken pieces was softer than usual. No complaints there. The beige rice beads glistened and were a little more moist to the bite. A recipe tweak perhaps? Busy thoughts all the better to keep the upsetting news at bay.

...if there has to be a national dish, it just might be chicken rice.

Of course, the dish was a part of happier occasions too. Like the time the extended family had a meal together after aeons. We unanimously agreed to meet at a chicken rice restaurant located midway between all of us. The whole white chicken was the star dish and a foil for otherwise awkward banter.

Perhaps chicken rice, this dish of poached/roast chicken paired with an aromatic rice cooked with chicken fat, works as a comfort food because it’s easily found in coffee shops, hawker centres and restaurants and fits right in, whether as a humble dish or an elevated “institution in an institution”, aka Mandarin Chicken Rice of Chatterbox, now in Hilton Singapore Orchard.

And while the dish is common, its ancestry is unique. The chicken rice in Singapore is generally acknowledged to derive from Hainan Island’s Wenchang chicken. Chinese immigrants from that part of the world settled here and gradually modified the recipe. If we consider broader linkages, the dish bears some similarities to the bai qie ji or bai zhan ji in Cantonese cuisine and the wider canon of Chinese cuisine too.

Over time, its well-loved taste has transcended boundaries. Indeed, if there has to be a national dish, it just might be chicken rice. Living abroad some time ago, kind friends would send care packs of Prima laksa paste or vacuum-packed bak kwa. But it was the flavours of chicken rice that I would miss.

In fact, the dish is so loved that friendly banters would sometimes break out across the causeway about the Singaporean and Malaysian versions of the dish. And at one time, chicken rice was tossed up as a possible heritage item to be put up as an intangible cultural heritage entry to UNESCO. Surveys done at the time showed that it is one of the favourite foods of the nation.

Like a football team, each player or component has an assigned role.

Perhaps one reason why chicken rice evokes highly personal food memories is that it’s a sum of its distinctive parts. Like a football team, each player or component has an assigned role. The sheen on the chicken skin draws the wows as the dish steps on to the pitch; the meat midfielders — the loping lean ones, the rough-and-tumble squarish ones, the bony ones — create goal-scoring chances; the cucumber, parsley and soup bring up the rear; and of course, the chilli/black sauce/ginger and rice tag team score and bring the dish home. And each team builds on their unique traits, mascots and fan base.

So we end up having our own list of favourite chicken rice stalls, loving them for certain elements of the dish or for the stall’s backstory and quirks. If I think of a few good “kee-mpanions'' amassed along the way, they’d probably include those often visited with colleagues, like Sin Kee at Margaret Drive, which moved to Mei Ling Food Centre and then Holland Drive, or Wee Nam Kee at United Square. Or the ones nearer home — from the boisterous and retro Nam Kee in Upper Thomson, to those near the east like Boon Tong Kee and Five star Hainanese Kampung Chicken Rice. Time spent with each new acquaintance is intertwined with life’s little events.

Not the dish itself but what it represents

The long and short of it is that chicken rice feels near and dear as it has always been a presence in our lives. In our childhood, Mum and Auntie E would labour in the kitchen to serve up the white-complexioned beauties. I remember the “scat scat scat” of the chopper and the waft of pandan leaves in the kitchen whenever it was chicken rice day.

I asked mum why we had chicken rice so frequently back then. I reminded her that jie's friend once said that too much chicken gave dark eye rings and I was quite sure that we were rather afflicted by this with the amount of chicken rice we consumed. She said simply, “Those days, one chicken can feed a family of five. You girls would get the drumsticks, and we’d divide up the rest.”

As with good friends, you don’t meet them often, you don’t talk often, but you think of them at points in time. And when you do need them, they’re not so far away.

Later on, we switched to the roast variety, and we patronised one particular stall in the industrial estate in Ang Mo Kio. On Sundays, we made a pilgrimage in the car, almost silently for some reason, to pick up a whole chicken. The modest chicken rice wrapped in brown paper was fragrant, the chilli piquant, the chicken moist. The ensemble was practically a member of our commune.

Into adulthood, I suppose it’s no surprise that chicken rice remained a companion of sorts. As with good friends, you don’t meet them often, you don’t talk often, but you think of them at points in time. And when you do need them, they’re not so far away.

But the beauty sometimes is not in perfection but in appreciating quirks and accepting the warts that come with the whole package. And in sharing these friendly encounters with those we dine with.

Of course, sometimes you wish you could form your own all-star team plate of chicken rice — chicken from Sin Kee Holland Drive, the rice from Five Star, the chilli concoction from Boon Tong — wouldn’t it be heavenly? But the beauty sometimes is not in perfection but in appreciating quirks and accepting the warts that come with the whole package. And in sharing these friendly encounters with those we dine with.

Like you for instance who can no longer eat chicken rice that often — that’s ok. We can still have the chicken with a bowl of white rice I’ll cook for you.

Related: Full Circle: Ruminating on the round in Chinese New Year dining | Remembering a mother’s beautiful smile and Suzhou's ‘Sixth Moon yellow’ crabs | Beijing’s instant-boiled mutton and sweet memories of childhood days in Taiwan | The power of food memories in shaping who we are