China and the US not ready for showdown over Taiwan

During their phone call on 28 July, US President Joe Biden and Chinese President Xi Jinping made their positions clear on Taiwan and asked their staff to explore an in-person meeting. The verdict is still out, but it is unlikely that either of them will let US House Speaker Nancy Pelosi’s surprise move checkmate US-China relations into a direct military conflict they both do not want. Grace Chong - 25 July 2022
Vancouver-based academic Leo K. Shin remembers his former professor, eminent historian and sinologist Yü Ying-shih, on the first anniversary of the latter’s passing. He says Yü was a staunch defender of humanity intrinsic in Chinese culture who always spoke up against the use of cultural tenets for political gain or acts against human dignity. It comes as no surprise then that he understood well the significance of Hong Kong as a beacon of freedom, democracy and human rights.
Read more 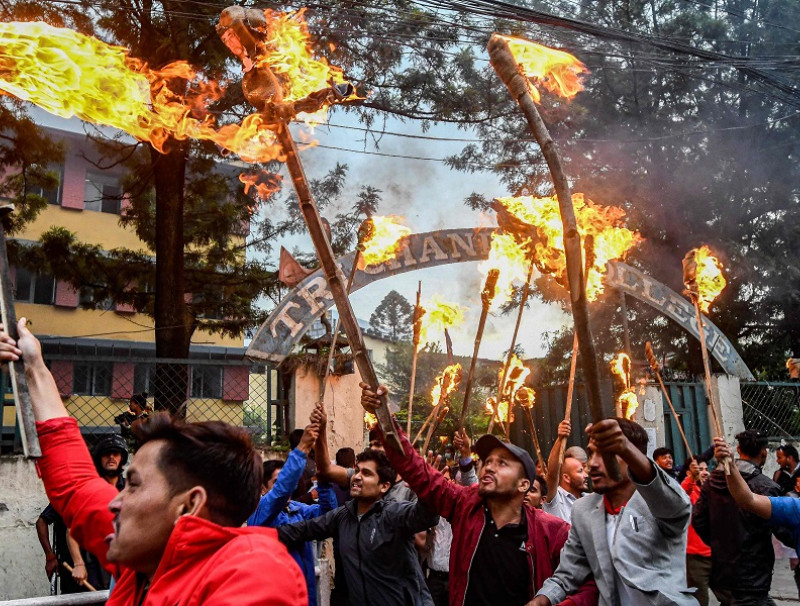 The US-China contest in Nepal

Grace Chong - 25 July 2022
While the last thing it wants is to be caught up in the crosshairs of US-China competition, Nepal is in the spotlight with the recent passing in the Nepali parliament of the US$500 million MCC-Nepal compact with the US. The US and Nepal have both denied that this grant is tied to the US’s Indo-Pacific strategy, but China is riled up as India watches closely.
Read more Grace Chong - 18 July 2022
The proposal to build a physical bridge between Taiwan's Kinmen and mainland China's Xiamen has aroused political debates in Taiwan. While the project could boost local economies and people’s livelihoods, some are concerned that constructing a cross-strait bridge is a pro-China move that would compromise Taiwan’s security imperatives and efforts to build a “Taiwan identity”. Taiwan academic Liu Chin-tsai looks at the implications and debate surrounding the proposed infrastructure.
Read more Interview with Ren Yuanlin: A Chinese shipbuilder’s venture into new waters of finance

Grace Chong - 18 July 2022
In this exclusive interview by Zaobao journalist Yush Chau, Yangzijiang Financial Holding (YZJFH) executive chairman Ren Yuanlin charts the key milestones in his successful shipbuilding career — rising through the ranks from a shipyard apprentice to executive chairman, recovering from a corruption scandal and entrusting his son as his successor — along with his transition into the financial world.
Read more Chinese President Xi Jinping and US President Joe Biden finally spoke over the phone on 28 July. US officials earlier said that the talk could cover the Russia-Ukraine war and China-US economic competition. But the question uppermost on people’s minds is if US House of Representatives Speaker Nancy Pelosi will visit Taiwan and potentially spark a direct China-US military conflict.

In theory, since Xi and Biden are on speaking terms, it is unlikely that Pelosi will visit Taiwan. China expects countries it has diplomatic relations with to recognise the “one China” principle, which specifically includes not having any kind of official dealings with Taiwan. Beijing is likely to have extracted some form of commitment from Washington, or at least a postponement of Pelosi’s visit to Taiwan; otherwise, the phone call would not have taken place.

Of course, this is just speculation. At the time of writing, both China and the US have released very little information to the public, suggesting that the call could have ended badly.

Over the past week, US-China tensions have increased amid Pelosi’s potential visit to Taiwan. Beijing sternly warned the US against the move, with the People’s Liberation Army (PLA) stating that if it happened, it “would not sit idly by”. Biden also said indirectly that the US military was opposed to Pelosi’s trip. But several congressmen on both sides of the aisle and Trump-era top officials have strongly supported Pelosi’s trip, saying China should not be allowed “to dictate who can visit Taiwan and who cannot”. Several congressmen also urged Biden to abandon strategic ambiguity on Taiwan and publicly declare that the US will intervene and support Taiwan if a cross-strait war broke out.

Waiting to see who blinks first

US and China leaders are under pressure not to show weakness to each other. Buttressed by strong support from Congress members, Pelosi’s Taiwan visit looked to be a sure thing at one point. Michael McCaul, lead Republican of the House Foreign Affairs Committee told the media that he and Gregory Meeks, chairman of the House Foreign Affairs Committee, have been invited by Pelosi to join the Taiwan visit, as has Congresswoman Anna Eshoo of the Democratic Party. Ironically, both McCaul and Eshoo declined the invitation citing scheduling conflicts.

Actually, these politicians acted out with the intention of giving the Biden administration a hard time and making a fool of Biden. Since Biden has said that Pelosi’s Taiwan visit would “not a good idea”, cracks in the Democratic Party would show if Pelosi, a member of the same party, insists on making the trip. Also, if China-US relations are aggravated as a result, Biden would be left to clean up the mess. And if Pelosi does not end up going to Taiwan after all, Biden would be criticised for going soft on China.

However, a closer study of American reports in the last two days shows that not everyone within and outside American political circles supports the visit. Some voices of anxiety are speaking out.

Chinese politics expert and former deputy assistant secretary of state Susan Shirk said that amid the “extremely tense” situation in China in the months leading up to the 20th Party Congress, a trip by Pelosi to Taiwan could be seen as a “humiliation of Xi Jinping’s leadership”. She thought it best for Pelosi to postpone the trip rather than run the risk of sparking a military crisis. Think tank academic Bonnie Glaser and former Australian Prime Minister Kevin Rudd similarly recommended that the visit be postponed until after the 20th Party Congress.

Meanwhile, Democratic senator Chris Murphy pointed out that the US should be “purposeful”. “If we’re going to change our Taiwan policy, let’s make it a collective decision to do so. Let’s not do it by accident through a series of uncoordinated steps,” he said.

A commentary by the Washington Post editorial board on 27 July unexpectedly expressed opposition to Pelosi’s trip. It said Biden should neither have mused publicly about the sensitive issue of Pelosi’s visit last week nor voiced the military’s opposition because the latter “created two problematic appearances”. One, that Biden “has knowledge of possible Chinese threats to Ms Pelosi or the official aircraft she might use”; and two, that “the military, not its civilian leadership, determines policy”. Hence, Biden’s open response “made it impossible for China to remain silent on the matter”.

... if Pelosi does visit Taiwan, it is highly possible that PLA warplanes would “escort” Pelosi and cross the median line of the Taiwan Strait, or even fly directly over Taiwan.

The commentary also pointed out that Pelosi “not only has a right but an obligation to express solidarity with democratic Taiwan as she sees fit”. If the trip is cancelled because of pressure from Beijing, it would be to “concede Beijing an implicit veto over US relations with the island”. However, the commentary went on to say that Pelosi should postpone the trip to Taiwan because with the war in Ukraine still raging and likely to escalate soon, the US and the world “can ill afford an avoidable military showdown with China, much less one that might begin with Chinese planes forcing down a US plane carrying Ms Pelosi”.

Not yet point of no return

These discussions point to a fundamental question: is the US ready for a military showdown with mainland China over Taiwan? Put plainly, have China and the US reached the point of total opposition?

The answer should be “no”.

The great power struggle between China and the US over Taiwan is like a fight between two evenly matched opponents...

The reservations expressed by the Biden administration and the Pentagon and the advisers above are in fact made in a bid to dissuade Pelosi and delay her from making her swansong Taiwan trip before stepping down.

Similarly, Beijing has no intention of being in total opposition to the US right now, and it is an almost impossible prospect for the PLA to shoot down the plane carrying Pelosi. However, if Pelosi does visit Taiwan, it is highly possible that PLA warplanes would “escort” Pelosi and cross the median line of the Taiwan Strait, or even fly directly over Taiwan. Simply put, Beijing will take this opportunity to react disproportionately, further assert its sovereignty over Taiwan and draw up new boundaries in its favour in retaliation against Pelosi’s trip, which it considers a major provocation.

... a showdown at this point in time is not good for anyone. No one has an assured chance of winning.

It can be expected that this is all in Washington’s calculations. The great power struggle between China and the US over Taiwan is like a fight between two evenly matched opponents — if one side makes a sudden move, the other side seemingly loses the upper hand. But if the latter makes a strong counterattack, the pressure returns to the former. However, if Beijing overreacts, it could also unleash another round of international backlash and get itself trapped in yet another disadvantageous position. Hence, a showdown at this point in time is not good for anyone. No one has an assured chance of winning.

Between 26 and 27 July, major Chinese Communist Party (CCP) cadres at the provincial and ministerial levels attended a study session in preparation for the 20th Party Congress in Beijing. Xi made important remarks at the session, setting the tone for the fast-approaching congress.

Since China and the US are not prepared for a showdown over Taiwan at this point in time, the answer is essentially clear as to whether they would let Pelosi’s surprise move trigger a premature military conflict between both countries. Undoubtedly, nobody can guarantee that Pelosi will not take the trip. After all, the White House has no control over the US House Speaker. Since this is so, whether both sides can somehow make a quid pro quo and turn the situation around would certainly be a stress test of China-US mutual trust.

Related: Will Pelosi visit Taiwan this time? | Biden's 'gaffe' on Taiwan reflects changing status quo in the Taiwan Strait | Xi-Biden meeting unlikely as China-US relations stay locked in stalemate | The Pelosi visit that wasn’t: How should China respond to provocations from US politicians? | Why Taiwan is not Ukraine