China should avoid labelling South Korea as a Western nation

It would be rather extreme of China to peg South Korea as a key member of the Western camp because of its political system and values, says US academic Wu Guo. South Korea and China are inseparable in terms of culture, history, economy and people ties. It might be more accurate to view South Korea as a buffer between China and the West. 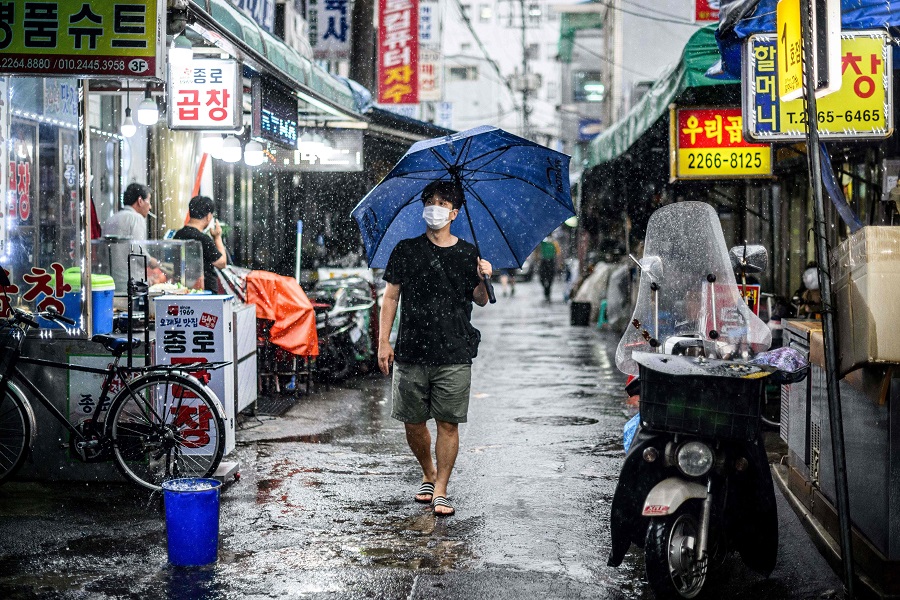 A man uses an umbrella to shield himself from the rain while walking past shops along a street during a downpour in Seoul, South Korea, on 30 June 2022. (Anthony Wallace/AFP)

Grace Chong - 5 August 2022
In life as in death, food brings people together and is a means to commune with one another, as seen in rituals during the seventh lunar month or Hungry Ghost Festival. Perhaps in feeding the spirits of the dearly departed, the unknown and indeed their own, people are reminded that an ending is not the end and that the bond between the living and dead is never broken.
Read more
Translated by Grace Chong on 28 July 2022

Recently, a commentary by a Chinese Academy of Social Sciences academic said that China should no longer regard South Korea as an Asian country given the latter's westernised political system, values and level of economic development. Its stance on China was also increasingly like Japan's.

The commentary serves as a good reminder that we should look beyond cultural affinity and geographical proximity between South Korea and China to see that South Korean politics and society have westernised. However, it would be rather extreme of China to peg South Korea as a core member of the Western camp.

Indeed, South Korea's security is underpinned by the US. It is an East Asian country that has transformed its economy successfully to be part of the Western world economy with the US as its primary export market. It is also a successful model of East Asian democratisation. However, South Korean culture and political sentiment are more complex than that of true-blue “Western countries”.

Democracy in South Korea is not an American spin-off that worked from the start but a culmination of years of struggles by the South Koreans.

Since the 1950s, leftists have been active in South Korea. The left-wing elements usually advocate for the reunification of the two Koreas as well as goodwill and patience towards North Korea. They are usually interested in understanding and forging ties with non-Western countries such as China, and in fact, have a certain longing for these countries. Domestically, leftists push for progressivism and economic equity, and champion labour rights.

Democracy in South Korea is not an American spin-off that worked from the start but a culmination of years of struggles by the South Koreans. Early South Korean political leaders hailed from the right, and left-wing activists played an important role in opposing dictatorship, fighting for democracy, and advancing subsequent struggles against political oligarchs.

I know a South Korean political science professor who was a student leader fighting against authoritarian rule in the 1980s who was incarcerated as a result. Originally, he intended to further his studies in the Soviet Union but ended up in China when the Soviet Union collapsed. After obtaining his doctorate at Peking University, he returned to a democratised South Korea and became a teacher, researcher and translator of modern Chinese politics. His experience is typical of his generation of leftist intellectuals.

When it comes to China’s development, the professor is full of admiration and understanding. As a self-professed leftist, he opined that China’s unprecedented reform and opening up will definitely encounter all sorts of challenges. As for Xinjiang, a point of contention between China and Western countries, this professor who had been to the region believes that economic development and tackling poverty should take centre stage.

South Korea’s traditional Sadae (serving the great) diplomacy, geographical location and cultural ties with China mean that it is very difficult for the country to rid itself completely of Chinese influence and factors to become a true Western country.

In fact, former South Korean presidents such as Kim Dae-jung, Roh Moo-hyun and Moon Jae-in were progressive leftists. The fact that the incumbent, Yoon Seok-youl, who is from the right,  only won the presidency by a narrow margin shows that both left- and right-wing factions in the country have been struggling with each other.

It remains to be seen whether the future South Korean governments will continue to adopt a pro-US stance to curb China. After all, South Korea’s traditional Sadae (serving the great) diplomacy, geographical location and cultural ties with China mean that it is very difficult for the country to rid itself completely of Chinese influence and factors to become a true Western country.

During a visit to South Korea a few years ago, I noticed the following phenomena: First, South Korea is deeply influenced by Chinese culture. The Ming imperial court ordered the construction of the Dongmyo Shrine in Seoul after the Imjin War in 1592 to commemorate the defeat of the Japanese forces by the Chinese and South Koreans. Today, it remains a famous attraction in Seoul and boasts a collection of plaques with Chinese inscriptions in praise of Guan Yu, the Chinese god of war.

Second, I saw young South Korean undergraduates late at night taking turns to stand guard beside the Comfort Women Statue outside the Japanese embassy in Seoul to prevent it from being removed by the government.

These two observations show that historical problems continue to plague the relationship between Japan and South Korea and show no sign of abating even today. This is also why the “Japanisation” of South Korea is next to impossible.

Third, on a visit to the Korean Demilitarized Zone (DMZ), it was evident that the United Nations/American forces were firmly in charge. They were responsible for briefing visitors, but the South Korean soldiers became props for visitors to take photographs with.

Even though the inequality of US-South Korean ties is the price that South Korea has to pay for being allowed to develop and gain strength under the protection of the US, this fact still rankles South Koreans who are known for their pride, especially the leftists.

As a lecturer and researcher of history, I could not help but ponder why there were no South Korean voices on the Korean War. However, the area is only open to foreign nationals and not South Korea citizens.

The DMZ visit that day included visitors from the US, Japan, Singapore and the Philippines, but not a single South Korean due to governmen fears that disaffected South Koreans would use the chance to defect to North Korea. This layer of complexity is something that Japan does not have to face. Even though the inequality of US-South Korean ties is the price that South Korea has to pay for being allowed to develop and gain strength under the protection of the US, this fact still rankles South Koreans who are known for their pride, especially the leftists.

Fourth, South Koreans have an affinity for the Chinese language and Chinese culture, and are learning them systematically. They also have in-depth knowledge of China. For instance, I was astounded to learn that a Canada-educated South Korean friend who neither speaks Chinese nor has been to China knew the minor detail that Zhou Enlai was a student of Nankai Middle School and Nankai University.

South Koreans have also become more familiar with the names and leadership styles of recent Chinese leaders. The fact that South Koreans follow the news about these leaders and even evaluate them, makes them completely different from the Westerners who are typically either clueless about China or only focus on unflattering news of the country.

South Korea is an intermediate zone country that might be closer to China.

Pull instead of push

Regardless of South Korea’s economic and technological prowess, and its adoption of a Western political system and values, it is still inseparable from China because of cultural, historical, economic and people ties.

Even when it comes to national security and foreign relations, the struggle between the left- and right-wing factions in South Korea, and the reality of having to strike a balance between China and the US, mean that the country’s position will continue to sway back and forth.

As for China, rather than labelling South Korea as a Western country, it would be more constructive to view it as a country in the “intermediate zone” (a concept first proposed by Mao Zedong) and a buffer between China and the West. In fact, South Korea is an intermediate zone country that might be closer to China.

However, negative sentiment towards China has been on the rise in South Korea, mirroring the situation in some developed countries. Usually high interest in learning Chinese and appreciating Chinese culture has also dropped and people are turning to learning Japanese instead.

Therefore, if China is to draw intermediate zone countries such as South Korea towards itself instead of pushing them further away, it needs to be more open, understanding and tolerant, and avoid labelling them as Western countries.