While the UK imports a high volume of goods from China, it exports many sought-after services in areas including finance, law and accounting. Its latest niche is its expansion into education, targeting the Guangdong-Hong Kong-Macau Greater Bay Area. 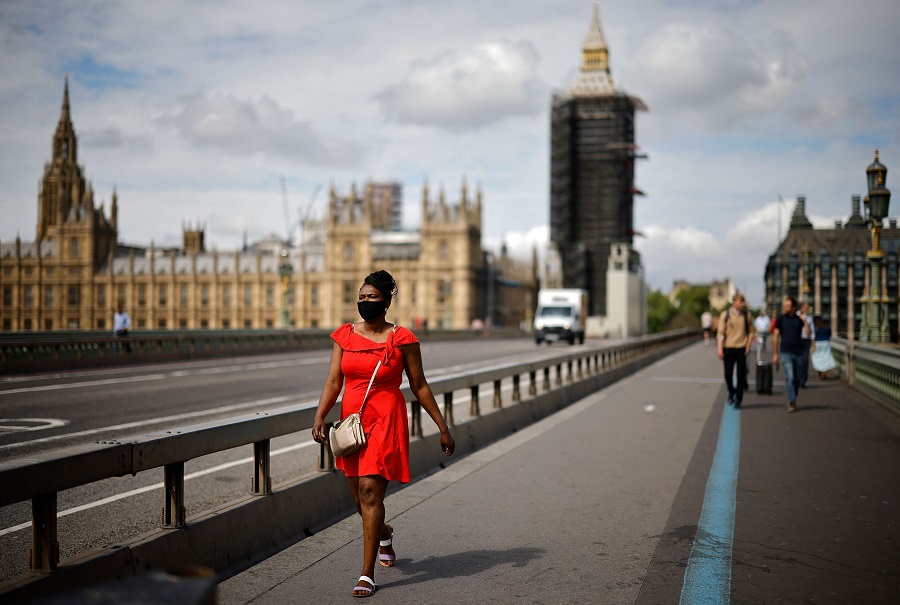 A pedestrian wearing a face mask walks over Westminster Bridge near the Houses of Parliament in central London on 7 June 2021. (Tolga Akmen/AFP)

Grace Chong - 13 May 2022
Despite the decline in daily new Covid-19 cases over the past week, Shanghai has seen stricter anti-epidemic controls implemented to the point of absurdity. Zaobao correspondent Yang Danxu highlights the stranger-than-fiction happenings in Shanghai that have sparked public outrage and shaken people’s confidence in China’s zero-Covid policy.
Read more
Translated by Grace Chong on 14 June 2021

China has surpassed Germany to become the UK’s biggest single import market in the first quarter of 2021, with the import of Chinese goods occupying 16.1% of the UK’s total goods imports.

Since the outbreak of the Covid-19 pandemic, the UK has been buying more Chinese textiles for the making of masks and personal protective equipment, China-made communication and audio equipment, and other products. This is just the short-term reason for the increase in the UK’s import of Chinese goods.

Notably, imports from China to the UK in the first quarter of 2021 increased by two-thirds when compared to the same period in 2018, illustrating the trajectory in the two countries’ trade relations.

Amid intense China-US competition, the US rallying support from its allies to contain China has resulted in conflicts between China and the UK in recent years. However, in the absence of a major blow, the above trend is likely to continue.

Service exports make up for wide deficit in goods

Anglo-Saxon capitalism advocates globalisation. Amid globalisation, the UK has often reported a trade deficit. Advocates of globalisation believe that regardless of whether the UK buys more goods from China or from Germany, as long as the welfare of British society improves, it is acceptable.

The UK’s composition of national income is also different from that of East Asian countries or regions. The UK’s total export of goods in 2019 was about 88% of Hong Kong’s in value. In 2020, Hong Kong’s exports remained rather constant, while the UK’s shrank by 9.9%. As a result, the gap between Hong Kong and the UK’s exports in 2020 should be even larger than in 2019.

On the other hand, between 2016 and 2020, China’s annual trade surplus with the UK ranged from US$32.7 billion to US$52.8 billion. According to The Sunday Times in the UK, Chinese investors have chalked up UK assets worth nearly £135 billion.

Service sector is the UK’s strength

English is a widely used language internationally, and many countries and regions use legal and professional systems such as the accounting system started under British common law. London is a major global financial market, and the UK has a good education system and a long history of multinational companies.

All of this has given the UK service sector — especially the high-end service sector — a global competitive edge. The UK's multinational financial, legal, accounting, education, and other service sectors are generally better recognised around the world than its export products.

Guangdong province is planning to develop the Guangdong-Hong Kong-Macau Greater Bay Area into a pilot area for international education, while many UK educational institutions are moving into China, particularly in terms of bringing their professional services to the Greater Bay Area.

Compared to the UK, the US has a larger financial market. New York is the ideal funding market for many successful companies from various countries, which has benefited well-known US investment banks and related legal services.

Of course, their UK counterparts are also actively seeking opportunities, but in comparison, so far the UK’s education services sector is still very attractive to students from many countries, and the UK economy has no doubt also benefited from this.

With growing incomes, Chinese residents want more choices in education. Guangdong province is planning to develop the Guangdong-Hong Kong-Macau Greater Bay Area into a pilot area for international education, while many UK educational institutions are moving into China, particularly in terms of bringing their professional services to the Greater Bay Area.

Recently, Jo Hawley — the British Consul-General for Guangzhou — said in an interview with Phoenix TV that UK institutions have set up 300 to 400 schools, courses, or vocational training projects in the Greater Bay Area.

Some rich China families plan to send their children overseas for their higher education, but want them to complete their primary and secondary education in high-calibre international settings within China.

In view of such market demand, a UK private school has set up a branch in Zhuhai, where it has been expanding its student intake and built a new school campus, reflecting that the school is getting its projected returns and is confident about its outlook.

In a macro sense, these are also a part of the UK’s service exports.

The global situation today is complex and full of contradictions. And when it comes to business, UK educational institutions have adapted to operating in China and are growing smoothly, without being caught in a difficult situation due to the UK government’s shift in position towards China.

Related: Xi's five-year plan for Shenzhen: A hard road ahead? | ‘Countering sanctions with sanctions’: Where China’s confidence comes from | Why the Chinese public is unenthusiastic about further reforms and opening up