Despite its economic benefits for locals, rare earth extraction has become quite a headache for the people of Ganzhou, Jiangxi province. They have been left with toxic water and contaminated soil which has an impact on the livelihoods of farmers nearby. With a lack of funding and technology, how can local governments clean up the mines? 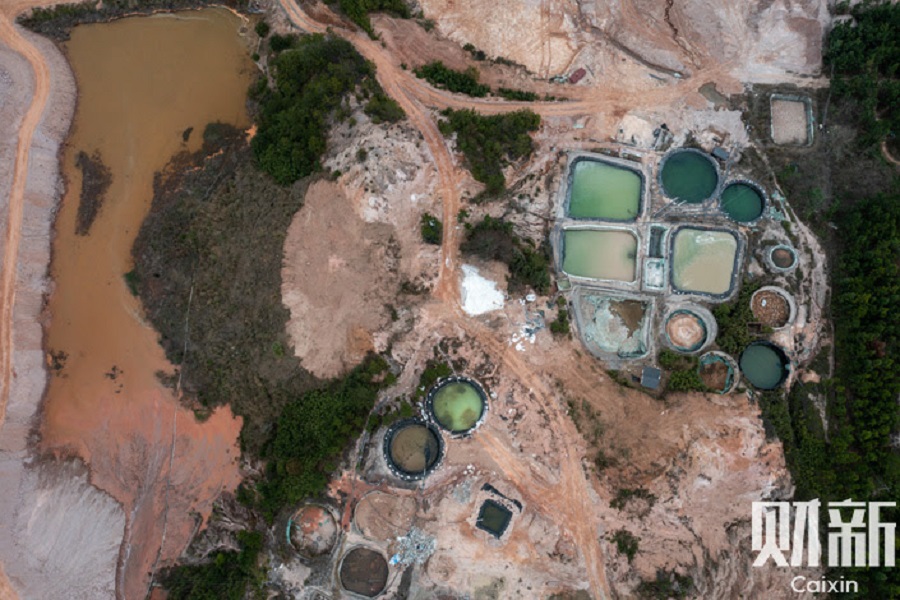 Grace Chong - 1 December 2022
US academic Zhu Zhiqun gives an assessment of the late former President Jiang Zemin’s policies during his time leading China throughout the 1990s and into the early 2000s.
Read more
Translated by Grace Chong on 5 May 2022

Toxic white foam coats the surface of green waters in the eastern city of Ganzhou. As far as the eye could see this past March, almost every mountain and hill surrounding the area’s rivers were scarred from mining activities in the Jiangxi province city, one of China’s largest production bases for rare earth elements.

In order to harvest the resource — crucial to the manufacture of many high-tech products ranging from consumer electronics to military hardware — tonnes of surface soil and vegetation must be moved to make way for the immense quantities of chemicals needed to extract the elements from the earth.

However, rare earth extraction, despite its economic benefits for locals, has left the people of Ganzhou living with toxic water and contaminated soil. Government efforts to clean up the mining sites have fallen short of solving the area’s deep-rooted environmental problems due to the lack of funding and technology.

Since the 1960s, numerous rare earth deposits have been found in [Ganzhou], creating an industry that has become a major employer and money-maker for local residents.

There are no current figures available for the cost of cleaning up the mines, but in 2012, Su Bo, a vice minister at the Ministry of Industry and Information Technology, estimated that the clean-up cost in Ganzhou alone could run as much as 38 billion RMB (US$5.7 billion).

A history with rare earths

Name aside, rare earth elements are actually not all that rare. One element, cerium, is more common in the Earth’s crust than copper. The challenge is to find places where the rare earths are concentrated enough to make mining them worthwhile. And Ganzhou, is one of those places. There are rare earth mines in every part of Ganzhou, according to a scholar connected to the local natural resources bureau.

Ganzhou, a prefecture-level city located at the southernmost tip of East China’s Jiangxi province, has a decades-long history of rare earth mining. Since the 1960s, numerous rare earth deposits have been found in the city, creating an industry that has become a major employer and money-maker for local residents.

During the golden years of rare earth mining for Ganzhou in the 1980s when prices were skyrocketing, “people in our village bought half of the houses on the street,” said Zhong Jianlin, the secretary of Shangjia village in Ganzhou’s Xunwu county.

He also said that 80% of people in another village bought houses by using the money they earned from their own rare earth mine nearby.

Despite the economic benefits brought about by rare earth mining, most locals still relied on farming as their main source of income, especially after residents were barred from mining on their own around 2000.

Despite the economic benefits brought about by rare earth mining, most locals still relied on farming as their main source of income, especially after residents were barred from mining on their own around 2000. However, the environmental damage from the decades of mining has undermined the area’s agriculture. “Before the 1980s, the place we lived in was a land of fish and rice. Every May and June, when the rainy season arrived, the fish in the river would jump out of the water,” Zhong said.

But after one or two years of mining in the area, he said that rice would still grow but would no longer produce seeds.

Most of the rare earth elements mined in Ganzhou are found in ion-adsorption clays and have to be extracted using chemicals, said Wang Zimeng, a professor at Fudan University.

The process is called leaching, and there are several methods. For example, in-situ leaching, the most popular method in Ganzhou, requires workers to dig several wells at the rare earth mining sites. Workers then inject a chemical solution into the wells, which then spreads through the natural underground cracks in the earth. When the chemical solution comes in contact with a rare earth element, there is a reaction that pulls the element out of the ground. Workers then extract the chemical solution back up to the surface, where it is processed to obtain the rare earth elements, according to Luo Caigui, a lecturer at the School of Resources and Environment at the Jiangxi University of Science and Technology.

Tonnes of chemicals are needed to do all this. It takes seven or eight tonnes of ammonia sulfate to extract one tonne of rare earths, according to Su.

Local authorities have ramped up efforts to clean up the mines but have not been able to solve the problem of deep soil contamination...

The toxic chemical solutions can remain underground for a long time, during which they can pollute the groundwater and the deep soil. At the same time, the process creates large amounts of tailings and tailwater — the waste and wastewater produced by leaching. This waste can flow into nearby rivers and flood farmland, leaving both unfit for growing crops.

“The water in the river cannot be used and the crops cannot survive in the fields,” said a 79-year-old local farmer. “I have to ask my children for money to make ends meet.”

In Longnan, a county-level city in Ganzhou, there is a river where the water appears to be milky white. Li Shengyuan, a local villager, explained that the colour is from a layer of residual rare earths from mining tailwater.

Outside Li’s home, there is a stream that neither he nor his wife will use, even to wash their hands. “After you wash your hands, they will itch,” he said.

Li told Caixin that he and some other villagers spent more than 10,000 RMB about 20 years ago to buy the cement and water pipes needed to pump in clean water from elsewhere.

The central government’s environmental protection inspector criticised local authorities in 2016 and 2018 for their mismanagement in cleaning up abandoned rare earth mines in Ganzhou. Local authorities have ramped up efforts to clean up the mines but have not been able to solve the problem of deep soil contamination, Caixin has learned.

"Regreening mines and planting trees and grass are still relatively simple technical measures, but we cannot improve the water quality without them." — Xu Wei, Deputy Director of the Natural Resources Bureau of Longnan County

Mostly, local officials have tried to turn the city’s abandoned mining sites into industrial parks. In September 2019, the Ministry of Ecological Environment issued a document saying that 450 hectares (1,112 acres) of cleaned-up former mines had been put to use as industry sites in a village in Xunwu county.

Local officials have employed different clean-up methods for different sites, said Xu Wei, deputy director of the natural resources bureau of Longnan. In Xunwu county, authorities have planted cash crops on some former mining sites to help restore the vegetation. They have also built drainage ditches at the foot of the mountains to prevent the wastewater from inundating farmland.

“Regreening mines and planting trees and grass are still relatively simple technical measures, but we cannot improve the water quality without them,” Xu said.

In Xunwu county alone, a total of 955 million RMB has been spent cleaning up the mines, but most of the money came from the central government, project funds and company investments.

All the officials and scholars interviewed by Caixin believe that mine clean-up is a long-term endeavour, but opinions differ about the main obstacles.

For Zeng Weilang, director of the project office at the Xunwu County Development and Reform Commission, funding is the biggest challenge. Cleaning up the abandoned mining areas requires millions of RMB, which the local government cannot afford. In Xunwu county alone, a total of 955 million RMB has been spent cleaning up the mines, but most of the money came from the central government, project funds and company investments.

For Xu, the lack of deep soil remediation technology is the most pressing issue. “Technology comes first. We can’t talk about capital until we have the technology,” he said.

Cleaning up the abandoned rare earth mines in Ganzhou is more difficult than in other places due to the permeability of the ground in the area, said Liu Siwen, an associate researcher at the National Geological Experiment and Testing Center.

“Mine clean-up is a long-term and complex systematic work,” Liu told Caixin. “It is unrealistic to use simplistic methods to solve very complex problems.”

This article was first published by Caixin Global as "In Depth: China’s Rare-Earth Hub Wrestles With a Stubborn Problem — Cleaning Up". Caixin Global is one of the most respected sources for macroeconomic, financial and business news and information about China.

Related: Chinese academic: Will China play the rare earth card against the US? | How to break China's monopoly on rare earths | Will China have enough natural resources to sustain its growth? | China's local governments going bankrupt? | The growing difficulty of balancing China’s local government budgets