China's university admissions conundrum: Who should have priority?

Tian Fangmeng believes that affirmative action for poorer students and the widespread provision of scholarships for overseas students will bring down the standards of top universities in China. Alternative methods can be found to aid students from poorer Chinese regions or raise the international rankings of top universities without compromising the integrity of university admissions. 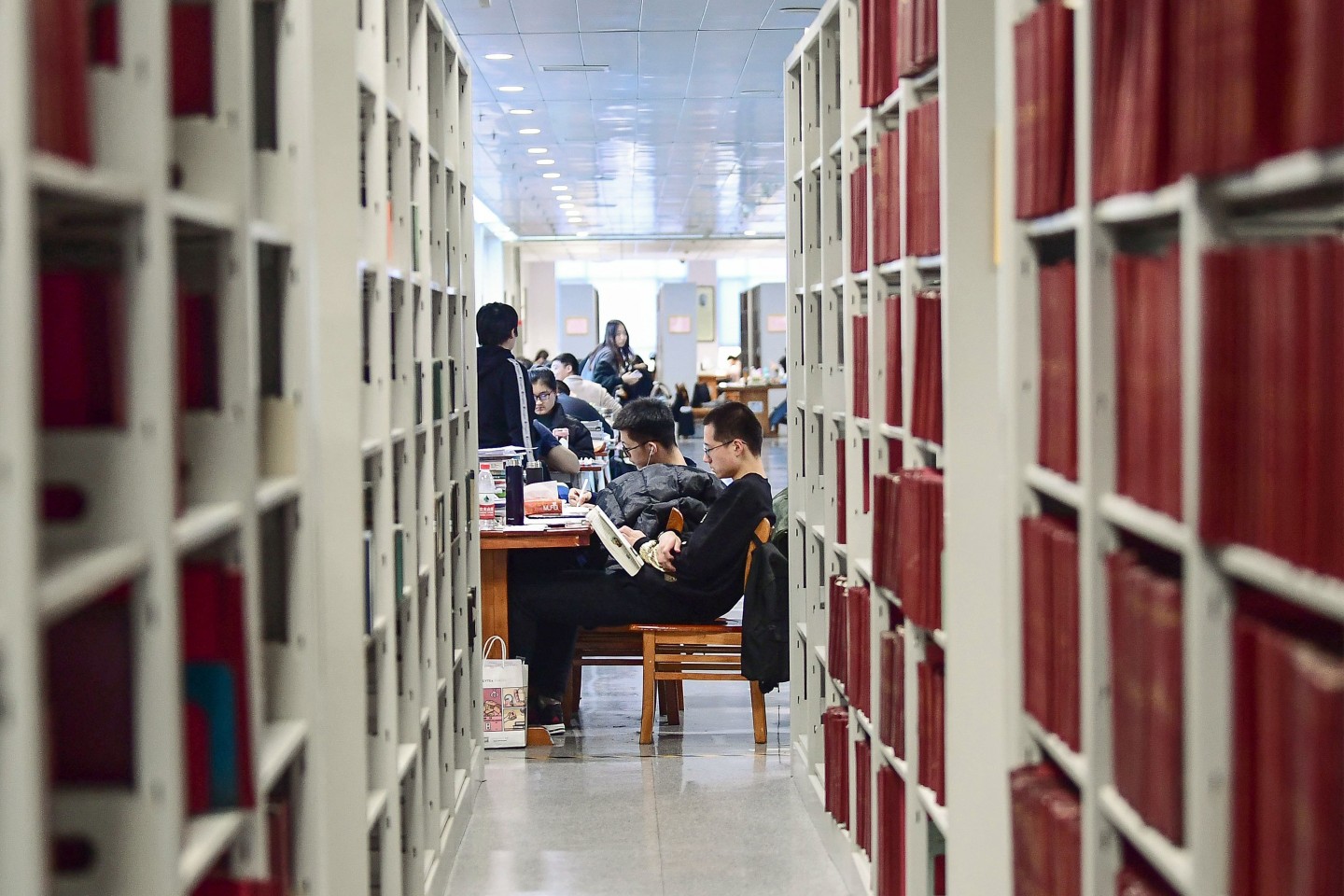 Grace Chong - 30 January 2023
Amid ongoing tensions, a high-level visit by US Secretary of State Antony Blinken to China in the coming week shows hope for improved relations between the two economic powerhouses. Zaobao correspondent Yu Zeyuan notes that while the meeting may not produce practical results, it is a much needed exchange to manage and control China-US relations from worsening.
Read more
Translated by Grace Chong on 5 December 2019

For a big part of Chinese history, examinations have been used to select government officials, with the imperial examinations being the most well-known example. The system was abolished by the Qing government in 1905 because it was no longer in line with the country’s development needs.

During the Republic of China years, Chinese universities such as Peking University held admission examinations for prospective new students. But this practice was discontinued during the Cultural Revolution under the influence of far-left ideology. Recommendations for university places were given to children of blue-collared workers or poor farmers instead.

With China’s reform and opening up, the gaokao (高考) or national college entrance exam was reinstated. At that time, the move was seen as one that brought order to the chaos of the Cultural Revolution years. Today, many years after the implementation of the gaokao system, there is an increasing amount of debate on issues such as educational equity. A number of studies have found that students from more well-off urban households stand a better chance of enrolling in top Chinese universities. On the other hand, the proportion of students from poor rural households in these universities is falling gradually. As a result, the media publishes opinion pieces on social immobility from time to time, and social inequality has become a political issue.

Giving poor students a leg up

Against this backdrop, the Ministry of Education rolled out a special university admissions programme that targets applicants from poorer regions in 2012. It allows students from certain poorer regions to secure a place in top universities even if their gaokao scores do not satisfy the entry requirements.

The programme’s 2016 target was helping 60,000 students from impoverished areas, 10,000 more than in 2015. In 2018, the China News Service reported that some 37,000 students were admitted to top Chinese universities through various special programmes. That is around 10% of the total number of new students who matriculated to the said universities in the same year.

Peking University is one of the best Chinese universities and said to be the Chinese equivalent of Harvard University. Under the above-mentioned special programme, Peking University set aside eight places for students from Henan province this year. The last two places were to be given to two students who scored 542 and 536 points (out of a maximum of 750 points). Citing the possibility that the two lowest-scoring students may not be able to cope academically, admissions officials from Peking University decided to award the places to two other high-scoring students (with an average of 671 points) who picked Peking University as their second choice. This led to a social outcry and the public pressure made the Peking University authorities reverse its decision.

Not long after this, a Peking University offer letter addressed to a foreign student from the Philippines was published online. The student was offered a full scholarship worth over 400,000 RMB to study in Peking University medical school for six years. In addition, she would also be sponsored for a year of Mandarin preparatory classes at Shandong University. The letter drew a barrage of criticism from netizens. Given the shortage of healthcare workers in China, many Chinese citizens were puzzled by the government’s decision to pay for international students who are not proficient in Mandarin to study at Peking University medical school, instead of spending the money on local students.

In fact, the Chinese government has been working on increasing the number of foreign students in the country for nearly a decade. It is doing so to improve the performance of Chinese universities in international university rankings since the proportion of foreign students is one of the evaluation criteria in such rankings.

One of its ambitious goals is to have around 500,000 foreign students studying in the Chinese education system by 2020. Today, China is the top Asian destination for international students in terms of numbers, and joint second globally with the UK. Based on figures published by the Ministry of Education, the number of foreign students studying in China increased from 260,000 in 2010 to 492,000 in 2018. As a result, Chinese university campuses are becoming more cosmopolitan. In some top universities, international students make up around 10% of the student population.

Though their policy goals may differ, China’s special university admissions programme for poor students and its policy to attract more foreign students have similar mechanisms and effects. They are alternative admission pathways set up to help the top universities recruit a target number or proportion of students of certain backgrounds.

In the last few years, I have written several articles in the Chinese media criticising these two Ministry of Education policies for widening the gap between students and having a negative impact on teaching quality. Taking student background into consideration instead of just relying on academic ability also sullies the value of educational equity that has been in place since China’s reform and opening up. It is also somewhat reminiscent of how things were during the Cultural Revolution years. Besides, the quality of international students and poor students may not justify the considerable teaching and financial resources invested by tertiary institutions in them. Additionally, their subpar admission grades also mean that these two groups of students are more likely to be unable to cope with the academic workload, and this could be detrimental to their development.

The school admission scandals of recent years have shaped public impressions that the elites are always able to send their offspring to prestigious schools somehow.

Even though my criticisms were based on similar arguments, the responses could not have been more different. My opinion pieces on foreign students were widely shared on China's domestic social media platforms, viewed several hundred thousand times, and resonated with many educators in tertiary institutions. When the topic of international students was under the media spotlight this past summer, two mainstream media companies in China interviewed me. On the other hand, when my essay opposing the special university admissions programme for students from poor regions was published on a new media platform focusing on opinion pieces, the response from readers was lacklustre, and both viewership and the number of reposts were very low.

As for international students, many Chinese citizens are displeased that the government is spending money on grooming them because they believe that local students are superior to those from developing countries.

Why was there such a stark contrast to the responses? It could be a reflection of public sentiments on the notion of fairness.

After market reforms were implemented, the wealth gap in China widened. While there is a multitude of mechanisms and reasons behind this, there is no denying that some of the rich acquired their wealth through influence peddling, and through collusion between government and business. This explains why the middle and lower classes are constantly pushing for social justice. The school admission scandals of recent years have shaped public impressions that the elites are always able to send their offspring to prestigious schools somehow. Therefore, having a quota in place is the only guarantee that some poor students would receive a high-quality education.

As for international students, many Chinese citizens are displeased that the government is spending money on grooming them because they believe that local students are superior to those from developing countries. Government policies that incentivise foreign students to study in China are not only seen as a waste of public resources, but also breeds a strong sense of unfairness.

While it is normal for a big country like China to have multiple education policy goals, the government also needs to pay attention to the means and methods of realising them. In terms of making tertiary education more cosmopolitan, China should not be too eager to compete with European and American universities in terms of the proportion of foreign students. Instead, the government would do well to focus on developing a group of world-class universities that are attractive to international students.

As for the allocation of resources for education, even though a helping hand should be extended to the weaker members in society, reserving places for them in top universities is not the optimal solution. In lieu of this, the government can help more students from poor households get into top universities by enhancing elementary and middle school education and increasing the monetary value of scholarships.

The American economist, Thomas Sowell, is an admirer of the education system in Singapore. Singapore’s population comprises several ethnic groups, just like that of its neighbour, Malaysia. Ethnicity does not play a part in university admissions in Singapore, whereas Malay students in Malaysia receive preferential treatment when applying to university. Despite this difference, Singaporean Malays perform better than their Malaysian counterparts on average both in school and at work. In this regard, China can borrow from Singapore’s experience and only take into account a student’s gaokao score for admission to university.