Corruption in China seeps into the Buddhist world

Amid the controversy over honouring Japanese war criminals, Xuanzang Temple in Nanjing has found itself in more hot water as its former abbot Chuanzhen was exposed for his connections in the business and official circles. Zaobao correspondent Yang Danxu gives a profile of this senior monk and what his secular activities mean for the temple and for Buddhism. 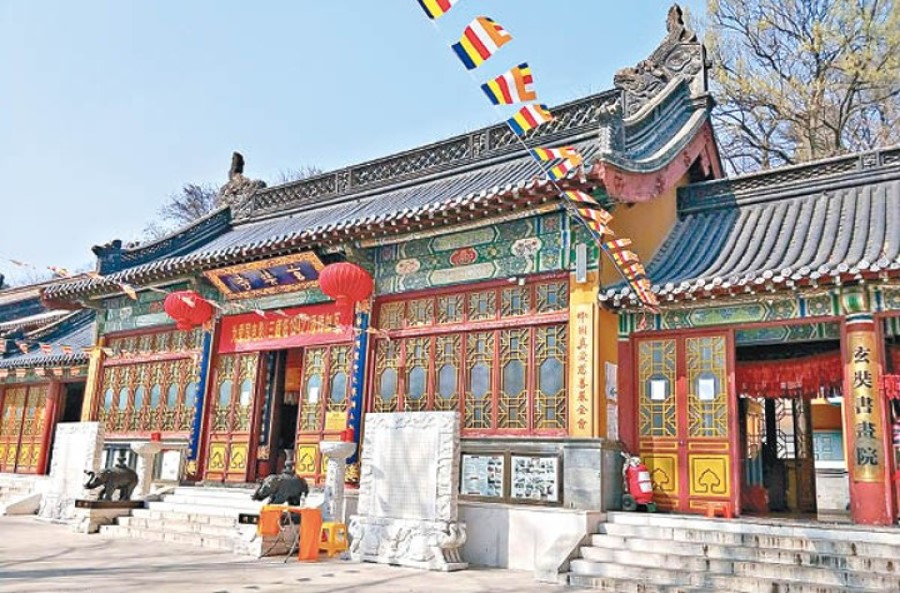 The Xuanzang Temple in Nanjing. (Internet)

News of Japanese war criminals being honoured at Nanjing’s Xuanzang Temple has sparked an online furore in China. The devotee who had put up the memorial tablets has come under scrutiny, but so has Chuanzhen, the temple's abbot.

Nanjing authorities announced on 22 July that relevant religious affairs officials have been published and the abbot has been replaced.

Chuanzhen’s secular name is Li Yijiang. Public information shows that he was born in 1968 in Yingshang county in Anhui, the same birthplace as Shaolin Temple abbot, Yongxin. In the late 1980s, Li became a monk in Qixia Temple in Nanjing and was among the few that had a high school education.

Chuanzhen later read history at Nanjing University, becoming one of the first monks to study in a secular university following China’s reform and opening up. With this accolade, Chuanzhen rose to become an abbot, while also being a member of the Chinese People's Political Consultative Conference for Nanjing, and deputy head of the Nanjing Buddhist Association.

In the clip of the salon’s opening event, he is seen on stage in his robes, saying that he is almost 60 years old and as good-looking as female celebrities because he is a patron of this beauty salon.

Like Yongxin, Chuanzhen has a good head for business. He casts a wide net and is known as a multi-hyphenate monk.

Following the Xuanzang Temple incident, Chinese media dug into Chuanzhen’s business endeavours. He is reportedly linked to six companies dabbling in elder care, tourism, cultural exchange, film production and Buddhist supplies. He was even the screenwriter and producer for patriotic movies such as Qixia Temple 1937 (栖霞寺1937) and Sanzang Pagoda 1942 (三藏塔1942).

A video clip circulating on social media revealed that Chuanzhen is a spokesperson for a beauty salon. In the clip of the salon’s opening event, he is seen on stage in his robes, saying that he is almost 60 years old and as good-looking as female celebrities because he is a patron of this beauty salon. The clip immediately drew a wave of negative reactions.

A celebrity in official circles

Not only is Chuanzhen involved in business, he is also considered a celebrity in Nanjing’s officialdom.

In 2015, Southern Weekly ran an article titled “The Abbot’s Friends in Officialdom” (方丈的官员朋友圈), which revealed Chuanzhen’s relations with Nanjing’s senior cadres, exposing their identities and their corrupted and superstitious lifestyle. The article recently resurfaced, and the public saw how comfortable this senior monk was in the political arena as he showed off his friends in officialdom.

According to the report, Chuanzhen’s reception room is full of photographs of him posing with local officials and central government leaders. He is adept at socialising with officials, and was close to several Nanjing senior cadres who were later removed, including former party secretary Yang Weize and former mayor Ji Jianye.

Chuanzhen reaped the benefits from both the religious and secular world as a Buddhist monk dabbling in business, and also had dubious connections with Chinese officials. This has again sparked public concern over the state of Buddhist temples that are meant to be serene and pristine.

But China’s Buddhist community has been embroiled in controversies in recent years. In 2018, the #MeToo movement against sexual abuse emerged in China, and the abbot of Beijing’s well-known Longquan Temple, former president of the Buddhist Association of China Xuecheng, was accused of brainwashing and sexually assaulting several female disciples.

The whistleblowers also exposed other problems including the illegal expansion of Longquan Temple and the large amounts of temple funds unaccounted for. While officials did not confirm the sexual assault accusations, they verified that Xuecheng had indeed sent obscene messages to female monks and violated Buddhist principles.

Shaolin Temple’s Yongxin was also embroiled in numerous scandals, including soliciting prostitutes, keeping a mistress who was a Peking University student, and having an illegitimate daughter. But nothing much was done about these rumours.

Apart from moral issues, the commercialisation of Buddhist temples has long been an open secret in China’s Buddhist community. For example, Shaolin Temple engaging in property speculation, the sacred Buddhist mountain of Putuo attempting an IPO and abbots turning into CEOs and monks livestreaming. Apart from selling entrance tickets and incense, monks are also involved in various businesses.

It is no wonder some people say that the sacred realm of Buddhism has been turned into a money-making business. Monks or pinseng (lit. poor monk, 贫僧, a humble self-address of a monk) are no longer pin, or poor.

As religion needs power to thrive in China, ill-intentioned monks are happy to mingle with officials, and many temples welcome cooperation with local governments as well.

The commercialisation of Chinese temples is not only due to survival needs; the secularisation and utilitarianism of Buddhism in China also plays a big part. While a lack of discipline could possibly explain some temples’ weakness for commercial and monetary gains, and even their depressing moral standards and unreserved corruption, these activities are also driven by the market economy to some extent, and incited by hedonism and materialism of the entire society. The power of capital knows no bounds — Buddhist temples are not the only ones held hostage.

Under China’s unique system, religion is subordinate to power. As religion needs power to thrive in China, ill-intentioned monks are happy to mingle with officials, and many temples welcome cooperation with local governments as well.

As the Chinese saying goes, “religion is building a stage to sing an economic opera” (宗教搭台、经济唱戏) — revenue for local governments is generated through cultural and tourism services and religious activities. This explains why monks have such close relations with officials and why Chuanzhen is friends with numerous prestigious officials and dignitaries.

If monks are busy managing their businesses and engaging with officialdom, can they be without vanity and attain a state where everything is emptiness, (六根清净、四大皆空) as they preach?

Related: China's crackdown on pretty boys and temple temptresses: Why are Chinese women feeling targeted? | Kris Wu’s downfall and the dark side of big capital | Celebrities scrubbed from the Chinese internet: Victims of China’s social revolution? | The ugly scenes behind China's talent shows