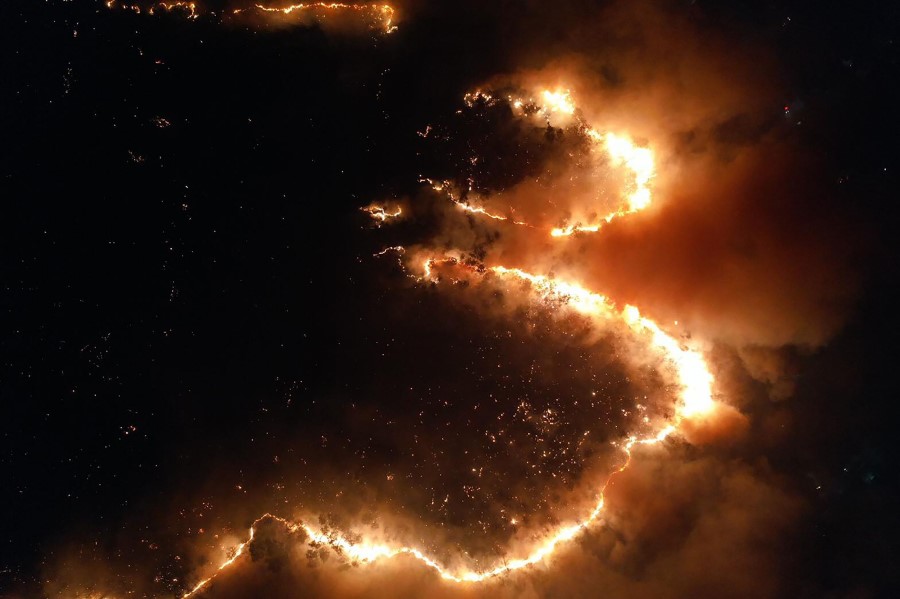 Candice Chan - 20 June 2022
The Fujian, China’s third aircraft carrier, was launched on 17 June. The highlight is the electromagnetic catapult system for launching aircraft, which could put it on par with much of the US’s cutting-edge technology in the field. Zaobao correspondent Yu Zeyuan takes a closer look at the implications of this development.
Read more
Translated by Candice Chan on 3 June 2020

Since mid-March this year, the forest fires caused by the large-scale agricultural burning and droughts in the countries along the Mekong River have caused transboundary haze. As the number of hotspots rose, a haze alert was declared in the Lancang-Mekong area.

According to statistics, between March and May, many cities in countries along the Mekong had an average of 15 days each month where the air quality index (AQI) was above 150. On 26 May, Ho Chi Minh City in Vietnam and Chiangmai in Thailand were among the top ten worst polluted cities in the world, with air quality in the unhealthy range.

As the hotspots are concentrated in the borders between Thailand, Myanmar, and Laos, the fire and smoke is having the biggest impact on the air quality of Yunnan and Guangxi in China, as it spreads northward and eastward. Cities in Guangdong, Hainan, and Guizhou are also experiencing mild to moderate pollution.

As of May this year, Thailand’s economic loss due to the forest fires is about 10 billion baht...

In particular, Yunnan has been seeing dry weather with little rain over the past few months, leading to poor air circulation. Concentrated hotspots outside China⁠, along its borders with Myanmar and Laos, have also resulted in numerous small mountainous fires in Xishuangbanna, Honghe, and Lincang. Emissions from enterprises resuming operations and production post-Covid-19, and forest fires within the province, have led to an AQI of over 200 with a predominance of PM2.5 pollutants for Xishuangbanna for days, making it the city with the second-worst air quality in China.

To combat transboundary haze from drought and agricultural burning for spring planting, ASEAN officials from Laos, Myanmar, Thailand, and Cambodia met early this year to make plans against fires and haze. People were asked to safeguard water resources before the rainy season, to minimise outdoor activities, and to wear masks. However, these measures have not worked.

On 28 April, the ASEAN Specialised Meteorological Centre (ASMC) released the quarterly regional forecast which said that while the approaching rainy season will help to ease fires in the Mekong area, forest fires and haze may continue into June because of higher average daily temperatures and chances of drought this year compared to previous years.

As of May this year, Thailand’s economic loss due to the forest fires is about 10 billion baht, with the hardest hit sector being the service industry of Northern Thailand, which makes up the highest percentage (about 54%) of its economic structure in this area.

After being hit by the transboundary haze, China has activated its anti-pollution emergency plan, fine-tuned its forest fire prevention plans, and continued to build buffer zones against forest fires along its borders. It is also carrying out strict checks and controls on urban air pollution, and increasing water spraying frequency for dust control. However, not only is such long-term sustained efforts rather costly, but because China is not the source of the haze, hence its unilateral efforts have not been effective.

The haze is mostly caused by the following factors. First, the Lancang-Mekong area is high in the north and low in the south, crossed with hills and rivers. Its vertical geography lends itself to a buildup of haze. Also, due to seasonal winds and El Nino, the dry season for countries in the Lancang-Mekong region is long, which makes it easier for the haze to affect China.

...the government organisations in some of these countries are complex, with poor rule of law leading to inefficiency in establishing environmental standards and communicating and implementing policies...

Second, these countries have homogenous economies that have retained old production frameworks and models. Burning land costs nothing, while the burned vegetation becomes natural fertiliser for crops. This adds to the number of man-made fires.

Third, these countries are generally less developed, with rapidly growing populations but low education levels and weak knowledge of fire and electrical safety, as well as a lack of trained firefighters.

Fourth, the government organisations in some of these countries are complex, with poor rule of law leading to inefficiency in establishing environmental standards and communicating and implementing policies, which has got in the way of cooperation in managing the haze.

Steps that can be taken

To effectively curb transboundary haze, the governments of countries in the Lancang-Mekong region have to immediately step up on communication and cooperation, and together implement scientific and rational measures to control the number of hotspots. Countries such as Laos, Myanmar, and Thailand can ramp up controls on agricultural burning and forest fires, so as to limit the number of hotspots and scale of burning to a smaller area promptly and effectively.

Next, a cooperative framework involving Lancang-Mekong regional countries should be set up to tackle transboundary haze. China can work with its neighbours such as Laos, Myanmar, and Vietnam to come up with a long-term mutual assistance system. These countries should work to improve professional training for firefighters, share weather data and disaster prevention tactics through various media platforms, and improve the dissemination of fire and disaster prevention information among the population.

Countries should also enhance their disaster prevention measures and reporting systems. Specialised funds are available through cooperation initiatives such as Lancang-Mekong Cooperation (LMC) Special Fund, the Lancang-Mekong Environmental Cooperation Strategy, and the Green Lancang-Mekong Initiative. Countries can tap on these resources to build an air quality monitoring system and upgrade their crisis response infrastructure. Technical training centres and youth exchange and cooperation centres should also be set up to provide education for technical personnel in areas such as farming, firefighting, and public health.

Finally, transboundary haze management and cooperation among Lancang-Mekong regional countries should be formally included in the ASEAN-China Strategy on Environmental Cooperation. This is the final year of implementation for the ASEAN-China Strategy on Environmental Cooperation and of the commitment to eliminate haze under the ASEAN Agreement on Transboundary Haze Pollution.

Countries can continue to refine bilateral cooperation in fire, haze, and disaster prevention through the ASEAN Plus Three Environment Ministers Meeting, China-ASEAN Environmental Cooperation Forum, and the China-ASEAN Green Ambassador Plan, and establish a joint prevention framework against forest fires and haze in border regions.

Related: The Mekong River’s future and the role of China | The world has become greener because of Covid-19, but will it last? | China-led Mekong project terminated as Thais protest: Participatory diplomacy in action?