Future world: A rising Asia and a polarised global economy

Commentator Chen Kuohsiang notes that the US’s efforts to counter China is the main driving force behind the redrawing of the global economic map. However, as the US is the sole beneficiary while most of the other countries have supported the US’s cause to their own detriment, conflicts of interests will gradually emerge. In the end, the global economy may polarise into various camps with disjointed supply chains. 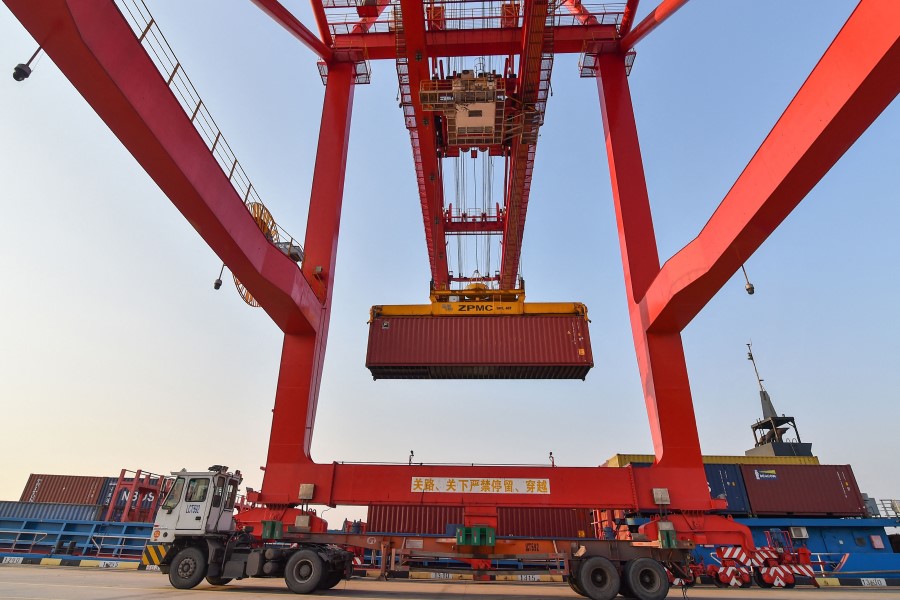 This photo taken on 3 January 2023 shows a crane loading a container at Nanjing port in China's eastern Jiangsu province. (AFP)

Last year, the world was in turmoil as the global economy was hit by both inflation and an economic downturn. These negative factors will either continue or ease up this year, but the dynamic economic ties between countries will be increasingly impacted by the issues of national sovereignty, while regional integrated economic development will gain momentum. As a result, the global economic map will change dramatically, and need to be redrawn.

US the main driver and beneficiary

The US, whose core idea is to counter China, is the main driver behind this redrawing of the global economic map. However, as the US is the sole beneficiary while most of the other countries have supported the US’s cause to their own detriment, conflicts of interest will emerge. The major European countries, Japan and South Korea have suffered the most.

But there will be no ultimate victor...

In particular, as a result of US President Joe Biden’s Inflation Reduction Act, the relevant countries have endured significant losses. For example, by cooperating with the US chip ban against China, manufacturers of semiconductor manufacturing equipment in the Netherlands, Japan and South Korea have lost substantial business, which they are unable to recoup.

While the Russia-Ukraine War, which has severely affected European politics and economies, may have temporarily preserved EU solidarity, most economies have continued to decline. As economic revitalisation becomes a top priority, transatlantic struggles have begun due to divergent priorities.

As the strongest advocate of globalisation for the past four decades, the US, in its bid to counter China, has now become the vanguard for deglobalisation. Its efforts appear on the surface to have garnered much support but have actually crumbled. Increasingly, the opponents of the US have banded together while its alliances have gradually fallen apart, creating a tripolar confrontation.

But there will be no ultimate victor, as protectionism, emerging again as one of the most powerful forces altering the global economy, can only result in the shrinkage of the economy and trade.

... the US marginalises what is beyond its control and turns towards bilateral and regional economic mechanisms to restructure trade.

State interventions have resulted in the reorganisation of the global supply chain. The US has initiated the China-US trade war to curb China’s trade and economic relations as well as to counter China’s technological developments. Subsequently, the Covid-19 pandemic and the Russia-Ukraine War have drastically affected the global supply chain. With the re-industrialisation of the US and its series of measures to limit China’s rise, their economies have gradually decoupled, which has become increasingly difficult to reverse.

The Biden administration is adept at covering its real objectives with sweet talks, cajoling trade partners to fulfil its interests on the pretext of restricting Russia and China, cutting import tariffs and other barriers against US goods. The Biden administration has also made unrealistic promises in bilateral and regional free trade agreements (FTAs), engaged in intensive free trade negotiations with many countries, and jointly launched the Indo-Pacific Economic Framework for Prosperity (IPEF) with numerous Indo-Pacific countries.

Through these, the US marginalises what is beyond its control and turns towards bilateral and regional economic mechanisms to restructure trade. Although the US’s exploitation of unilateral actions has yielded only limited substantive results, its ability to disrupt the status quo cannot be underestimated. Meanwhile, non US-led FTAs are gradually gaining momentum to enable the integration and development of regional economies, including China which is the largest.

Evidently, the US is targeting China. Both China and the US recognise the imbalanced bilateral trade but they have very different views on the issue and how to address it.

China is inclined to believe that bilateral trade is mutually beneficial and that the huge trade deficit does not mean that the US has not benefited, the least of which is maintaining long-term stable prices through the import of large quantities of inexpensive and high-quality Chinese goods to the US market.

China is forced into self-reliance through strengthening its domestic economy.

The US insists that the trade deficit is unfair and demands that China imports more US goods and services as well as adhere to the principles of balance, reciprocity and fair competition. China’s resistance to the US’s unilateral demands prove ineffective, and its reluctant efforts to deal with the demands are regarded as insincere and perfunctory. In reality, bilateral trade has continued to deteriorate.

As the US keeps up its pressures on China, their bilateral trade and economic relations are headed towards disengagement. China-US trade has sharply reduced in the past few months, and China is forced into self-reliance through strengthening its domestic economy.

Globalisation, the widely accepted norm, and the conventional concepts of competitive advantage and efficiency in global trade and investments, have now been superseded by considerations of security, risks and uncertainties.

These new bottom lines are now deeply entrenched in restructuring the global supply chain and the rules of transnational economic governance. Maintaining a distance in China-US trade and supply chain due to security considerations has become the dominant mentality that will exacerbate economic decoupling.

In a time of global economic changes and turbulence, can the US emerge as the victor in its competition with China? The economic significance of finance and technology, the two pillars on which the US economic hegemony relies, is less than what it was.

As it will soon be the Asian era, the strategic focus of all countries is to compete in Asia for the Indo-Pacific market.

Asian countries have become more important globally. If the global economy was divided into three zones, namely Indo-Pacific, the US and Europe, the US’s share of global GDP has decreased, Europe’s share has sharply reduced, and China’s share has exceeded that of the entire eurozone for the first time two years ago.

The accelerated decline of Europe is a foregone conclusion, and it is a matter of time before the rapid emergence of China and India in the Indo-Pacific will replace the dominant US. As it will soon be the Asian era, the strategic focus of all countries is to compete in Asia for the Indo-Pacific market.

Critical to this is China’s economic emergence, estimated to generate more than 85% of the US’s GDP within the next three years, which will change the entire world and alter the currently asymmetric China-US competition. China and the US will then grapple with each other at the same level. The essence of this competition and the two nations' strategic positioning will change accordingly, and various discords will continuously intensify.

With China’s rapid emergence and the US’s intimidation, it is inevitable that the global economy polarises into various camps and supply chain becomes disjointed.

China has gained a central position in the global supply chain, squeezing into the top three in the world, with its technological prowess playing a major role in cushioning the way. China’s patent filings top the world, surpassing that of the US for the first time three years ago, and its research citations, R&D intensity and innovation index rank among the best globally. However, due to the US’s deliberate efforts, China’s share of international co-inventions and international scientific co-publishing have declined. The challenges ahead can only be more severe.

With China’s rapid emergence and the US’s intimidation, it is inevitable that the global economy polarises into various camps and supply chain becomes disjointed. The emerging industries in developing countries are on an irreversible course to gradually challenge those in advanced countries. In this process, regional cooperation is also a dividing force that can bring about global polarisation. In line with actual developments, the rapidly transforming global economic map must be constantly redrawn.

Related: Chinese netizens debate: Should China abandon the market economy for a ‘people-oriented’ economy? | Dual circulation strategy revisited: China deepens integration with the global economy | Ten years of political intervention: China’s economy at a crossroads | China set to overtake US economy sooner than expected, but it is worried