At the Boao Forum, Chinese President Xi Jinping put forth the Global Security Initiative which has the concept of “indivisible security” at its core. Is this China’s answer to breaking up “small cliques” in international relations and seeking to build a community of common destiny for mankind? 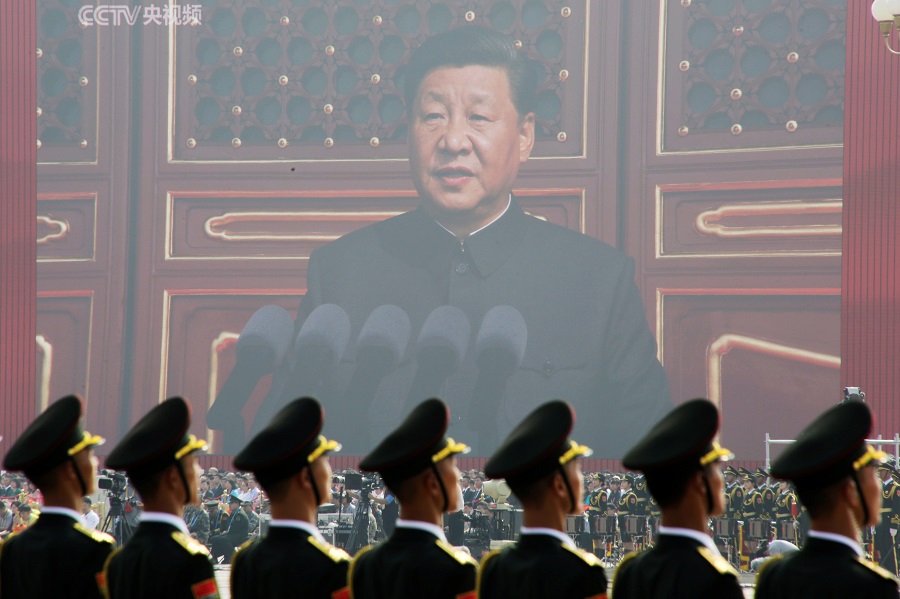 Soldiers of People's Liberation Army (PLA) are seen before a giant screen as Chinese President Xi Jinping speaks at the military parade marking the 70th founding anniversary of People's Republic of China, on its National Day in Beijing, China, 1 October 2019. (Jason Lee/File Photo/Reuters)

Grace Chong - 2 August 2022
Taiwanese commentator Chen Kuohsiang believes that China’s economy is under threat, with the unravelling of intertwining issues in the financial industry, property sector and government finances that cannot be easily resolved. How will China boost its investment-led economy, push down unemployment rates, and regain consumer and investor confidence?
Read more
Translated by Grace Chong on 27 May 2022

Security dilemma in international relations is a situation in which actions taken by a state to boost its own security cause concerns and reactions from other states, which in turn lead to a decrease rather than an increase in the original state’s security. This action-reaction cycle will result in a sense of less security for all. Security dilemma has been a major source of conflict between states.

The term “security dilemma” was coined by the German-American political scientist John Herz in 1950, in an article titled “Idealist Internationalism and the Security Dilemma”, published in World Politics, a top international relations journal.

Although the concept fit particularly well the strategic competition and arms race between the US and the Soviet Union at the time, it has been widely accepted by realist international relations scholars to explain inter-state conflict.

Since Russia’s invasion of Ukraine on 24 February 2022, Western governments and media have described the conflict as that between democracy and autocracy.

However, as George Kennan, Henry Kissinger, John Mearsheimer and many other strategists and scholars have pointed out, Washington’s dismissal of Russia’s concerns about NATO’s eastward expansion after the Cold War is a recipe for disaster.

Indeed, one of the reasons Russia launched the war against Ukraine was to prevent Ukraine from joining NATO, which would enhance Ukraine’s security but pose a threat to Russia. It is a classic case of security dilemma at work.

Examples of security dilemmas abound both in history and the contemporary era.

Some scholars believe that World War I was caused by a security dilemma as European states felt forced to go to war because of increasing insecurity, despite no one actually wanting the war.

Tensions on the Korean peninsula, along the India-China border, and between Israel and its neighbours today can also be analysed from the security dilemma perspective.

But the more they attempt to augment their security by beefed-up alliances and military build-up, the more China feels encircled.

Security dilemma in the Indo-Pacific region

Growing competition between China and the US can be viewed as a security dilemma too. China’s rising power as a result of its economic and military strength has enhanced its influence and security in relation to its smaller neighbours as well as the US.

China’s neighbours and the US see their security in jeopardy and therefore feel forced to react. But the more they attempt to augment their security by beefed-up alliances and military build-up, the more China feels encircled. This security dilemma helps understand growing tensions in the East China Sea, the South China Sea and the Taiwan Strait.

Realists tend to view the world from a zero-sum perspective and are pessimistic about whether states can overcome the security dilemma. Liberal international relations scholars emphasise the importance of cooperation, through which states may build trust and step out of the security dilemma.

In a world still dominated by great power competition despite interdependence, the security dilemma continues to hamper global efforts to promote peace and prosperity.

The US has been a strong proponent of regional security through its alliance system and its Indo-Pacific strategy in Asia. It has formed multilateral security groups such as AUKUS and the Quad. However, such groups are not inclusive and are undoubtedly aimed at China. As a result, they contribute to the security dilemma in the region.

President Joe Biden’s May 2022 visit to South Korea and Japan, particularly his controversial and confusing comments on defending Taiwan, has exacerbated such security challenges.

In the Taiwan Strait, Washington’s continued arming of Taiwan and China’s active air and naval manoeuvres around Taiwan could create a real dangerous security dilemma, which could instigate and accelerate a military conflict between China and the US.

... this is the first time that China has argued for indivisible security outside the context of the Russia-Ukraine crisis, with implications for future US actions in Taiwan or the South China Sea.

The concept of a Global Security Initiative (GSI) was unveiled by Chinese leader Xi Jinping when he delivered a video keynote speech at the opening ceremony of the Boao Forum for Asia’s annual conference on 21 April 2022.

It proposes that the legitimate security concerns of all countries should be taken seriously and no country's security should be built at the expense of others’ security. “[We should] uphold the principle of indivisibility of security, build a balanced, effective and sustainable security architecture, and oppose the pursuit of one’s own security at the cost of others’ security,” said Xi.

As the Russia-Ukraine conflict drags on and its spillover effects loom large, the GSI with a vision of upholding “common, comprehensive, cooperative and sustainable security” seems to offer a viable solution to the world's security dilemmas.

'Indivisible security' and its implications

“Indivisible security” is at the core of the GSI. It has been repeatedly invoked by Russia regarding NATO. However, this is the first time that China has argued for indivisible security outside the context of the Russia-Ukraine crisis, with implications for future US actions in Taiwan or the South China Sea.

The GSI was proposed at a time when mankind faces the Covid pandemic, rising tensions over Ukraine and various traditional and non-traditional security threats. The initiative responds to the common pursuit of multilateralism and global solidarity.

According to Chinese Foreign Minister Wang Yi, at the moment, divisiveness is being fuelled by some countries that cling to a Cold War mentality and that are keen to engage in exclusive “small cliques” that practice unilateralism in the name of multilateralism and hegemony in the name of democracy.  “The initiative contributes Chinese wisdom to make up for the present peace deficit,” said Wang.

The GSI has not been well received by the US so far. Shrugging off Xi’s new security concept, US Department of State spokesperson Ned Price claimed that China continued to “parrot” some of Russia's security ideas. However, some analysts in Asia and Europe seem to endorse this new concept.

Others point out that China may be vulnerable to charges of violating the indivisible security principle itself, as some have claimed that China’s behaviour in the South China Sea and along the Sino-Indian border may have violated the sovereignty and territorial integrity of its neighbours.

Nevertheless, the GSI is worth exploring as a way to move beyond the global security dilemma. Western governments and analysts should not have the knee-jerk reaction and oppose this initiative simply because it was proposed by China or Russia.

There can be no genuine security if only part of the world, such as NATO or the US, feels secure while others, such as Russia or China, feels threatened.

The current international system was formed following World War II, with the United Nations (UN) at the centre. Eradicating conflicts across the globe is the pivotal duty of the UN.

The GSI is consistent with the UN mission of maintaining “international peace and security” enshrined in the UN Charter. It is also consistent with Chinese policy of promoting global development and security by forming a community of common destiny for mankind.

Regional security platforms, especially those that are only open to the so-called “like-minded” states such NATO, the Quad, and AUKUS, run counter to the UN mission and the wishes of the global community.

The US Indo-Pacific strategy as a whole is also problematic since it is exclusive of China and aimed at countering China’s influence and dividing the region.

There can be no genuine security if only part of the world, such as NATO or the US, feels secure while others, such as Russia or China, feels threatened. Opposing security blocs are not welcomed by Asian countries.

Unfortunately, the GSI may face difficulty in implementation if the world’s two largest powers — the US and China — are locked in a new Cold War and are unwilling to work together.

The Covid-19 pandemic has taught us that there can be no global security if the international community does not work together as a team.

Global security goes beyond the traditional physical safety of states; it also encompasses global health, food, energy, environment, and other aspects of human security. Global security is the prerequisite for human development.

As the international community continues to combat pressing global challenges, a new concept for promoting global security over group security warrants policy attention. Unfortunately, the GSI may face difficulty in implementation if the world’s two largest powers — the US and China — are locked in a new Cold War and are unwilling to work together.

Related: Why the Global Security Initiative is important for Asia-Pacific security | AUKUS and Quad do not solve India's regional security problems | With AUKUS in place, now what for key players in the Indo-Pacific? | The US has AUKUS. Where are China's alliances? | Containing China: Will the Quad become an Asian mini-NATO? | Quad: Containing China should not be the raison d’être for any grouping