Henan rural banks scam: It's about public trust in the government

Rural bank depositors have clashed with police after finding themselves unable to withdraw their funds, prompting financial regulators to step in and repay customers on behalf of the banks first. If this exercise is not handled delicately, will trust between the people and government be affected? Zaobao correspondent Yang Danxu speaks to bank customers and academics to find out more. 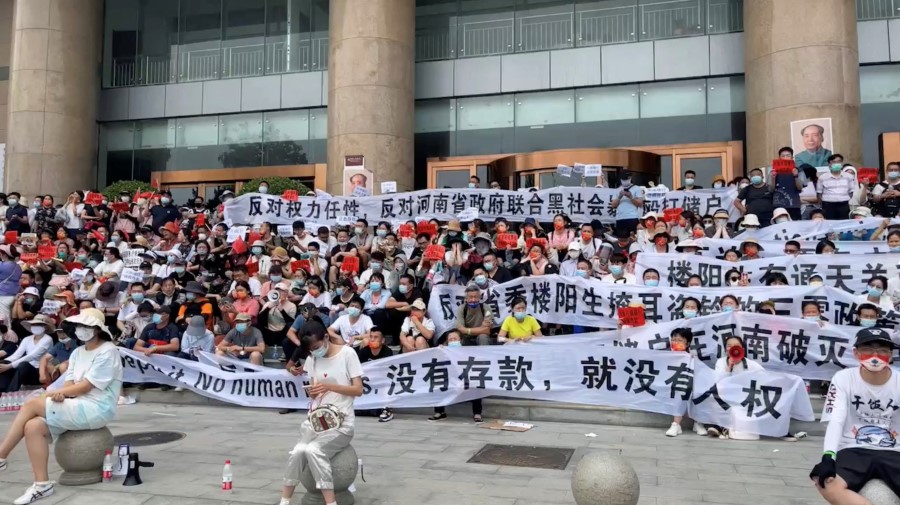 Demonstrators hold banners during a protest over the freezing of deposits by rural-based banks, outside a People's Bank of China building in Zhengzhou, Henan province, China, 10 July 2022, in this screengrab taken from a video obtained by Reuters. (Reuters)

Candice Chan - 5 August 2022
China's "Foundation Plan" for iron ore has gained much official support, and is aimed at reducing reliance on foreign sources of iron, including Africa and Australia. The only way to do this effectively is for China to ramp up mining of its own iron resources. However, these resources are scattered and difficult to access, and of lower grade. This means China has its work cut out if it is to succeed.
Read more
Translated by Candice Chan on 12 July 2022

Following clashes between police and rural bank depositors in Henan’s capital, Zhengzhou, local financial regulators announced on 11 July that they will reimburse depositors in batches. There is concern in China that if the incident is not handled properly, public trust in government agencies will be impacted.

Online video and photo footage show a crowd of depositors gathering on 10 July outside the Zhengzhou branch of the People’s Bank of China, holding banners with slogans such as “Against wilful abuse of power” and “No savings, no human rights”.

Local police sent large forces to the scene, with some people dressed in white forming a human wall against the protestors.

The situation turned physical at one point, with the persons in white dragging the protestors away in chaotic scenes. Zaobao understands that some protestors were bussed to locations such as school campuses and given stern lectures.

In mid-April this year, there were incidents of customers being unable to withdraw their funds from Yuzhou Xinminsheng Rural Bank, Zhecheng Huanghuai Rural Bank, Shangcai Huimin County Bank, and New Oriental County Bank of Kaifeng. Protestors said hundreds of thousands of depositors have been affected, involving as much as 30 billion RMB (US$4.46 billion).

Last month, some depositors went to Zhengzhou to seek an explanation, but found that their health code had turned red and their movements were limited. Their plight drew public attention. Five Zhengzhou officials were later punished, including a deputy director in the Political and Legal Committee of the Zhengzhou Municipal Party Committee.

Following the protest on 10 July, the Xuchang police put out a statement saying that public security agencies had arrested some suspects and that some funds and assets had been seized and frozen in accordance with the law; cases were also being systematically investigated.

According to the notification, a criminal gang led by suspect Lü Yi has been using the Henan Xincaifu Group to effectively control several rural banks in Yuzhou, using third-party online financial platforms to attract deposits and sell financial products, and illegally transferring funds through false loans.

The Henan Office of the China Banking and Insurance Regulatory Commission and the Henan local financial regulatory commission announced on 11 July that starting 15 July, principal sum repayments would be made to off-book customers, starting with individual customers with deposits of up to 50,000 RMB in one institution. Repayment arrangements for those with amounts above 50,000 RMB would be announced later.

Last month, after some depositors’ health code turned red, depositor Mr Liu suddenly found that he was unable to withdraw the 50,000 RMB he had deposited over a year ago at a rural bank. He told Zaobao: “To many people, 50,000 RMB is not much, but it is six months’ worth of wages.”

Noting the health code situation and the fact that depositors were driven away by the police, Liu soon lost faith in the authorities. He said, “It has been three months, and many people are suffering… it seems (the government) does not intend to help us, but is doing all they can to block legal recourse.”

Another customer who declined to be named told Zaobao that in 2020, he deposited 150,000 RMB with the Zhecheng Huanghuai Rural Bank through a third-party platform.

It was only in May this year, when he saw Chinese online media reports of problems withdrawing funds from Henan rural banks, that he realised he was a victim.

Over the past month, he has left messages on the websites of the State Council and the National Public Complaints and Proposals Administration. “Now it looks like all we can do is wait. There is no other way.”

... if the incident is not handled properly, it will hurt the legal rights of hundreds of thousands of depositors, affect social stability, and even impact the trust between the people and government agencies.

Professor Ren Jianming of the School of Public Policy and Management at Beihang University said that the red health code and stability measures merely scratched the surface and did not get to the root of the problem.

He said: “If the depositors’ losses cannot be recovered, they will definitely exert their rights through various means.”

WeChat public account “Uncle Ming Speaks” (明叔杂谈) posted a piece on 11 July noting that if the incident is not handled properly, it will hurt the legal rights of hundreds of thousands of depositors, affect social stability, and even impact the trust between the people and government agencies.

Related: Governing modern Chinese villages is a big challenge | An apple tree in Shaanxi tells a story: China’s quest to eradicate rural poverty | China’s demographic crisis: The farmers should have a say | Persistent poverty and a weak middle class: China's fundamental challenge | It is debatable whether China has truly alleviated poverty