Hong Kong and its uncertain future has become a political metaphor for China-US relations and the future of the world order, says Zheng Weibin. If the passage of the national security law portends that “one country, two systems” is not viable in practice, what else is there left except for an all-out duel between socialism and capitalism? 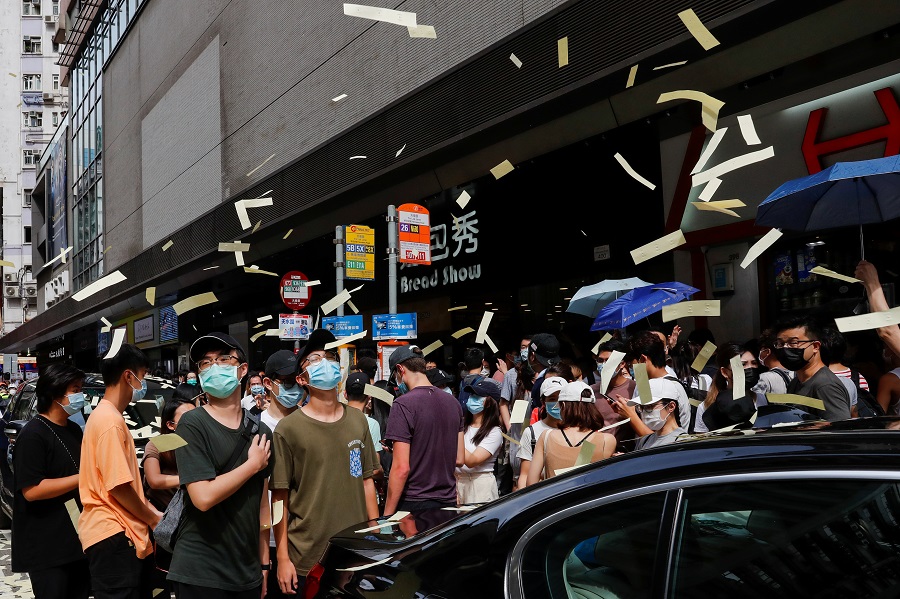 Grace Chong - 29 September 2022
China's central bank is scrambling to increase demand for borrowing by using nearly every instrument in its toolbox. But the impact has so far been limited, as Chinese companies and households are trapped in a crisis of confidence in the economy amid slowing growth and the impact of strict anti-Covid measures. What more can China do to save the economy?
Read more
Translated by Grace Chong on 6 July 2020

All eyes are on the national security law for Hong Kong which was passed on 30 June 2020. Some even see it as the ground zero of a China-US Cold War.

From a sovereignty perspective, Hong Kong is just a Chinese city. Yet, its status is different from any other city in China, as seen from its “one country, two systems” principle, capitalist society, and position as a place where East meets West.

The way we view Hong Kong also shows how we view the future of China-US relations and the future world order. Hong Kong has effectively become a city full of political metaphors.

As mentioned, some people see Hong Kong as the ground zero of a China-US Cold War. It has become something symbolic, in the same way that the Korean War from 70 years ago proved significant for the Cold War in Asia.

Hong Kong’s capitalism has ultimately been devoured by socialism.

While the Korean peninsula remains unstable until today, just as regions outside of Hong Kong — like the Taiwan Strait and the South China Sea — are turbulent, their potential impacts are not as huge as Hong Kong’s. This is not to say that the events happening in these areas are unimportant. It is just that Hong Kong’s political metaphors could indeed point to a new Cold War.

If we look at Hong Kong with its “one country, two systems” approach, and the changes that have taken place over the years through a Cold War lens, particularly since the anti-extradition bill protests started last year, we can see that the passage of the national security law signifies that capitalist days in Hong Kong are over.

What does this imply? This implies that “one country, two systems” is unable to truly take root in Hong Kong. Just as interpreted and believed by some media, Hong Kong’s capitalism has ultimately been devoured by socialism.

This is an extremely dangerous prospect and a shadow that casts a pall over East Asia. It is not only a prediction that could be realised but a sign that people’s understanding of the interactions between China and other capitalist countries have been narrowly distilled into the tussle and conflict between two ideologies.

Removing the grey, leaving only black and white

Since capitalist Hong Kong has vanished, all that remains in the future is clearly the contest between socialism and capitalism. Since Hong Kong cannot exist autonomously under China, a fundamental clash and irreconcilability between two different systems, values, mindsets, and ideologies is implied.

This border of the past Cold War is becoming uneasy again. This is the shadow that East Asia lives under, and central to its discussion is the US’s role in Asia.

This would then remind people of the 1990s again. In 1991, the dissolution of the Soviet Union was seen as capitalism’s victory over communism. If communism were to rise again, another contest between both systems would become inevitable once more.

The Cold War in East Asia had once extended along the Military Demarcation Line of the Korean peninsula and passed through Taiwan, Hong Kong, the South China Sea, and so on. This border of the past Cold War is becoming uneasy again. This is the shadow that East Asia lives under, and central to its discussion is the US’s role in Asia.

East Asia is a home for East Asian countries. It is not just the battleground of major powers China and the US, even though these are important forces that influence and determine its future development. As such, if we view the presence and influence of the US in East Asia as the determining factor in the final analysis of the region, then we would be inviting unnecessary conflict between China and the US, and triggering needless crises.

Although China and the US fought each other in the Korean War 70 years ago, their relative strengths were unequal then. When the war finally ended, China-US relations became relatively distant. However, the relative strengths of both countries are different now — should both countries go head-to-head again, the consequences would be unpredictable.

Moreover, 70 years ago, then US President Harry S. Truman had a red line in his mind about expanding the Korean War. Incumbent US President Donald Trump is clearly not as rational as Truman.

The US goes on the offensive in East Asia

The failure of the US’s China policy over the past 40 years has drawn huge backlash from American society. Conservative hawks play an important role in the US’s decision-making process and are now keeping a close watch on China's expansionist tactics in the world.

Although Trump considers the “America First” policy most important, this position clearly includes the maintenance of America’s absolute supremacy.

Although the US is withdrawing from many parts of the world — such as Europe and the Middle East — it cannot withdraw from East Asia as it has become paramount to tackle strategic threats from China. It is thus more realistic and practical to employ offensive strategies instead.

Although Trump considers the “America First” policy most important, this position clearly includes the maintenance of America’s absolute supremacy. The US’s withdrawal from Europe does not affect its global leadership role or the values and ideologies that it advocates. However, withdrawal from East Asia would trigger huge anxiety and underlying concerns that could even be seen as the failure of the US in Asia.

In recent years, it has become increasingly clear that the US is making a return to Asia.

This would be too huge a blow to the US, as well as to East Asia. However, it would likely be a real crisis for the East Asian region.

At present, leaders of some countries in the Western Pacific region are worried over the US’s possible global and strategic withdrawals, and are expressing their doubts over an East Asia without the US. The reality, however, might just be the opposite. In recent years, it has become increasingly clear that the US is making a return to Asia. Even former US President Barack Obama, more moderate than Trump, had advocated for a return. This is because the US is becoming wary of China’s growing influence.

At the same time, another harsh reality is that many of the US’s allies in Asia are increasingly uncoordinated and unable to act in concert against China’s expansion, forcing the US to face China’s power head-on. Additionally, Trump is a leader who distrusts his allies.

In conclusion, if we can only use the Cold War to explain why two countries get locked in battle, we can hardly be optimistic about the future of East Asia, and even the world. But history has not ended, or, we should perhaps say that there should not be an end to history. Rather than rummaging through the historical garbage bin for outdated explanations and concepts, we should instead seek better ways to understand and shape the future of China, the US, and the world.