In the last of four articles, cultural historian Cheng Pei-kai shares his impressions of the Moscow he knew from a decade ago. On a day trip from Moscow, he is awed by St. Sergius Monastery, the spiritual centre of the Russian Orthodox Church. 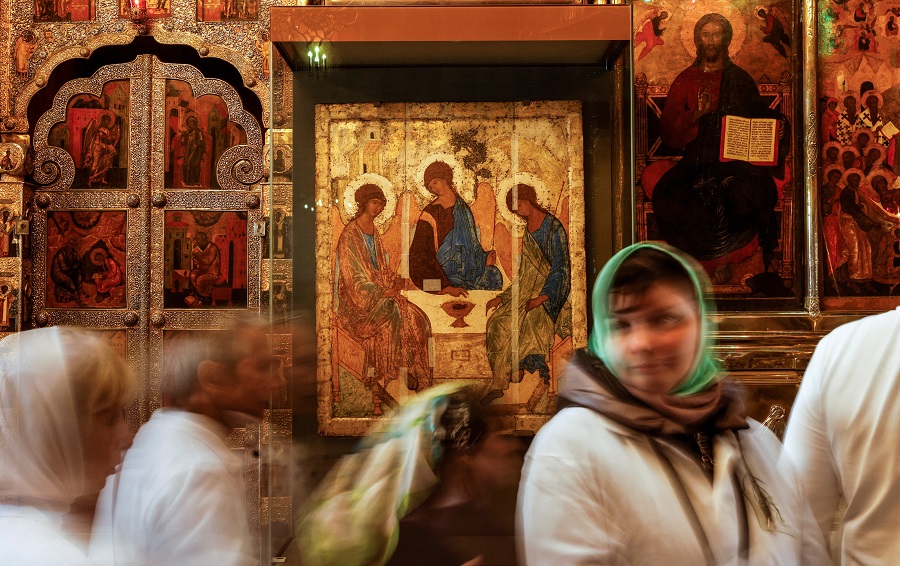 Believers gather near the Trinity icon at the Trinity Lavra of St. Sergius in the town of Sergiyev Posad, Russia, 18 July 2022. (Maxim Shemetov/Reuters)

Grace Chong - 25 November 2022
China’s resurgence of Covid-19 infections has widened the gap between the young workers opposed to the tightening of controls, and the older generation that feel safer with strict measures in place. Given that the elderly make up a high proportion of the Chinese population, Chinese authorities seem to be holding fast to the dynamic-zero policy. Zaobao correspondent Wong Siew Fong tells us more.
Read more
Translated by Grace Chong on 17 October 2022

We arrived at St. Sergius Monastery at around 7am in the morning. Due to Moscow’s high latitude, it was already late autumn in early October and the sun was just rising. As the bus dropped us off on a steep slope at the edge of Sergiev Posad, Russia’s fields seemed vast indeed, stretching out into the horizon. I was reminded of a line from one of Tang dynasty poet Du Fu’s poems: “My gaze follows the returning birds as they disappear into the forest (决眦入归鸟)."

The monastery sits on a small hill in the forest. Set against the grey-blue sky, its staggered onion domes looked magnificent. From far away, the complex could pass for a mediaeval castle with a strategic vantage point, fortified high walls and moat-like fields.

A cold morning wind blew in like wild horses galloping through the fields. I tightened my jacket and thought: the monastery was founded in 1345 when the Mongol Golden Horde ruled over Russia. Would the founding saint have ever thought that it would become a spiritual centre of the Russian Orthodox Church, resisting paganism with devout faith?

Our tour guide said that as we were a group, we could only enter at 9.30 am. We waited in the cold autumn wind, as if nature was testing our resolve to visit this sacred place.

Six centuries later, the St. Sergius Monastery stands magnificent, solemn and as regal as a royal palace. It became a UNESCO World Heritage Site in 1993.

The monastery’s full name, The Trinity Lavra of St. Sergius, is quite a mouthful, but St. Sergius Monastery is the most important monastery of the Russian Orthodox Church and is the seat of the Russian Patriarchate today. It was founded in the 14th century by a man named Sergius and his older brother Stefan, a monk.

The monastery began life as a little wooden church on the hill where the brothers practised asceticism, or living a life of seclusion. Such a way of life was not easy. Often cold and hungry, Stefan could not bear the brutal test and eventually transferred to a monastery in Moscow. Sergius stayed on, giving sermons in the harsh wilderness alone.

Slowly, stories about Sergius’s unwavering faith in God began to spread, inspiring other monks to follow him and the monastery grew. Six centuries later, the St. Sergius Monastery stands magnificent, solemn and as regal as a royal palace. It became a UNESCO World Heritage Site in 1993.

A miracle and a promise of hope

A well-known legend adds to the monastery’s mystique and gives worshippers greater confidence that God’s grace will be given unto them. The story goes that when Sergius was praying for his brethren one night, he heard a voice from heaven calling his name. Startled, Sergius opened the window to see who it was but found no one.

Suddenly, a great light shone from up above and a bellowing voice said, “Sergius, know that your prayers for your disciples have been answered. See the many monks who have gathered in your fold in the name of the Holy Trinity!” Then, a flock of white birds landed in the monastery.

Again the voice said, “Your disciples shall multiply and number no less than these birds. Once they have followed you, they will not leave you. Like the winged creatures of heaven, they shall be blessed with every virtue.”

I have always suspected that since he was the only one there, Sergius may have spread this story himself. Regardless, with this miracle, the monastery was able to gather like-minded believers and grow to its current size.

Everything was orderly, solemn and peaceful, and befitting of a place for monks to grow in spirituality.

Entering the monastery, we saw busy monks going about their daily routine, each clad in a long, black robe and a black headdress. Groups of twos or threes gathered under ancient trees or along the walkways, enthusiastically discussing who-knows-what. I didn’t feel comfortable walking up to them — I wouldn’t have understoond what they were saying even if I did — so I just stood in the distance and observed their body language.

A white-bearded elderly monk exuded calm and elegance. His beard swayed slightly as he spoke, like a lake stirred by a soft breeze. The middle-aged monk standing next to him nodded and flashed a slight smile, as if he had just gleaned a pearl of wisdom.

The bright and melodious sounds of church bells rang out and echoed through the compound before slowly fading out. A priest wearing a golden cross on his neck approached. His commanding presence turned the atmosphere solemn in an instant. A few women with headscarves came forward, bowed before the priest, kissed his ring, bowed again, and left. Everything was orderly, solemn and peaceful, and befitting of a place for monks to grow in spirituality.

... the monastery was bright and splendid, like heaven in the hearts of believers.

As for the tourists, they came for the golden domes, whether onion-shaped, mushroom-shaped, towering or bunched together in varying heights. There were many other domes — blue ones with golden stars or golden rings on them, or others with a golden spire atop a pale green roof.

As the sun rose, the domes shimmered in the light. The glory of the Holy Trinity filled the earth; the monastery was bright and splendid, like heaven in the hearts of believers.

This article was first published in Chinese on United Daily News as “謝爾蓋修道院” in 2013.