In the event of hostilities in the Taiwan Strait, Manila’s defence treaty with the US will give it little room to manoeuvre. Philippines President Ferdinand Marcos Jr’s recent visit to China underscores his intent to have a constructive relationship with China, and it remains to be seen how the Philippines will navigate its relationships with both the China and the US. 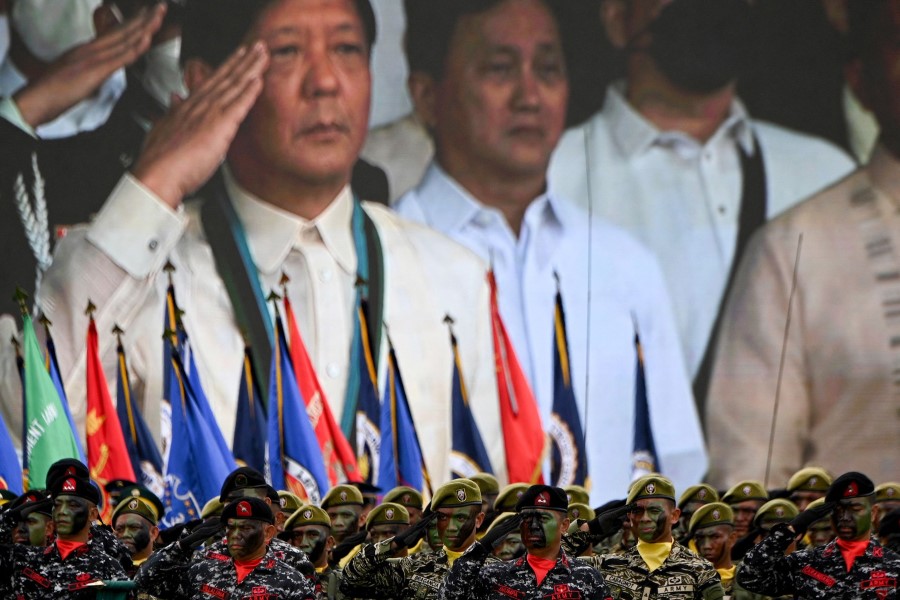 Philippine President Ferdinand Marcos Jr. (centre) is seen on a video screen as he salutes in front of the troops during the 87th anniversary celebration of the Armed Forces of the Philippines, at the military headquarters in Quezon City in suburban Manila on 19 December 2022. (Ted Aljibe/AFP)

Candice Chan - 30 January 2023
A mall in Shenzhen came under fire for putting up white lanterns with black text as part of its Chinese New Year decorations, while an “ugly” rabbit-shaped light decoration was removed from another mall in Chongqing. Academic Zhang Tiankan muses on tradition and innovation, and the evolution of traditional decorations.
Read more
Translated by Candice Chan on 18 January 2023

President Ferdinand “Bongbong” Marcos Jr’s recent visit to China underscores his intent to have a constructive relationship with China, and a balanced and diversified Philippine foreign policy. But as Sino-US relations deteriorate and US President Joseph Biden veers towards strategic clarity to defend Taiwan amid heightened cross-strait tensions, the risk of getting entangled in a Sino-US conflict over Taiwan has become a major policy issue for Manila.

In the event of a Sino-US conflict over Taiwan, the legal status of Manila’s commitment to the "one China" policy would be tested against its obligations under the 1951 Philippine-US Mutual Defense Treaty (MDT). The treaty highlights the “sense of unity”, “common determination” and “collective defence” against an “external armed attack” and “potential aggressor”, but it is ambiguous about the specific geographic scope of its application in the Pacific.

While the Philippines sees the utility of the MDT primarily for a South China Sea contingency, the US can invoke Article IV of the MDT in a Taiwan conflict. The article states that each party deems that “an armed attack in the Pacific area on either of the Parties would be dangerous to its own peace and safety and declares that it would act to meet the common dangers in accordance with its constitutional processes”.

... history has shown how the Philippines could be involved in a war over Taiwan even in the absence of a US formal invocation of the MDT.

With respect to “constitutional processes”, the 1987 Philippine constitution gives the Congress the power to declare “the existence of a state of war”; only under such conditions or another national emergency, would the president be authorised by law to wield the necessary powers “to carry out a declared national policy”.

As such, congressional intervention would be an important variable that needs to be closely watched. Manila can also mitigate entrapment risks by exercising its sovereign authority on where and how the US military could access and use its facilities. The preamble to the Enhanced Defense Cooperation Agreement (EDCA) states that “US access to and use of facilities and areas will be at the invitation of the Philippines and with full respect for the Philippine Constitution and Philippine laws”.

Philippines may get embroiled in Taiwan conflict

Yet, history has shown how the Philippines could be involved in a war over Taiwan even in the absence of a US formal invocation of the MDT. Manila could send boots on the ground and/or provide logistical access for US military operations. This was the case in the Korean War, Vietnam War, and US wars in Afghanistan and Iraq.

Put differently, Manila is caught in a bind. On one hand, it fears Washington’s abandonment in the event of a South China Sea conflict with China. Manila has repeatedly demanded clarity and immediacy in US alliance commitments. To this end, Manila concluded the 1998 Visiting Forces Agreement (VFA) and the 2014 EDCA with Washington to secure US military presence in the region and security guarantees. On the other hand, the Philippine security establishment increasingly fears entrapment, where the country’s military is drawn into a Sino-US conflict over Taiwan.

This reality became evident following former US House Speaker Nancy Pelosi’s visit to Taiwan in August 2022. In September 2021, the Philippine ambassador to America said that the US can use Philippine bases in a Taiwan conflict if it is important for the Philippines’ security. The condition, however, remains open-ended and is contingent on many indeterminate factors.

At the moment, the risks of entrapment are increasing, at least from the operational perspective. Since its coming to power, the Marcos Jr administration has taken steps to bolster security ties with Washington. Both countries have agreed to explore joint patrols in the South China Sea, and accelerate the implementation of the EDCA through infrastructure enhancement at various locations.

Both allies are looking at adding more sites for American military access, including in the northern province of Cagayan near Taiwan, to facilitate faster response to crisis situations. They have also agreed to double the number of troops involved in joint exercises and plan to sharply increase the number of bilateral defence activities in 2023.

Should the Philippines provide basing access in a cross-strait conflict, Manila would certainly face Chinese sanctions.

Given the timing of these initiatives, Beijing would likely see these Philippine moves as siding with America to undermine its "one China" principle and enable US military prepositioning for war-time contingencies. Should the Philippines provide basing access in a cross-strait conflict, Manila would certainly face Chinese sanctions.

Should China successfully reunify Taiwan by force, China could inch closer to the northern Philippines and it will be easier for China to break through the first island chain.

How the Philippines should respond to a Taiwan contingency is not simply a legal question but a critical national security concern. There are around 200,000 overseas Filipino workers in Taiwan; repatriating them during an armed confrontation over Taiwan would be an enormous undertaking. This will be compounded by a massive human migration of Taiwanese nationals.

Even if Manila manages to sidestep the risks associated with entrapment in a Taiwan Strait conflict, it cannot escape the geopolitical ramifications of such a historic event. Should China successfully reunify Taiwan by force, China could inch closer to the northern Philippines and it will be easier for China to break through the first island chain.

China’s takeover of Taiwan would also augment its power projection capability in the South China Sea. This would consequently impact Philippine maritime and security interests. Given the Philippines’ geographic proximity to Taiwan, its status as a US defence treaty ally and its stakes in the South China Sea, there will be complications in Manila’s desire to be neutral in a Taiwan contingency.

Related: [South China Sea] Should the Philippines avoid playing the lead role amid rising tensions in SCS? | Does stoking anti-Chinese sentiment yield political gain in the Philippines? | Between economy and security: Does the Philippines' Marcos Jr have a choice? | Can the Philippines stay neutral in a Taiwan Strait military confrontation between the US and China?