​Taiwan’s four-question referendum did not pass, to the relief of the DPP and disappointment of the KMT, says Professor Yoshiyuki Ogasawara of the Tokyo University of Foreign Studies. That the motion to reinstate an import ban on pork with ractopamine, namely US pork, did not go through is significant, as it is an election issue that could have a detrimental impact on the DPP. Results aside, the referendum itself was a show of democracy at work and in some ways a bulwark against reunification with the mainland. 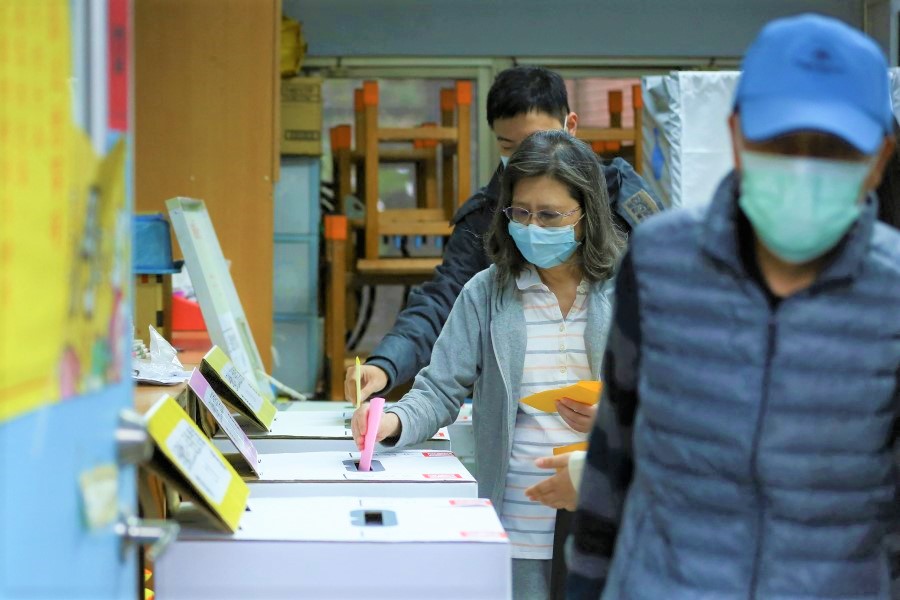 People wearing face masks to prevent the spread of Covid-19, cast their vote at a polling station while participating in a four-question referendum in Taipei, Taiwan, 18 December 2021. (Annabelle Chih/Reuters)

Candice Chan - 6 December 2022
Commentator Chen Kuohsiang notes that even after the 20th Party Congress and talks between Chinese and US Presidents Xi Jinping and Joe Biden during the G20 summit, the Chinese economy is not facing an easy time, not least because of Covid-19 controls, the US's trade restrictions and China's stringent policy on private enterprises.
Read more
Translated by Candice Chan on 24 December 2021

On 18 December 2021, a national referendum on four issues was held in Taiwan. All four referendum proposals were voted down, with 47-49% of votes in favour and 51-53% of votes against the initiatives. Voter turnout was 41%. With regard to the focal issue of the reinstatement of the import ban on pork containing traces of ractopamine, namely, US pork, 48.8% were in favour and 51.2% were against. The referendum was fiercely contested on all four questions, with the opposition Kuomintang (KMT) voting “yes” to all, and the Tsai Ing-wen administration and the ruling Democratic Progressive Party (DPP) voting “no” to all. The result was a defeat for the KMT, to the relief of the Tsai administration and the DPP.

Public opinion on the US pork import issue over the past year has been one-sided, with around 60% supporting reinstating the ban on imports and around 30% opposed to it. In the last opinion poll in November however, that difference had narrowed significantly. This can be attributed to the fact that the Tsai administration focused its efforts on gaining a certain level of understanding from the electorate that no health effects have been reported within the regulation value for ractopamine content; that an import ban would be disadvantageous to Taiwan as a country that promotes free trade; and that it is important for Taiwan that relations with the US not be adversely affected.

The Taiwanese are uncompromising when it comes to food safety and many DPP supporters are in favour of the ban. As a result, the Tsai administration’s proposed initiative of not restoring the ban on US pork imports came under constant criticism as a policy that would “sacrifice the health of the Taiwanese people for the sake of relations with the US”. The KMT skilfully exploited this conflict. The national referendum, which the DPP had backed strongly when it was in opposition, was not only significant in terms of political participation. It was also a means for opposition parties to attack the ruling party, and opposition supporters were expected to be eager to vote.

The KMT too could not maintain unity. New Taipei City mayor Hou You-yi and Taichung mayor Lu Shiow-yen distanced themselves from KMT chairman Eric Chu who called the “no-confidence motion against the administration”. This was a shrewd political decision based on the perception that the party’s policy was out of sync with the will of the majority of the people. The two mayors’ neutral stance drew criticism from within the party, but both mayors maintained a stance of refraining from divulging whether they were for or against the motion. Both enjoy a high level of satisfaction with regard to their municipal administrations and are likely to be re-elected in the 2022 mayoral elections.

The national referendum is on a different level than the presidential election and as such the outcome should not be overinterpreted. However, given that a ban on US pork is the election issue that could have the most detrimental impact on the DPP alongside a ban on food imports from Fukushima, the fact that the DPP did not lose is highly significant. The “direction that Taiwan is headed” is an election issue that favours the DPP. In a presidential election where this becomes a point of contention, the DPP will retain its position of advantage.

A more critical stance toward the DPP can however be observed when it comes to the 2022 local elections. To begin with, the difference between those who agree and disagree is minimal. In addition, voters make a distinction between issues relating to their daily lives and the issue of the “direction that Taiwan is headed”. The votes in the national referendum by province and city show a tendency to vote in favour of KMT in the prefectures and cities where KMT is associated with a bright prospect. While in national elections Taiwanese politics have entered an era of relative advantage for the DPP, at the level of local elections, a different logic is at work.

Ahead of this latest referendum, hundreds of briefings were held across the whole of Taiwan. The DPP instructed all prefectural and city mayors, members of the Legislative Yuan, and local legislators to hold briefings in their constituencies. According to a DPP official source, 692 national referendum briefings were held, ranging from a dozen or so attendees to more than 10,000.

Some voters had no interest in the national referendum and some did not vote, but the fact that policy briefings of this nature were held is in itself a highly commendable example of democracy in practice. Certainly, a 41% voter turnout cannot be regarded as low. Both in terms of briefings and voter turnout, Japan lags behind Taiwan, while in China briefings of this kind and the referendum itself would be unthinkable.

The number of briefings is not the only indicator of democracy at work. On the issue of construction of the liquefied natural gas (LNG) terminal, the Tsai administration interacted with environmental groups and partially revised the plan, moving the construction site offshore to protect the algae reef. Some environmentalists now support the Tsai administration, which responded flexibly to criticism because of the referendum.

The national referendum was established by the Referendum Act in 2003 based on the principle of direct democracy and is positioned as a means for the electorate to directly express its will on important policies. Amid the escalation of China’s military threats against Taiwan, both the ruling and opposition parties are making every effort to hold briefing sessions, which may give foreign observers the impression that Taiwan is taking an overly relaxed approach. However, Taiwan’s democracy is the major reason behind the island’s refusal to accept reunification with China. Democracy in Taiwan is not merely a slogan. Rather, it is put into practice on a daily basis. This latest reaffirmation of Taiwan’s vigorous democracy is highly significant.