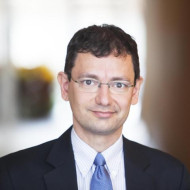 Nicolas Véron is a senior fellow at the Peterson Institute for International Economics and host of the Peterson Institute's Financial Statements virtual event series. He is also a senior fellow at Bruegel, a Brussels-based economic policy think tank he helped cofound in 2002-04. A French citizen and graduate of École Polytechnique and École Nationale Supérieure des Mines de Paris, he has held various positions in the public and private sectors, including as corporate adviser to France's labour minister (1997–2000), as chief financial officer of the publicly listed internet company MultiMania / Lycos France (2000-2002), and as an independent financial services consultant. Since July 2013, he has been a board member of the derivatives arm of DTCC (the Depository Trust and Clearing Corporation), a global financial infrastructure company. By Tianlei Huang , By Nicolas Véron 15 Nov 2022
Peterson Institute of International Economics researchers Tianlei Huang and Nicolas Véron analyse the seeming anomaly that an increasingly statist policy environment in China has not prevented a rapid rise of the private sector. While various factors have paused this rise, will the upward trajectory likely resume in President Xi’s third term?