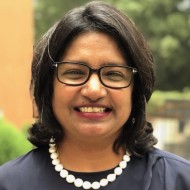 Dr Rajeswari Pillai (Raji) Rajagopalan is a distinguished fellow and heads the Nuclear and Space Policy Initiative at the Observer Research Foundation (ORF) in New Delhi. She is also a non-resident Indo-Pacific fellow at the Perth USAsia Centre from April-December 2020. She was also the technical advisor to a new United Nations Group of Governmental Experts (GGE) on Prevention of Arms Race in Outer Space (PAROS) from July 2018 to July 2019. As the senior Asia defence writer for The Diplomat, she writes a weekly column on Asian strategic issues. She was previously an assistant director at the National Security Council Secretariat, Government of India, a research officer at the Institute of Defence Studies and Analyses in New Delhi, and a visiting professor at the Graduate Institute of International Politics, National Chung Hsing University, Taiwan. She has authored or edited nine books including Global Nuclear Security: Moving Beyond the NSS (2018), Space Policy 2.0 (2017) and Nuclear Security in India (2015). She has published research essays in edited volumes and peer-reviewed journals such as India Review and the Strategic Studies Quarterly, and has also contributed essays to newspapers such as The Washington Post, The Wall Street Journal, Times of India, and The Economic Times. 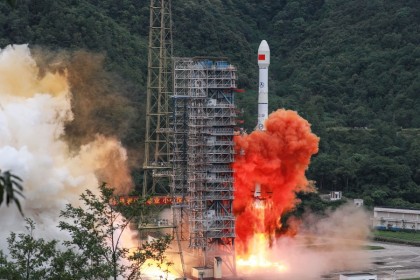 From earth to space: India and China's space programmes gear up for intense competition ahead

By Rajeswari Pillai Rajagopalan 29 Jun 2020
China launched the final satellite for the BeiDou navigation satellite system on 23 June. Consisting of 35 satellites, BeiDou is an impressive operational satellite navigation system significant for China in a number of ways. Most importantly, it removes China's reliance on the US GPS system. China's space programme started in the late 1950s with rocket technology transfer from the Soviet Union, while India's space journey began in the 1960s with support from the US and France. Both countries have come a long way and are now ratcheting up their efforts to secure a foothold in this frontier as the world’s geopolitical battles get launched into space.