Taiwanese generally think there will not be war, and they are unprepared for it

Surveys show that the Taiwanese think war is unlikely, and they are aware that they are generally not well prepared for it, believing that the US and Japan will come to Taiwan’s assistance if mainland China launches an offensive. But recent comments by the US and Japan seem to suggest that strategic ambiguity is very much in play. 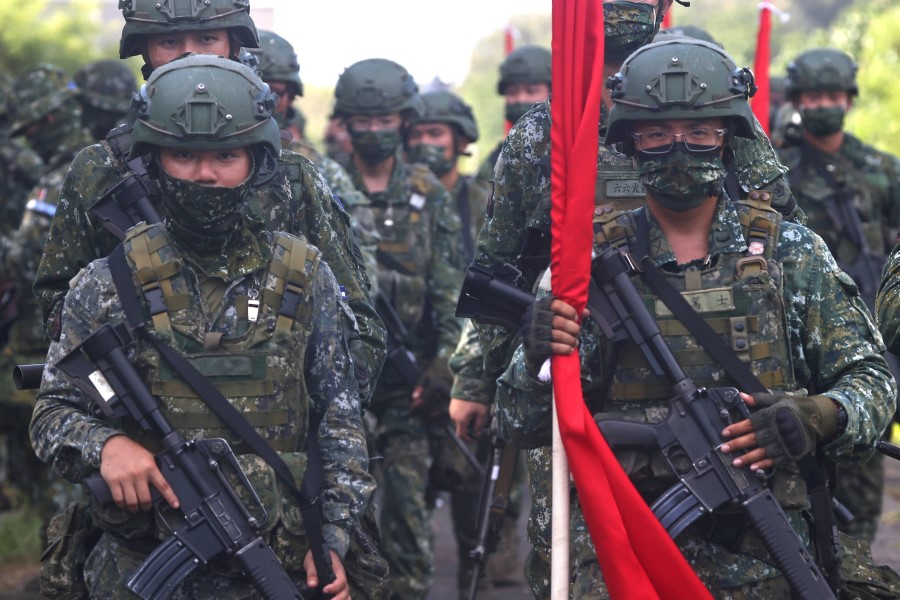 Soldiers march to position during an anti-invasion drill on the beach during the annual Han Kuang military drill in Tainan, Taiwan, 14 September 2021. (Ann Wang/Reuters) US academic: Since Southeast Asia is undecided, the US will work with willing partners

Candice Chan - 28 October 2021
US President Joe Biden has largely maintained his predecessor's tough approach to China in terms of containment and competition. This includes gathering allies in groupings such as the Quad and AUKUS, and being vocal about China's moves in the South China Sea, Taiwan and other areas such as climate change and trade. However, this strident approach may not be the most effective in gaining support from ASEAN, which is wary of possibly antagonising China. This gives China the advantage, at least in the Southeast Asian region, and the US may in turn rely more heavily on the Quad powers.
Read more 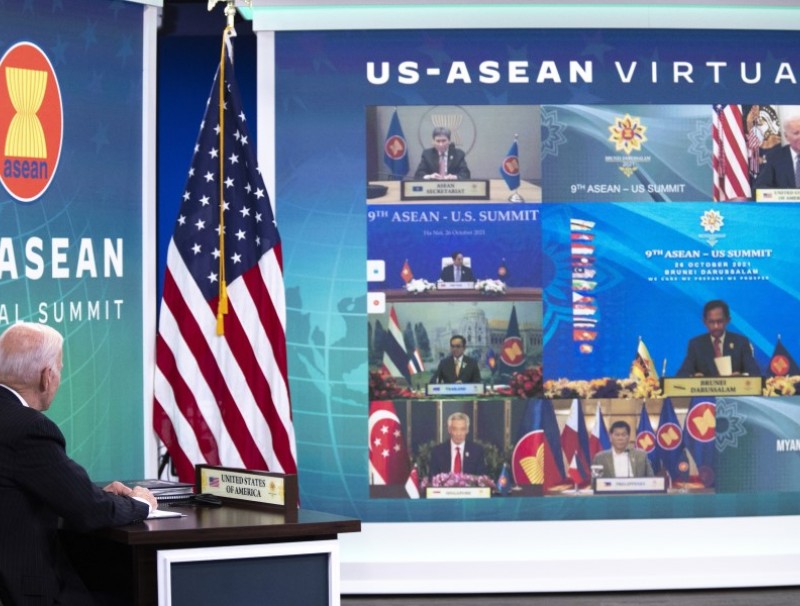 Candice Chan - 27 October 2021
The EU and ASEAN are supporters of a rules-based global system, says Joergen Oerstroem Moeller. As such, they can use their collective weight to persuade Washington and Beijing to focus less on their bilateral tensions and more on solving contemporary problems.
Read more Candice Chan - 26 October 2021
With a strong push by the pro-establishment camp, the Hong Kong government has made a breakthrough in legislative efforts against discrimination against mainlanders. But negative feelings did not happen overnight. With increasing mainland arrivals over the years, Hong Kongers have been feeling that their space, rights and even property are being encroached upon. Without solving the underlying issues, will legislation improve the situation much?
Read more Candice Chan - 22 October 2021
Hong Kong Chief Executive Carrie Lam recently gave her 2021 policy address, in which plans were laid out for a 20-year project to develop a Northern Metropolis. Commentator David Ng affirms the need to increase land and housing supply to resolve Hong Kong’s residential challenges such as subdivided units, while pointing out that the long timeline could mean challenges in following through on the project.
Read more
Translated by Candice Chan on 23 November 2021

In recent months, questions of what the people of Taiwan would do and how the US and Japan would react if mainland China launched an armed offensive have come under attention and discussion.

A Taiwan survey found that the Taiwanese believe that cross-strait war is unlikely, while the sense of preparedness and confidence in defence has shown a downward trend, albeit within acceptable levels. However, there is an over-reliance on the security commitments of the US and Japan.

...when asked if mainland China would send troops to Taiwan sooner or later, 26% said yes while 64% stated they believed that it would not happen.

There could be a mismatch between Taiwanese expectations and American and Japanese policies towards Taiwan, as well as what the latter can realistically do for Taiwan. For the Taiwanese to base their own security and defence on the goodwill and assistance of other countries and neglect cross-strait communication and negotiation is really barking up the wrong tree and overly one-sided.

On 2 November, the Taiwan Foundation for Democracy announced that on the issue of a cross-strait military crisis, over 60% of the Taiwanese surveyed felt that cross-strait war was unlikely; when asked if mainland China would send troops to Taiwan sooner or later, 26% said yes while 64% stated they believed that it would not happen.

This shows that people do not think Taiwan and mainland China are at risk of military conflict, and that if mainland China launches an offensive on Taiwan, less than half of the people are confident about the defensive capabilities of the Taiwanese military. Only about 11% of respondents gauged the Democratic Progressive Party (DPP) to be very well prepared; none of them were from the 25 to 34 age group.

This shows that the Taiwanese generally think there will be no war, and they are not confident that the government is prepared for war. And for those most likely to find themselves on the battlefield, that is those aged from 25 to 34, none feel that the DPP is well prepared. Interestingly, many of those in this age group are also DPP supporters.

The Taiwanese believe they can depend on the US and Japan

In August, the Taiwan New Constitution Foundation also released a survey in which 64% of respondents felt Japan would help to defend Taiwan. Overall, Taiwanese think war between Taiwan and mainland China is unlikely, and while their sense of preparedness and confidence in defence is acceptable, there is a high reliance on the US and Japan to defend Taiwan. Notably, confidence in defence has fallen by 2.4% from last year.

In fact, on 1 November, US Secretary of State Antony Blinken said in an interview on the CNN’s State of Union, "What I can tell you is that we remain committed, resolutely committed, to our responsibilities under the Taiwan Relations Act (TRA), including making sure that Taiwan has the ability to defend itself from any aggression," adding that the US will “make sure that no one takes any unilateral action that would disrupt the ‘status quo’ with regard to Taiwan.”

However, when asked whether the US would come to Taiwan’s defence if China attacked, Blinken only repeated that the US would ensure that Taiwan has the ability to defend itself in line with the TRA, without giving a clear reply on whether US troops would be sent to Taiwan. This shows the US is still intentionally showing strategic ambiguity in its cross-strait policy and not revealing its actions, leaving some room for imagination in terms of political and military action. This would be a deterrent to the mainland China authorities, and limit possible extreme action by the DPP.

On 18 April, US President Joe Biden released a joint statement with former Japanese Prime Minister Yoshihide Suga, stating the importance of peace and stability across the Taiwan Strait, and calling for the resumption of dialogue; however, this is not a security commitment by the US and Japan towards Taiwan, nor does it mean that the US and Japan will definitely send troops to defend Taiwan if mainland China launches an armed attack.

Strategic ambiguity likely to be maintained

If the US abandons strategic ambiguity and declares that it will help Taiwan if mainland China attacks, that would be crossing the “red line” in mainland China’s policy towards Taiwan, while possibly encouraging extremist forces for Taiwan independence to recklessly and blindly provoke mainland China and send both sides to the brink of war. The Biden administration would probably also do all it can to avoid this situation.

On the other hand, the US pullout from Afghanistan and the rapid collapse of the Afghan government has prompted doubts that the US is not sufficiently fulfilling its security commitments to its allies, as also happened with Vietnam before. Biden previously said that the Taiwan issue is fundamentally different from Afghanistan, and the US keeps its commitments to its partners. He stressed: “There’s a fundamental difference between Taiwan, South Korea, NATO.”

The agreements between the US and these bodies and entities are not based on the fact that they are in civil war, but on the fact that each has a united government and that the US is committed to the promise as laid down in Article 5 of NATO’s Washington Treaty on collective defence; this is the same for Japan, South Korea, and Taiwan. US national security adviser Jake Sullivan has said: “We believe that our commitments to our allies and partners are sacrosanct and always have been. We believe our commitment to Taiwan and to Israel remains as strong as it's ever been.”

The comments by the US and Japan on Taiwan’s security are sometimes clear and sometimes ambiguous.

Similarly, the security commitment of Japan’s leaders to Taiwan also seems shaky and unclear at times. For example, in late June this year, then Japanese Deputy Defence Minister Yasuhide Nakayama said “we have to protect Taiwan as a democratic country”. Subsequently, then Chief Cabinet Secretary Katsunobu Katō said that was Nakayama’s personal view.

On 24 June, Japanese Defence Minister Nobuo Kishi said the security of Taiwan was directly linked with that of Japan. And on 5 July, then Deputy Prime Minister Taro Aso said that if Taiwan is invaded by mainland China, that would be an “existential threat”, and Japan would have to defend Taiwan with the US. Then, on 13 July, in a Cabinet session where Japan’s annual white paper “Defense of Japan 2021” was presented, Kishi said for the first time: "Stabilising the situation surrounding Taiwan is important for Japan's security and the stability of the international community."

The comments by the US and Japan on Taiwan’s security are sometimes clear and sometimes ambiguous. In between these two ends of the spectrum, the US and Japan show a high level of attention to Taiwan’s security and how it relates to their national interests; but maintaining strategic ambiguity ensures that they have the freedom and flexibility to take any form of retaliatory action.

This takes into account China’s “face” and dignity as a world power, and leaves room for negotiation in the future. It also takes into account the Indo-pacific strategy built up by the US amid China-US competition, as well as America’s strategic plans and needs to contain China.

The problem is that Taiwan is a flag-bearer and a pawn in the US-China competition for dominance, and part of mainland China’s confident declaration of the “China dream” for reunification and rejuvenation of the people, but the Taiwanese generally have no awareness of war and are not prepared for it, and are highly dependent on help from the US and Japan with no sense of urgency in defending their own security. Also, Taiwanese leaders have repeatedly tested mainland China’s red line in its policy towards Taiwan by claiming that Taiwan and mainland China are “neighbours” and “two countries” that have nothing to do with each other.

Related: Has the US shifted its position on Taiwan, again? | Both sides of the Taiwan Strait fear imminent war | Why the status quo in the Taiwan Strait is quietly changing | 'Afghanistan today, Taiwan tomorrow’? | Chinese legal expert: ‘Legal reunification’ with Taiwan the best solution