Till the day we reunite: Escape from Chengdu to Washington DC, and then what?

Food writer Chuang Tzu-i, wife of the US Consul General in Chengdu, shares her experience leaving Chengdu in haste with her two sons over two months ago, and coping with her life in limbo back in Washington DC. 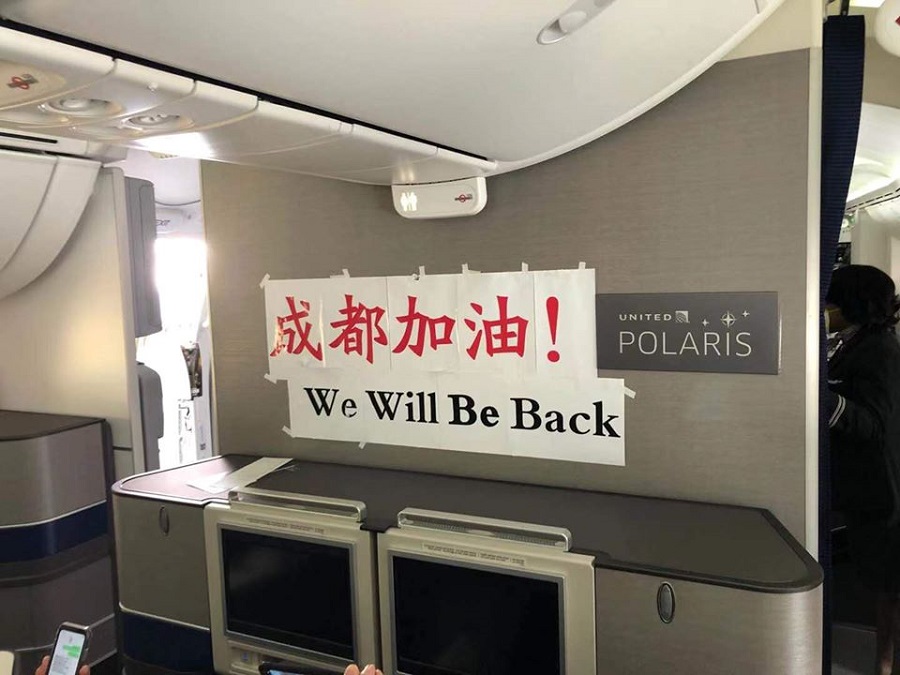 The last flight we took from Chengdu to San Francisco. The banner reads: "Chengdu, you can do it! We will be back".

Grace Chong - 28 May 2020
US academic Ma Haiyun suggests that the US is making greater efforts to get the Muslim world on its side as its competition and even confrontation with China gets more intense. Internationalising the Xinjiang issue may be one of the ways it plans to do this, which will have implications for Southeast Asian countries.
Read more

Grace Chong - 28 May 2020
Greater restrictions have been imposed by the US in recent months to choke off US-related chip-making supplies to Huawei. As the noose tightens around its neck, it has to think fast about how it can produce its own chips domestically to minimise the impact.
Read more

Grace Chong - 22 May 2020
The world has become greener and cleaner because of a drastic drop in human activity brought about by the pandemic. Professor Koh Lian Pin opines that these effects may be only temporary but the fact remains that the world needs to direct more attention to climate change. He sees China playing a bigger role in implementing nature-based solutions for climate and sustainable development. With its experience and immense investments in scientific research and development, it could even lend a hand to countries in the Asian region.
Read more 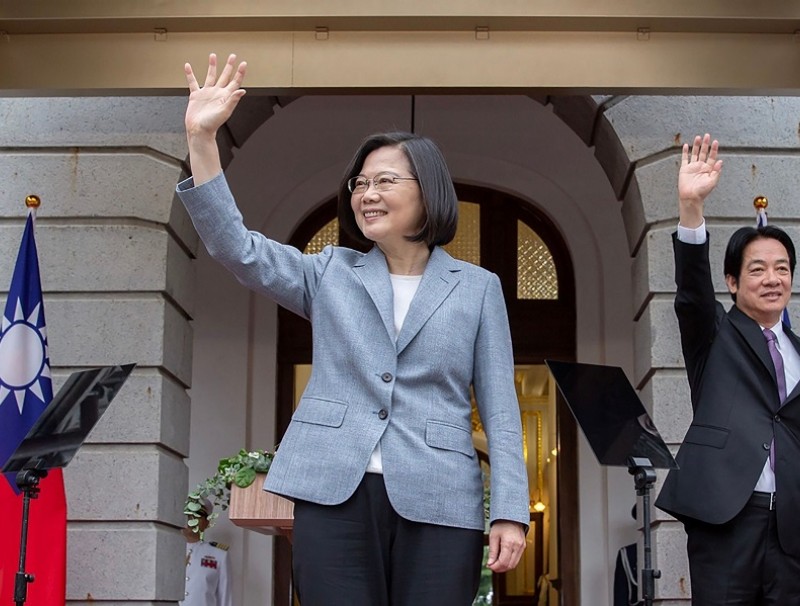 Grace Chong - 21 May 2020
Taiwan President Tsai Ing-wen’s inauguration speech yesterday delved into various areas concerning the future direction of Taiwan, but the most important aspect was the strong tone she set regarding the handling of cross-straits relations. Chuang Hui Liang and Edwin Ong analyse the nuances of her speech and gather reactions from Taiwan and mainland China.
Read more
Translated by on 27 March 2020

On 30 January, the US consulate general in Wuhan evacuated all of its staff while the US embassy in Beijing and other US consulates in different parts of China announced the initial phase of “authorised departure”, meaning that non-essential personnel and their family members were allowed to evacuate.

As consul general of the US Consulate General in Chengdu, Chuang Tzu-i’s husband Jim Mullinax was classified essential personnel and certainly not about to leave the helm. Tzu-i and her two sons decided to stay put in Chengdu as well, the only state department family members who opted to do so.

On the morning of 1 February, however, Tzu-i was informed by the US government that she and her two sons had to evacuate as international flights to and from China were getting cancelled. They were put on the last direct flight from Chengdu to San Francisco the next day and would be temporarily staying at rental apartments in the suburbs of Washington DC. Thus began the Mullinax family’s journey of being separated in two lands.

In the following Facebook post published on 23 March 2020, Tzu-i documents her thoughts on her voyage from Chengdu to Washington, D.C. She describes the situation at the American capital and pours out her feelings and worries as she and her two sons look forward to the day they can be reunited as one family again.

From the time that the Covid-19 outbreak swept the world to nearly two months after my arduous journey with my two sons from Chengdu to Washington DC, I’ve never felt more afraid.

People like us who had just gotten out of China were a little dazed, but like everybody else, we were quickly convinced that Covid-19 wouldn’t be a problem in the US.

I remember being ordered by the US Department of State to evacuate with my children and how we flew from Chengdu to San Francisco on the last direct flight available. When we landed at the San Francisco International Airport on 3 February, the Centers for Disease Control and Prevention (CDC) staff merely took our temperatures, asked if we had been to Hubei in the last 14 days, and sent us to the waiting area where our passports were to be checked. The enclosed area was packed with over a hundred people and we waited for two hours. No one wore a mask. The people who finally cleared customs were like caged birds that were set free — apart from a card that reminded us to inform the CDC should we develop a fever, there was no other form of restraint. People like us who had just gotten out of China were a little dazed, but like everybody else, we were quickly convinced that Covid-19 wouldn’t be a problem in the US.

A month later, the outbreak took a sharp turn for the worse in European countries and Americans abroad were flocking home. From what I saw on television, the situation at the airports was the same as what I had experienced: crowded and disorderly, no administration of tests, no masks, and no mandatory quarantine. At that time, community spread was already present in Washington state and Italy had already been locked down. When the Americans suddenly realised that the pandemic was closing in on them and began re-evaluating their trusty public health system, the truth hit them hard: testing capabilities were lacking, medical supplies were inadequate, and there were practically no contact tracing and quarantine measures put in place.

Following sharp increases in confirmed cases and number of deaths, all of the US’s commercial and cultural events have been cancelled. In the beginning, parents were eager to set up play dates for their children due to the closure of schools and people still had the energy to make fun of instances of toilet paper hoarding. Now they are all scared and are obediently practicing social distancing at home.

Without a home to return to, my children and I could only remain in home quarantine in the dark and cramped basement.

Lugging our three suitcases and holding on to my two children, we moved a total of four times from hotels and serviced apartments to Airbnb homes. Each time, I didn’t dare to book our accommodation for too long, worried that we wouldn’t be able to cancel the booking should we be allowed to return to Chengdu. I didn’t dare to book for too short a time either, afraid that we’d be left homeless if we couldn't get back to Chengdu. As we already knew that we would be officially relocating to Washington this July, we started applying for housing loans early this year. I took the opportunity of being in Washington DC to complete the housing purchase and used the deed as proof of residency to enrol my children in a local school (which was unfortunately closed merely nine days later). I even intentionally rented an Airbnb apartment in close proximity to our new home — that we couldn’t live in yet — so that I could easily run errands, and my children could get to school quickly. It was not until we moved in that I realised that I had checked ourselves into a dark basement that saw no daylight.

Our newly-bought home is in a good location with easy access to amenities and is quite affordable. The only thing is that it’s old and dated — the kitchen facilities are no longer usable, and its old-fashioned partitioning makes the house look smaller than it actually is. Thus, over the past month, I’ve been searching high and low for a renovation contractor. As our previous contractor possesses a Virginia license and we are in Maryland, the HOA (Homeowners Association) forbade them from carrying out the renovation works. Alas, I had to look for another contractor and ask for a quotation all over again. After multiple rounds of back and forth that was extremely time-consuming, I finally found another contractor who was able to start work almost immediately. With materials prepared and ready to go, I now worry if the workers will get infected, or if the government will suddenly halt work after it has commenced and walls have been torn down. Home renovations already induce anxiety on normal days, let alone in times of a pandemic. The experience has been a painful one and caused me many sleepless nights.

Now, all I can think of is what will happen to my children if I fall sick.

Without a home to return to, my children and I could only remain in home quarantine in the dark and cramped basement. We didn’t have a car and relied on rides from our friends over the past month. Now, with everyone obediently following social distancing policies, online shopping and using our own two feet are our only options. However, online shopping has become paralysed: earlier today I tried to buy a microwave rice cooker from Amazon that normally offers next day delivery for Prime members. Now, the waiting period is a month. Grocery delivery service like Instacart that normally delivers within an hour now requires orders to be placed two to three days in advance. When the delivery does arrive, there is only about half of the things on my checklist as many items are out of stock. Thankfully, there is a small organic grocery that is a 15-minute walk away from where we live. The kids and I head there every other day to replenish our daily necessities with our face masks on. My seven- and nine-year-old boys have become pretty good at lugging groceries.

I’ve booked our current Airbnb until 3 April although where we would live after that and whether our new house would be ready by then remains uncertain. When I phoned my husband, he said that he believes I can handle anything that comes my way. Despite his confidence in me, I felt even more worried after our conversation. A few weeks ago, I fretted over having just five sets of clothes to wear on rotation. Now, all I can think of is what will happen to my children if I fall sick.

During this time, I find comfort in the fact that I still have a roof over my head — albeit it being a basement — and have the company of my children to keep me going. We are already far better off than the people who’ve been infected, lost their loved ones, or are unable to pay their housing rentals due to widespread unemployment.

Related: Visiting the doctor as a foreigner in China: I wish they will not become complacent | When the narcissists of London and New York meet the coronavirus