As TikTok edges towards its deadline of 15 September to either be sold to a US buyer or banned in the US, it is ironic to think that Bytedance, its parent company, is getting bruised from all sides. Some of its harshest critics, in fact, are intensely patriotic Chinese citizens who think that it has not gone far enough in pushing back on unreasonable US demands. Can ByteDance appease the gods and the hordes before the deadline is up? 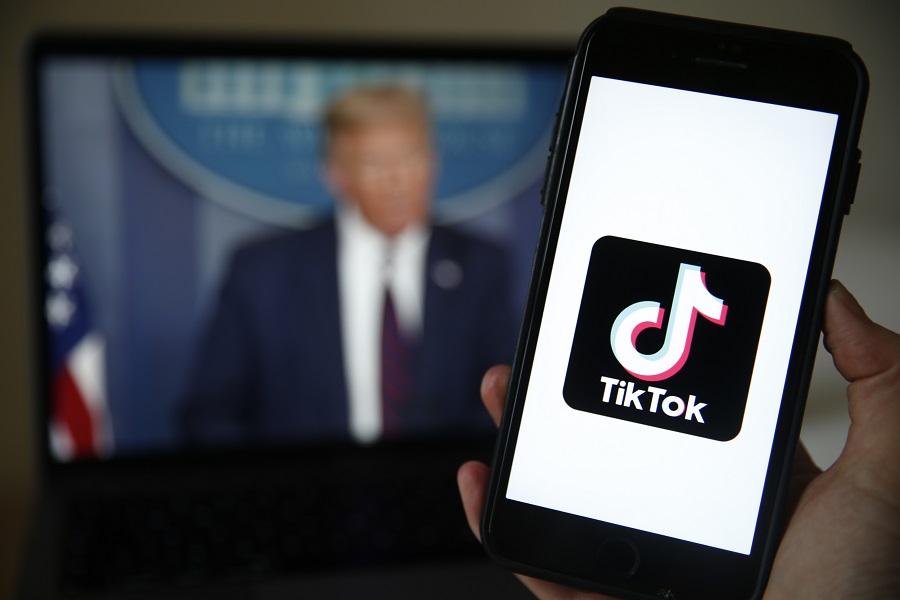 The TikTok logo is displayed in the app store in this photograph in view of a video feed of US President Donald Trump, 3 Aug 2020. (Hollie Adams/Bloomberg)

Grace Chong - 12 May 2022
Teo Han Wue laments that we are not doing enough to remember the remarkable contributions that Singapore’s pioneers of the arts have made. Singapore’s early artists and theatre practitioners were the avant-garde who went beyond the tried and tested in China or elsewhere. If we don’t remember our past achievements, how can we be inspired to produce greater things in the future?
Read more
Translated by Grace Chong on 5 August 2020

The future of TikTok in the US will be decided in 40 days. Following his threat to ban the app in the country, US President Donald Trump suddenly said at a press conference on 3 Aug that he would allow Microsoft to acquire TikTok, which is the international version of Douyin — a video-sharing social networking app from China. However, Trump set 15 September as the deadline for TikTok to find a US buyer, or be shut down for good in the country.

Always the shrewd businessman, Trump added that the US government should get a cut from the sale of TikTok. Regardless of which company acquires it in the end, the US Treasury should get a “very large percentage of that price” because “we're making it possible”. Trump’s request is akin to a landlord collecting rent, or what the Chinese media have described this as “reaping huge profits by hook or by crook”.

Microsoft does not seem to be the White House’s preferred buyer.

TikTok is now like a piece of meat on a chopping block. Observers think that as it is under relentless attack, an acquisition by Microsoft will give it its best chance of survival. Although the acquisition price may be lower than expected, the app can at least continue to be used in the US, where it has amassed a huge following. The app’s parent company ByteDance would also make substantial earnings as a result.

Moreover, while Microsoft is a US company, its founder Bill Gates is a philanthropist who is well recognised and enjoys good reputation in China. Gates has stepped down from Microsoft’s board since early this year, but following the Covid-19 outbreak, he has shown great support for China. Thus, Microsoft should be a buyer that the Chinese can accept.

Microsoft may not be the White House’s top choice

But is it a done deal for Microsoft to acquire TikTok? Based on signals from senior US officials, Microsoft does not seem to be the White House’s preferred buyer.

In an interview with CNN, Peter Navarro, Trump’s assistant and a China hawk, clearly expressed his dissatisfaction with Microsoft’s potential acquisition of TikTok because of the former’s close associations with China.

He said that Microsoft had helped China build its great firewall, and its Bing search engine is effectively an enabler of “Chinese censorship, surveillance and monitoring”. He suggested that Microsoft should “divest its Chinese holdings” and draw a clear line between itself and China if it wants to become the White House’s ideal TikTok buyer.

ByteDance will not let go easily

On the other hand, whether ByteDance would sell TikTok remains an open question. ByteDance founder Zhang Yiming would definitely be reluctant to have his life’s work forcefully removed.

Over the past two days, Zhang sent out two internal letters confirming that TikTok could be forcibly sold or completely banned in the US, and that the company had started talks with a tech company so that the app can continue to be used in the US. However, he emphasised that he disagrees with the decision to sell TikTok’s US business. He also said that a final decision has not been made.

Zhang wrote in the letter on 4 August that the sale of TikTok to a US buyer was not the “goal” of the US. The US’s goal was to ban the app instead.

At the same time that ByteDance was responding ambiguously to a possible acquisition of its TikTok app, there has been news that an international TikTok headquarters would be established in London soon. Zhang could be thinking of alternative solutions and attempting to gain more room for survival in the global market through distancing itself from China.

Chinese netizens have even given him (Zhang Yiming) a political label of being a “精美分子” (jingmei fenzi, lit. someone who is an American at heart).

However, this post-80s ByteDance founder is not just facing a simple business decision. Faced with a strong surge of nationalism in the country, would Zhang be blackmailed into making a decision?

Over the past few days, Zhang has become a victim of cyber bullying as a result of TikTok’s predicament. Not only did Zhang fail to receive unequivocal support from Chinese netizens akin to that Huawei had received in its own debacle, his old Weibo posts in support of the US were dug up and brought to light. Chinese netizens have even given him a political label of being a “精美分子” (jingmei fenzi, lit. someone who is an American at heart).

These criticisms are loaded with strong nationalist and xenophobic emotions. Following Trump’s threats against TikTok, ByteDance has been accused of kowtowing to the US. As Zhang’s letters advocated internationalising the business instead of making strong rebuttals against the US as Chinese netizens would have liked, Zhang was criticised for forgetting his roots and being a traitor. Some netizens blame the US’s increasingly offensive actions on Zhang’s cowardice, while others threaten to delete Douyin in a show of anger.

Some Chinese commentators have thus urged the Chinese government to open up the Chinese market to mainstream international websites such as Google, so as to create a Chinese internet environment that is more open than the US’s.

Owned by a private Chinese internet company, TikTok is seen to have “original sin” in the eyes of people who have their doubts about China. Since “Chinese blood” flows in its body, it is natural that the US and other Western countries would not trust it. Amid China-US competition, it has easily become a target of attack. Furthermore, since it is a business that grew out of the Chinese internet, it has had to adhere to the operating framework laid down by Chinese officials and work according to its demands, including assisting in content reviews and checks.

On the other hand, TikTok’s current predicament is not winning any sympathy from Western elites who truly uphold the ideas of freedom and openness, as international internet companies operating in China have long faced strict and harsh operating conditions. Some Chinese commentators have thus urged the Chinese government to open up the Chinese market to mainstream international websites such as Google, so as to create a Chinese internet environment that is more open than the US’s. They say this will eliminate any credibility that the US has in trying to ban TikTok.

As a Chinese internet company, ByteDance’s achievements have been outstanding. More importantly, it has always insisted on internationalisation. Now, ByteDance, the bearer of “original sin”, and Zhang, the founder of this social media empire, are faced with challenges from inside and out. The next 40 days are worth watching closely as the rescue plan for TikTok, Byte Dance’s baby, becomes clear.