The protests in Iran following the death of 22-year-old Iranian woman Mahsa Amini seem to have put the authorities on the back foot, worsened by the missteps in its responses. The current protests in China have also clearly taken the Chinese government by surprise. Academic Fan Hongda notes that the Chinese authorities can take the example of Iran to see what moves to avoid. 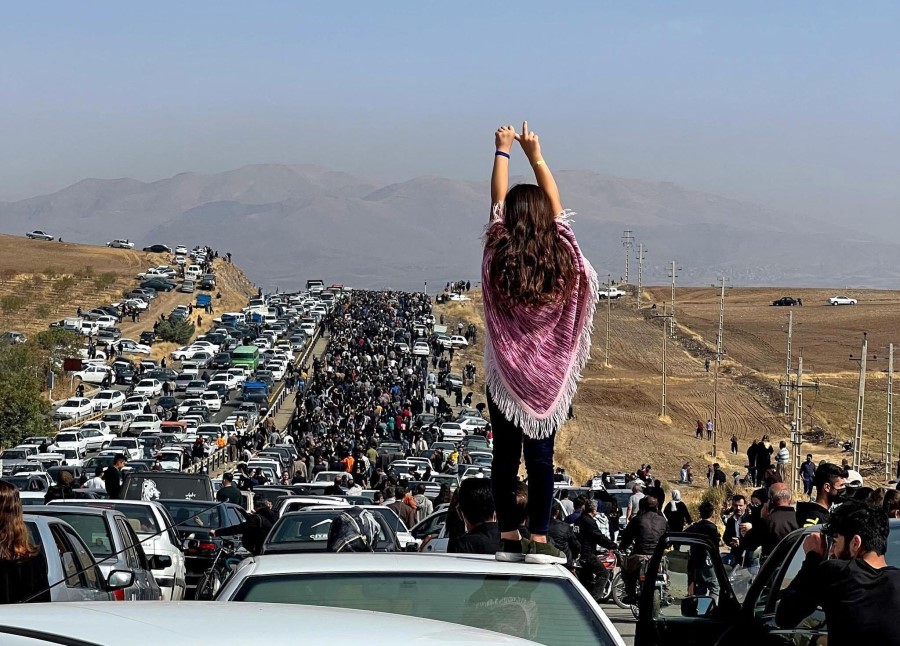 This UGC image posted on Twitter reportedly on 26 October 2022 shows an unveiled woman standing on top of a vehicle as thousands make their way towards Aichi cemetery in Saqez, Mahsa Amini's home town in the western Iranian province of Kurdistan, to mark 40 days since her death, defying heightened security measures as part of a bloody crackdown on women-led protests. (UGC/AFP)

Candice Chan - 30 January 2023
A mall in Shenzhen came under fire for putting up white lanterns with black text as part of its Chinese New Year decorations, while an “ugly” rabbit-shaped light decoration was removed from another mall in Chongqing. Academic Zhang Tiankan muses on tradition and innovation, and the evolution of traditional decorations.
Read more
Translated by Candice Chan on 6 December 2022

As a Chinese academic of Iranian studies, I have recently seen so much gloom, anger, and sorrow among the people of China and Iran. The fresh protests in Iran were sparked by one incident, while the protests in China have built up from the people’s growing discontent with the strict Covid-19 controls and the resulting negative incidents.

In mid-September, a young Iranian woman Mahsa Amini died in the hospital after the “morality police” arrested her due to an issue with her hijab, sparking public protests that are still ongoing.

These protests are a manifestation of the social conflicts in Iran that have built up over the years — while people are objecting to compulsory hijab-wearing for women, they are in fact expressing their strong dissatisfaction with the incompetence of the country’s leadership.

Meanwhile, with more countries easing or lifting Covid-19 controls this year, China has ramped up controls instead. While China’s pandemic control has been outstanding, the damage to the country and its people is becoming increasingly apparent.

With repeated incidents of human casualties related to Covid-19 controls, more and more people are expressing their dissatisfaction in various ways. Aggravated by other factors, China’s social stability is clearly facing a challenge.

Whether in terms of how the country’s regime or government operates, or the type of social security challenges faced, there are similarities between China’s and Iran’s situation, and China can take heed of how things have unfolded in Iran so far.

... the response to Amini’s death was a misstep in not immediately quelling public anger.

Since 2009, public protests have been frequent in Iran. The Iranian authorities may have believed that the protests that started in mid-September were not out of the ordinary, and did not realise that Iran’s internal conflicts have reached new heights.

While the Iranian authorities have taken some measures to appease the protestors, they have not worked as expected. Furthermore, the authorities’ measures were often confrontational.

Firstly, the response to Amini’s death was a misstep in not immediately quelling public anger. Amid swelling public sentiment, the Iranian authorities released a short video clip of Amini standing on her own before collapsing in a detention facility, as proof that she was in poor physical condition before being taken away.

However, Amini’s family denied that she was in poor health, and people were more concerned with what happened in transit before she reached the detention facility and the cause of her injury. Clearly, the Iranian authorities’ response failed to ease the conflict but intensified the people’s dissatisfaction instead.

... the Iranian authorities clamped down on the internet and social media, which caused more uproar among the public as it severely impacted their daily lives, livelihoods and businesses.

Also, Iranians do not have a positive outlook on their future. The Iranian government has yet to release new policies or initiatives aimed at quelling public discontent or focusing on the country’s development. The lack of positive initiatives has also made bystanders more inclined to protest, much to the detriment of Iranian society.

With the growing inter-generational divide between the younger people and the state, social instability will continue to rise if officials do not start to build relevant communication mechanisms.

Lastly, the state lacked an effective dialogue mechanism. In other words, the Iranian government has yet to find a way to communicate with the post-00s generation of young protesters. With the growing inter-generational divide between the younger people and the state, social instability will continue to rise if officials do not start to build relevant communication mechanisms.

To a large extent, China has much to learn from the current situation in Iran, especially in the following aspects:

One, the need to solve longstanding social conflicts and reduce security hazards. As Iranian officials have long ignored the people’s cries, even incidental events could trigger mass protests in the country, as was seen in the Arab Spring in the early 2010s.

While China has developed rapidly for many years, it has also created social problems and conflicts that are not yet resolved. The Chinese government must proactively solve these conflicts to reduce social risks. Addressing social problems and conflicts with crude and repressive measures, or hastily responding only after they have escalated into social crises, will not result in desirable outcomes for the people or the government.

Chinese society has been increasingly unstable, as evidenced by the large numbers of crowd management personnel on the streets.

Two, accountability must be quickly and accurately identified after an incident to effectively resolve social conflicts, as speed and effectiveness are key in crisis management.

Since the outbreak of the Covid-19 pandemic and especially this year, Chinese society has been increasingly unstable, as evidenced by the large numbers of crowd management personnel on the streets. All of China’s major social conflicts and mass gatherings this year can be attributed to the fact that the source of conflict was not dealt with in a timely and effective manner.

Three, the need to think twice before restricting or shutting down the internet in an already highly connected internet era. The situation in Iran shows that while restricting or shutting down the internet is a means for a government to prevent the spread of detrimental information, it will also turn the previously uninformed or uninvolved people against the government, adding to the latter’s challenges.

While the Chinese government has reiterated that stringent anti-Covid measures are put in place to protect the people, many have lost their health or even their lives because of these very measures.

Four, the government should be aware of the gap between policy intention and its outcome, and focus on creating effective communication channels between the authorities and the people. Since the start of the year, Chinese society generally has a declining image of China’s “Big White” army (大白, people in white hazmat suits and in charge of carrying out anti-epidemic measures), who are often seen in viral videos engaging in violent behaviour.

While the Chinese government has reiterated that stringent anti-Covid measures are put in place to protect the people, many have lost their health or even their lives because of these very measures.

How do we strike a balance between policy intention and its outcome? How do we reduce unhappiness among people while implementing protective measures? Why are a growing number of Chinese dissatisfied with current anti-Covid measures? Clearly, an effective communication channel must be built between decision-makers and the people.

This article was first published in Lianhe Zaobao as “伊朗抗议对中国的启示”.