What to expect from the US-ASEAN Summit in Washington

ASEAN leaders will finally meet US President Joe Biden at the long-awaited US-ASEAN summit in Washington. Whether ASEAN and US can find convergence on regional issues, such as Washington’s desire to manage the rise of China, will be a pressing challenge. 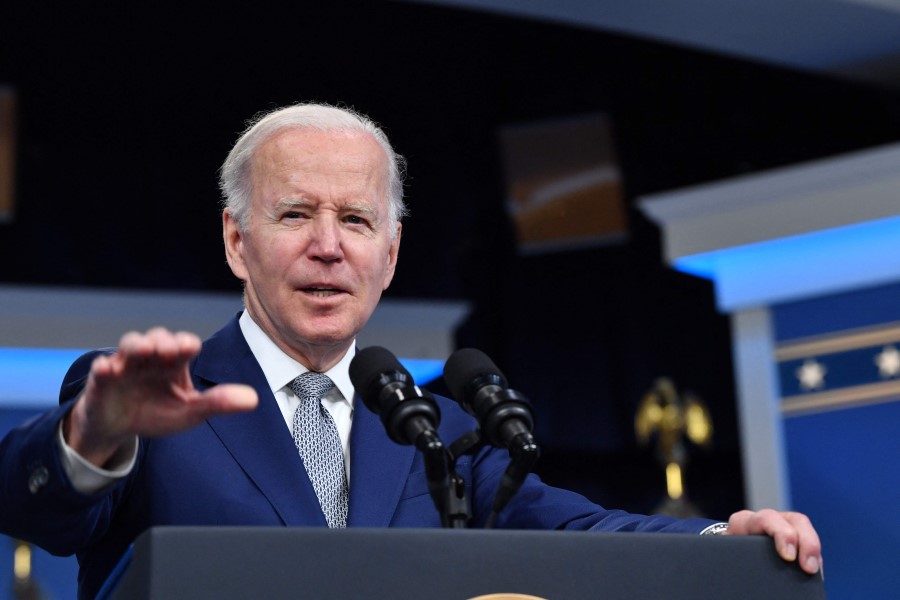 US President Joe Biden speaks at the South Court Auditorium of the White House in Washington, DC, on 10 May 2022. (Nicholas Kamm/AFP)

Candice Chan - 30 November 2022
An incident involving errors with Covid test results at a test facility in Lanzhou has opened the doors to deeper digging by netizens, indicating a pattern of outbreaks wherever there are facilities established under the Shenzhen Nucleus Gene Technology Co. Coincidence, or something else?
Read more
Translated by Candice Chan on 11 May 2022

The leaders of ASEAN will finally meet US President Joe Biden in person for the first time at the White House in Washington on 12-13 May 2022. The Special Summit is much anticipated, following a series of high-level meetings between the US and ASEAN, and bilateral visits to Southeast Asia by senior US officials last year.

The timing cannot be more apt, given intensifying China-US rivalry and geopolitical flux stemming from Russia’s recent invasion of Ukraine. There is much at stake in the Indo-Pacific, including an intensifying China-US rivalry and a myriad of regional challenges such as the war in Ukraine, developments in the South China Sea, and North Korea’s recent provocations. It is also likely that the brewing political crisis in Myanmar will be high on the agenda.

Apart from calling on ASEAN to take a harsher stance on Russia, the US may take the opportunity to lobby Indonesia, Thailand and Cambodia, as the chairs of G20, APEC and the East Asia Summit respectively, to exclude Russia from the multilateral summits in November.

... one would expect the statement to employ the usual shibboleths, ranging from the importance of the 1982 UNCLOS in the South China Sea to urging Myanmar to implement ASEAN’s Five-Point Consensus.

These issues will certainly be reflected in the Joint Vision Statement expected to be released following the summit. Given ASEAN’s history with tendentious issues, however, one would expect the statement to employ the usual shibboleths, ranging from the importance of the 1982 UNCLOS in the South China Sea to urging Myanmar to implement ASEAN’s Five-Point Consensus.

For sure, the summit will signal Washington’s increasing commitment to ASEAN. The US plays a vital role in championing a rules-based order and upholding international law — which regional respondents have affirmed in the State of Southeast Asia 2022 Survey Report.

In terms of the optics, the summit will be important following the ASEAN leaders’ meeting with Russian President Vladimir Putin in October 2021 and Chinese President Xi Jinping in the following month. The postponement of the Special Summit in March freed up the calendars for four ASEAN Foreign Ministers, who were in turn invited by Chinese Foreign Minister Wang Yi to visit China — thus underscoring the intensity of competition between the two major powers in wooing ASEAN.

An important agenda item on the table will be the US’s request for a Comprehensive Strategic Partnership with ASEAN (a status that ASEAN accorded to China and Australia in October last year).

Strengthening relations with allies and partners in Southeast Asia is at the core of Biden’s new US Indo-Pacific strategy, which was released in February this year. This sees the development of a “free” and “open” region, bolstered by strong alliances, partnerships and prosperity as important objectives. While such goals are motherhood and apple pie, it is an open secret that the strategy is a thinly veiled attempt to manage the rise of China.

On this, ASEAN does not see eye-to-eye with the US, especially when ASEAN would like to seek more robust economic engagement with Beijing and its preference for inclusive cooperation. This is where US attempts to gain traction on Indo-Pacific strategy will most likely falter.

An important agenda item on the table will be the US’s request for a Comprehensive Strategic Partnership with ASEAN (a status that ASEAN accorded to China and Australia in October last year). The US will be eager to convince ASEAN that it can match its commitment to a new level of partnership that is meaningful, substantive and mutually beneficial. These conditions are set by ASEAN, although what these criteria constitute remains an enigma.

While there will be strategic convergence between ASEAN and US in the region, there will also be divergence with regard to US approaches to the region, in particular, its goals to counter the rise of China and to build a US-led security order that might undermine ASEAN.

What would be of interest to ASEAN is how the US plans to strengthen its economic leadership in the region via its much-vaunted Indo-Pacific Economic Framework.

It is anticipated that President Biden will elaborate on the US$102 million in new initiatives announced at the virtual US-ASEAN Summit last October, including its support for implementing tangible cooperation under the ASEAN Outlook on the Indo-Pacific.

Practical cooperation between ASEAN and the Quad (which comprises the US, Australia, India and Japan) is likely to be put forward, in areas such as Covid-19 pandemic recovery, promoting stronger economic ties and maritime security, and addressing climate change.

Apart from the summit, special sessions on specific areas such as clean energy transformation and sustainable infrastructure will be held between ASEAN leaders and several state secretaries, including Janet Yellen (Treasury), Peter Buttigieg (Transportation), Jennifer Granholm (Energy) and John Kerry, the special presidential envoy for climate.

What would be of interest to ASEAN is how the US plans to strengthen its economic leadership in the region via its much-vaunted Indo-Pacific Economic Framework. The US has promised to look into new approaches to trade, such as enhancing cooperation in digital economies (including the possibility of a new digital economy framework), advancing resilient and secure supply chains, and working towards decarbonisation and clean energy.

The world will also be watching closely the dynamics of the first ASEAN Summit of the year, co-chaired by Cambodia, which has not been in Washington’s good books.

ASEAN, however, has been sceptical about the real benefits and incentives of the framework, given the lack of market access and the inclusion of clauses on labour and the environment. In addition, ASEAN will not be comfortable if the economic framework becomes a Trojan Horse to counter China, especially if its membership is extended to Taiwan.

The world will also be watching closely the dynamics of the first ASEAN Summit of the year, co-chaired by Cambodia, which has not been in Washington’s good books.

ASEAN leaders will also be short of its full complement of leaders in Washington. Myanmar’s military leader will be absent, given ASEAN’s decision to invite only a non-political representative; President Rodrigo Duterte of the Philippines is also likely to miss the summit, given the country’s recent election. In particular, the presence of a handful of authoritarian leaders in the US capital — the putative paragon of democracy and human rights — might be a highlight in itself.

The summit will underscore US’s strategic role in the region and its growing presence — together with its like-minded allies and partners — in the Indo-Pacific. While there will be strategic convergence between ASEAN and the US in the region, there will also be divergence with regard to US approaches to the region, in particular, its goals to counter the rise of China and build a US-led security order that might undermine ASEAN.

China has cautioned that such US-led minilateral groupings are akin to an “Asia Pacific version of NATO”. It has counter-proposed its Global Security Initiative at the recent Boao Forum for Asia focusing on principles such as indivisible security. It is to ASEAN’s advantage that it is being courted by the major powers; at the same time, the dilemma of choice (and non-choice) has only become more pressing.

Related: ASEAN’s deft diplomacy with its dialogue partners | ASEAN-China relations stay robust despite Myanmar's absence from virtual summit | America's coming back — but ASEAN will cope, with or without her | Japanese academic: US moving away from ASEAN centrality to defend its regional interests | 2022 State of Southeast Asia survey: Diverse perspectives and hard realities