What would Lee Kuan Yew make of the China-US trade war?

Mr Lee Kuan Yew may have passed on, but his views survive. What might he have thought about the current China-US trade war? Zhu Ying looks at Mr Lee’s comments about China and the US for some clues. 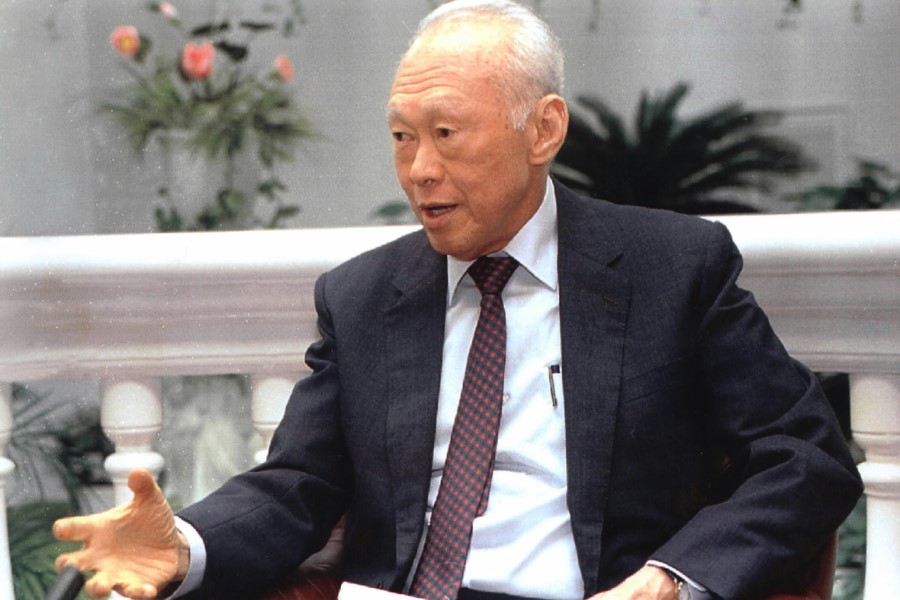 Mr Lee Kuan Yew left behind many incisive comments about China and the US. (SPH)

Candice Chan - 23 February 2021
Commentator David Ng explores the changes that are happening in China with developments in technology that allow vast changes in business models, from traditional offline transactions to online business, and “new retail”, which combines the two. How will the Chinese economy grow under these forces?
Read more

Candice Chan - 23 February 2021
The State of Southeast Asia 2021 survey published by the ASEAN Studies Centre at ISEAS-Yusof Ishak Institute indicates that Southeast Asians’ trust in China continues to trend downward. China’s success in containing the pandemic domestically, and its "pandemic diplomacy” in the region have had little effect on Southeast Asians' trust deficit towards Beijing, as they are anxious over China’s ability to constrain their countries’ sovereignty and foreign policy choices. ISEAS academic Hoang Thi Ha notes that this trust deficit undermines China’s “discourse power”, and Beijing would do well to consider recalibrating its approach to the region.
Read more
Translated by Candice Chan on 13 January 2020

The late Mr Lee Kuan Yew was known as a great strategist. Much of what he knew of the world has proven to be objective, accurate, and highly incisive. Mr Lee had nothing to do with the China-US trade war, but the views he left behind on China, the US, and China-US relations —  captured in Lee Kuan Yew: The Grand Master’s Insights on China, the United States, and the World by Graham Allison and Robert D. Blackwill — are very helpful for understanding the trade war. The quotes in this article are taken from this book, unless otherwise stated.

Professor Allison of Harvard University is the original proponent of the “Thucydides Trap” which says that the tussle between an emergent and incumbent hegemon often leads to war. His book Destined for War: Can America and China Escape Thucydides's Trap? is a current must-read on China-US relations. In a 2015 interview with China Youth Daily, Allison said of Mr Lee: “When we interviewed him (in 2011), he was nearly 90. He was a little weak, but his mind was clear and sharp as a laser.” Clear and sharp enough to make the following points.

“China is not going to become a liberal democracy; if it did, it would collapse. Of that, I am quite sure…”

First, Western countries have unrealistic fantasies about China. Mr Lee noted: “China is not going to become a liberal democracy; if it did, it would collapse. Of that, I am quite sure…” Since the trade war began, both the hawks and doves in the US have been unanimous in expressing disappointment with China, because they do not see China’s market economy moving towards Western-style democracy. But for Mr Lee, America’s fantasies about China only show that Americans do not understand China, and have created an imagined China based on their own knowledge. And America’s wrong ideas about China will lead to erroneous policies.

In the process of the trade war, the US government has not stopped imposing its own will on China. And with what results? Mr Lee had this to say: “I do not believe you can impose on other countries standards which are alien and totally disconnected with their past.” All of the US government’s impositions on China are in line with Western standards, and China definitely will not accept everything. A report by Radio France Internationale (RFI) mentioned that Deutschlandradio (DLR) said the policies of the West towards China show that the West is riding a dragon, but at the same time, the West has to realise that it is not in control of where the dragon is going.

Second, exaggerating China’s strength provides a basis for the “China threat” argument. China’s communications giant Huawei is a core issue in the trade war, and a basis for exaggerating the China threat. However, China and the West have different assessments of Huawei’s technology. We do not see Americans saying that Huawei is a leader in 5G technology, and therefore it is a threat to the US; on the contrary, the media in mainland China constantly talks about how Huawei is leading in 5G technology, therefore the US is blocking it. But the truth is that Huawei is only a leader in certain 5G technologies, and it is still heavily dependent on the US for its chips.

And what was Mr Lee’s assessment of China’s capabilities? He said: “China will inevitably catch up to the US in absolute GDP. But its creativity may never match America’s, because its culture does not permit a free exchange and contest of ideas.” Mr Lee’s views completely match those featured in a programme called Chinese Culture is Not Conducive for Technology, aired over 10 years ago on Shanghai Television, where economist and commentator Larry Lang Hsien-ping said firmly that the Chinese are not innovative.

... the Four New Inventions (high-speed rail, mobile payment, bike-sharing, and e-commerce) are examples of how China is an “innovation sponge”.

So, does China’s culture support innovation? In the 1980s, historian and sinologist Joseph Needham asked why, given that China was previously far ahead of other civilisations in science and technology, was it not ahead of the rest of the world? And in 2005, Chinese mathematician and physicist Qian Xuesen questioned why China’s schools have not been able to cultivate outstanding talents whose academic achievements match the greats from the time of the Republic of China (1912-1949). The Needham Puzzle and Qian’s question constantly prick the sensitivities of the Chinese.

Are Mr Lee’s views accurate? At the moment, at least, in the past few centuries, we have not seen any wave of significantly influential technological innovations from China itself. In 2015, McKinsey & Company described China as an “innovation sponge”, absorbing and adapting technology, best practices, and knowledge from all over the world. Indeed, when it comes to showing China’s innovation achievements, the Four New Inventions (high-speed rail, mobile payment, bike-sharing, and e-commerce) are examples of how China is an “innovation sponge”. And in 2018, Peking University’s Michael Pettis said the US need not worry that China will dominate the high-tech industries of the future, because China lacks a climate of innovation.

Without the right climate, no amount of money will buy innovation. In 2018, China spent 1.97 trillion RMB (US$275 billion) on research and development, second only to the US, but at a far higher growth rate. Between 2000 and 2016, China’s R&D spending grew by an average of 20% per year, about five times America’s spending growth over the same period. And from 2008 to 2017, China spent about US$185.2 billion on buying overseas intellectual property rights, while earning US$12.2 billion in selling IP rights overseas. So, although China has seen some achievements in innovation, it still lags behind developed economies.

As long as its economy leads the world, and America stays ahead in innovation and technology, neither the European Union nor Japan nor China can displace the United States from its present pre-eminent position.

Third, a correct understanding of the US is necessary for a correct handling of China-US relations. Mr Lee made many accurate comments about the US. He said: “The US is going through a bumpy patch with its debt and deficits, but I have no doubt that America will not be reduced to second-rate status. Historically, the US has demonstrated a great capacity for renewal and revival.” Mr Lee also gave ample recognition to the US’s innovation capabilities, and the US economy’s performance since the 2008 financial crisis has proven his comments above to be correct.

There will always be some people in China who depict the trade war as a war against China, because the US has declined and lost its confidence and is starting a trade war against the world’s number two as predicted in the Thucydides Trap. However, Graham Allison feels that there are also cases where the Thucydides Trap has not been proven right. The US is comparatively weaker than before, but not completely weakened, as some people seem to suggest.

But here are some quotes showing Mr Lee’s assessment of the US:

“They have the superior system. It is more competitive.”

“The Americans will always have the advantage because of their all-embracive society...”

“The US is the only superpower because of its advances in science and technology and their contribution to its economic and military might.”

“The United States is the most benign of all the great powers, certainly less heavy-handed than any emerging great power… As long as its economy leads the world, and America stays ahead in innovation and technology, neither the European Union nor Japan nor China can displace the United States from its present pre-eminent position.”

Mr Lee has provided much food for thought in the China-US trade war. But China should not do what Global Times editor-in-chief Hu Xijin tweeted on 8 August 2019: “China is mobilizing internally to fight firmly with the US...” Chinese president Xi Jinping has also called Mr Lee “our senior who has our respect”. Hopefully the people of China will keep their heads and listen to what Mr Lee said.