When 'new Hong Kongers' run the show, where do the old ones go?

It is clear that the Beijing government wants to have more say in the governance of Hong Kong, not least with the recent passing of the bill to change Hong Kong’s electoral system allowing more new migrants from mainland China to be part of the Election Committee. Zaobao journalist Tai Hing Shing charts the rise of these “new migrants” in Hong Kong and the political force they are becoming. How will their increasing assertiveness affect the dynamics between the new and old migrants, as well as the locals? Candice Chan - 17 March 2021
Social media movements such as the Milk Tea Alliance are tapping into discontent with the regional decline of democracy and fears about the rise of China as a hegemonic power. ISEAS visiting fellow Quinton Temby explains why anti-China sentiments are gaining traction and how it is affecting local politics.
Read more China must understand the 'tragedy complex' of Biden's team

Candice Chan - 17 March 2021
Understanding the psyche of Biden’s team will help China in its strategic calculations. First of all, members of Biden’s inner circle are different from the hawkish officials in the Trump administration, but they do have a “tragedy complex” that could leave them expecting the worst to happen. Could the upcoming China-US dialogue in Alaska be a first step towards re-orienting bilateral relations? Switzerland-based academic Xiang Lanxin takes a look at the factors at play.
Read more 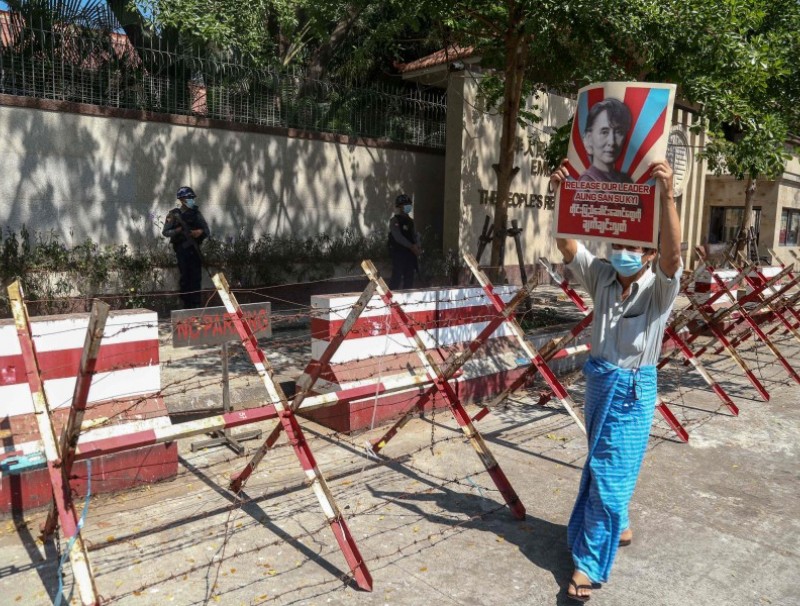 Candice Chan - 16 March 2021
Zaobao journalist Tai Hing Shing notes that mainland Chinese companies in Hong Kong, Yangon and elsewhere often find themselves targets of attack. Why are they so unpopular in the very communities they seek to bring greater economic activity to? Perhaps they are expanding too much, too soon and too fast, giving little opportunities for locals to adapt. But their work cultures probably also play a big role.
Read more When even blue skies are political in China

Candice Chan - 16 March 2021
Chinese academic Ma Liang says it may be more worth it for the Chinese government to focus on long-term improvement of China’s air quality, rather than spending money and effort on clearing its skies only when there are major events. The government seems to be hoisting in this rationale, judging by the naturally grey skies during the Two Sessions this year. Can blue skies every day be a reality for Beijing in the near future?
Read more Will China take Taiwan by force within six years? Taiwanese think not and experts are worried

Candice Chan - 11 March 2021
At a recent US senate hearing, Admiral Philip Davidson, commander of the US Indo-Pacific Command, assessed US capabilities in the Indo-Pacific, adding that Beijing may invade Taiwan in the next six years. Zaobao correspondent Woon Wei Jong speaks to Taiwan academics about the issue.
Read more
Translated by Candice Chan on 7 April 2021

Late last month, the mainland Chinese government passed a bill to change Hong Kong’s electoral system, with one of the main points being an overhaul of the Election Committee. Apart from changes to the weight given to financial magnates, the “green light” has been given to allow more new migrants from mainland China to be part of the Election Committee, and these “new Hong Kongers” coming up in Hong Kong’s political arena have led to hot debate.

Looking at history, this sudden emergence of mainland Chinese migrants in Hong Kong is not surprising. From the start, Hong Kong has taken in many new migrants from everywhere, such as the refugees who fled the famine in mainland China in the 1940s and 1950s. Many of them worked hard to become prominent members of society, influencing Hong Kong’s political and financial sectors.

However, there are some differences between the old and new migrants. Previously, most of the mainland Chinese who migrated to Hong Kong were from the lower rungs of society, but many of those who have come in recent years are well-educated elites or the rich. Given their different backgrounds, each group also has a different attitude towards integrating into Hong Kong.

As for the minority of mainland Chinese migrants who did not want to integrate in Hong Kong, they chose to stay in their enclaves and lead simple, monotonous lives. Many of my friends’ grandparents were like that. The language, social systems, and way of life that they knew did not click with Hong Kong’s model. Their everyday route was between their home and the market, and they became marginalised.

In the academic sense, the former situation is more of a “melting pot”, while the latter is a “salad bowl”, where one maintains their own identity outside of mainstream society. Generally, while the older generation of new migrants from mainland China did face indirect discrimination in Hong Kong, they still got along in peace with the locals.

However, with the rapid increase in the number of mainland Chinese moving south to Hong Kong in recent years, coupled with China’s rise, there has been an obvious change in the profile of new migrants.

At the same time, with the continued influx of new migrants, in recent years there has been intense competition between the new Hong Kongers and locals in terms of jobs, resource allocation, and activity space.

Looking at some new migrant friends that I know from mainland China, they are all smart and talented, and are prominent people of status in their fields, especially finance and other professional sectors. Seeing Hong Kong’s waning economic strength, many are unwilling to integrate, and they interact most frequently with other friends from mainland China while keeping a distance from “old” Hong Kongers, forming a new group of “new Hong Kongers” over time.

At the same time, with the continued influx of new migrants, in recent years there has been intense competition between the new Hong Kongers and locals in terms of jobs, resource allocation, and activity space. In some cases, new migrants have even taken over control, leading to an identity crisis among many locals, with a rise in localism over the past ten years and occasional incidents of discrimination and attacks on mainland China migrants.

But speaking of a watershed moment in Hong Kong’s focus on new Hong Kongers, one has to mention 2013. In October of that year, the overseas edition of Chinese Communist Party (CCP) newspaper People’s Daily tagged mainland Chinese who settled in Hong Kong as “new Hong Kongers”, and said they were necessary for Hong Kong’s growth, which drew a huge social reaction.

Some time ago, a group of pro-Beijing financial executives in Hong Kong announced the establishment of the new Bauhinia Party, targeting 250,000 members to become a new political party to represent Hong Kongers’ interests, in a further show of the growing influence of this group in Hong Kong.

Where there is “new”, there is “old”. And when Hong Kong is full of new Hong Kongers, where do locals and old migrants go?

To be fair, with their increasing numbers and influence, it is normal for new Hong Kongers to speak up and bring up their rights and interests. In particular, during the anti-extradition bill movement in 2019, many new migrants from the mainland faced serious threats to their personal safety, and many new Hong Kongers who had settled down with their families in Hong Kong could not take it any more and felt they could no longer stay silent.

But for the Beijing authorities, perhaps they should also be very careful in handling the question of new Hong Kongers taking over the governance of Hong Kong. Where there is “new”, there is “old”. And when Hong Kong is full of new Hong Kongers, where do locals and old migrants go? Simply dividing people into new and old migrants will only divide society even more. In the long term, having migrants old and new as well as locals getting along peacefully and working together to contribute to society — that would be the way for Hong Kong.

Related: Overhaul of Hong Kong's electoral system: Is it still 'one country, two systems'? | Hong Kong must be governed by 'patriots'. So who are the ‘patriots’? | Will it be 'one country, one system' for Hong Kong? | Do artworks need to be patriotic? Hong Kong politicians fight over Ai Weiwei's 'middle finger photograph'