The US’s “strategic ambiguity” on the Taiwan Strait issue comes to question as China-US relations deteriorate. Political commentator Jin Jian Guo notes that the US has said on multiple occasions that it is ready to militarily defend Taiwan, while China has spoken against any intervention from the West. Will the US change its “one China” policy and move towards strategic clarity? 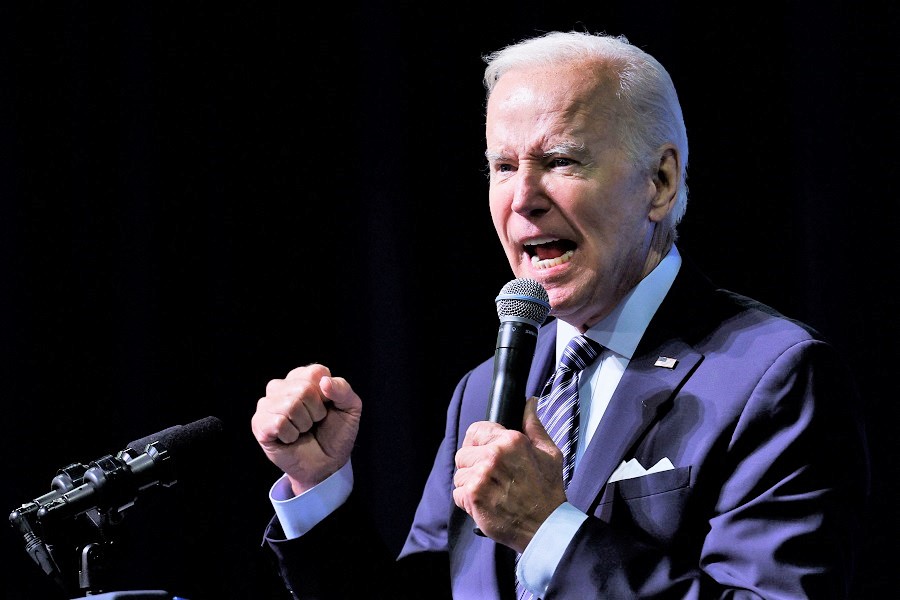 US President Joe Biden gestures as he delivers remarks at a reception for the Democratic National Committee in National Harbor, Maryland, US, 8 September 2022. (Evelyn Hockstein/Reuters)

Grace Chong - 25 November 2022
China’s resurgence of Covid-19 infections has widened the gap between the young workers opposed to the tightening of controls, and the older generation that feel safer with strict measures in place. Given that the elderly make up a high proportion of the Chinese population, Chinese authorities seem to be holding fast to the dynamic-zero policy. Zaobao correspondent Wong Siew Fong tells us more.
Read more
Translated by Grace Chong on 4 October 2022

The Russia-Ukraine war has worsened the already deteriorating US-China relationship, leading to significant changes in the US’s Taiwan policy. These changes are manifested in two ways.

Firstly, the US has repeatedly deterred the mainland’s military actions against Taiwan, while its intention to militarily defend Taiwan has also become increasingly clear.

Since the outbreak of the Russia-Ukraine war, the US government has reiterated that China must not assist Russia or invade Taiwan. During a meeting at the White House with Singapore Prime Minister Lee Hsien Loong on 29 March, US President Joe Biden said that, while the US is dealing with a crisis in Europe, the country remains increasingly focused on an Indo-Pacific strategy in the Asia-Pacific region.

During a hearing with the House of Representatives Foreign Affairs Committee on 6 April, US Deputy Secretary of State Wendy Sherman said that she hopes Beijing will “take away the right lessons” from Russia’s invasion of Ukraine, and understand that any moves by the mainland to take Taiwan by force will “see a response from the international community”.

US national security adviser Jake Sullivan also said on 14 April that the US will “take every step we possibly can” to ensure that the mainland does not invade Taiwan. However, he did not reveal exactly how the US will respond if China really does so.

During an interview with CBS News on 18 September, Biden clearly said that the US forces will defend Taiwan if “there was an unprecedented attack”. He added that the US is “not encouraging [Taiwan] being independent” as they make “their own judgments about their independence”.

This is the fourth time Biden said the US would help defend Taiwan. The previous time he made such a commitment was on 23 May at a joint news conference with Japanese Prime Minister Fumio Kishida.

On 19 September, US Secretary of the Air Force Frank Kendall III backed Biden, saying that Russia’s outrageous invasion of Ukraine should make Beijing think twice about invading Taiwan, and China would be making an “enormous mistake” if it decides to do so.

Why is Biden making it increasingly clear that US forces will defend Taiwan? This is because the Russia-Ukraine war has taught him a lesson.

Prior to the war in Ukraine, Biden had repeatedly tried to dissuade Russian President Vladimir Putin from invading Ukraine after receiving intelligence about a possible invasion. However, he also said that the US will not deploy troops to assist Ukraine.

Putin misjudged the situation and boldly attacked Ukraine. While it is impossible for Russia to win, the US has already spent over US$15 billion in military aid to Ukraine, and some of its weapons stockpiles are already running low.

Similarly, Biden is well aware that China would be encouraged to invade Taiwan if Beijing believed that the US will not intervene militarily given its “strategic ambiguity”, along with the idea of a declining West and a rising East.

The Biden administration’s clear Taiwan policy has led more people to believe that the US’s determination to militarily defend Taiwan is not empty talk.

Preventing war in the Taiwan Strait would surely work better than rescuing the situation after a war breaks out. At the very least, it would save the US tens of billions of dollars and save the people of Taiwan. Hence, it is important that the US must clearly profess to the Chinese leaders that “strategic ambiguity” no longer exists.

The Biden administration’s clear Taiwan policy has led more people to believe that the US’s determination to militarily defend Taiwan is not empty talk. A survey by the Center for Strategic and International Studies released on 19 September showed that 100% of the experts polled believe that China already assumes the US will intervene militarily to defend Taiwan, on top of providing political and economic aids.

Think tank Chicago Council on Global Affairs’ survey released on 11 August also showed that if China invaded Taiwan, 76% of Americans support imposing diplomatic and economic sanctions on China; 65% support sending additional arms and military supplies to Taiwan; and 62% support the deployment of the US Navy to prevent Beijing from imposing a blockade against Taiwan.

Taiwan’s international status increased and more Western countries were willing to speak up for it to join the World Health Assembly...

Secondly, the US is working with Western countries to raise Taiwan’s international status.

During the pandemic in 2020, relations between China and the West deteriorated. China strongly advocated the superiority of a socialist system and mocked the West for not being able to “copy” China’s success against the pandemic, while "wolf warrior diplomacy" ran rampant — all of which prompted Western distaste towards China.

At this time, Taiwan’s international status increased and more Western countries were willing to speak up for it to join the World Health Assembly, mainly because Taiwan’s approach to the pandemic was acceptable to the West.

While US House Speaker Nancy Pelosi’s visit to Taiwan should be seen as a provocation by a key US politician, it is also a test of the reactions of China, the US and other key players to the Taiwan Strait issue, and whether the Taiwan issue will be internationalised. Biden has opposed unilateral actions to change the status quo and damage the peace in the Taiwan Strait, while China has declared that it is “ready to meet the challenge”.

In a conversation with Biden, Xi said, “Those who play with fire will be burned. I hope the US can clearly see this.” Subsequent events revealed that China has no plan to use force against Taiwan yet, while the US will not take lightly any military action by the People’s Liberation Army (PLA). Furthermore, major Western countries are now involved in the Taiwan issue.

There has also been news of visits to Taiwan in October by the chair of Canada’s Standing Committee on International Trade and a delegation from the Canadian parliament, as well as Germany’s Berlin-Taipei Parliamentary Circle of Friends and its human rights commission. The British House of Commons Foreign Affairs Committee plans to visit in November or December, while Denmark’s six parliamentary parties have said that they are preparing to visit after the elections in autumn. (N.B. According to news agencies, six German parliamentarians arrived in Taiwan on 2 October for a five-day visit that will include meetings with Taiwan President Tsai Ing-wen, Vice-President Lai Ching-te, Foreign Minister Joseph Wu and parliamentary speaker, You Si-kun.)

As for the PLA firing missiles, other than criticisms from the US and Japan, German Foreign Minister Annalena Baerbock also criticised China’s threatening posture towards Taiwan. High Representative of the European Union for Foreign Affairs and Security Policy Josep Borrell expressed deep concern over the missile firing, while the French foreign ministry said that Pelosi’s Taiwan visit should not be an excuse for China to escalate tensions.

The G7 foreign ministers and High Representative of the EU for Foreign Affairs and Security Policy released a joint statement calling for China not to unilaterally change the status quo in the region by force, while the British foreign secretary urged NATO to help Taiwan defend itself.

Arms sales under the US’s Taiwan policy remains unchanged, and is in fact improving in quality. In 2022, the Biden administration engaged in five rounds of arms sales to Taiwan, with the most recent one in September worth US$1.1 billion.

Besides military assistance, the US is also helping to train Taiwan troops and most importantly equipping them with the US tactical concepts — the information war is playing an increasing role for the Taiwanese army. Indeed, a key factor for the Russian army’s losses in Ukraine is its incredibly backward tactical thinking.

Following Pelosi’s visit to Taiwan, the US has twice sent military vessels through the Taiwan Strait. The US is disregarding the PLA’s military exercises and the notion that the Taiwan Strait is not international waters. The war in Ukraine shows that the quantity of military equipment is not a deciding factor for victory, as missiles, aircraft and vessels supported by information technology can be disproportionately more powerful.

... the Taiwan Relations Act takes precedence in the "one China" policy, and provides a legal basis for the US to defend Taiwan.

He said, “The United States remains committed to our 'one China' policy, which is guided by the Taiwan Relations Act, the three Joint Communiques, and the Six Assurances. We oppose any unilateral changes to the status quo from either side; we do not support Taiwan independence; and we expect cross-strait differences to be resolved by peaceful means.” Hence, the Taiwan Relations Act takes precedence in the "one China" policy, and provides a legal basis for the US to defend Taiwan.

The US’s "one China" policy is shifting towards strategic clarity. At the United Nations General Assembly Biden repeated that the US does not seek conflict or cold war with China, which are definitely the most sincere words from the US right now. War is a long-outdated solution for disputes, and the best way to resolve the Taiwan issue is still the path of peace.

Related: Five big questions about Nancy Pelosi’s Taiwan visit | Why Taiwan is not Ukraine | Lessons from Ukraine: Is it time to give up strategic ambiguity in the Taiwan Strait? | Will China be emboldened by Russia's invasion of Ukraine?