China was among the fastest in vaccine development, but its progress in actual vaccinations has not been satisfactory. In this “second season” coronavirus fight to recover economically and reopen borders, vaccinations will be key. Will China resort to the crude measures it used in the early stages of the pandemic fight to increase its vaccination rates? Zaobao correspondent Yang Danxu reports. 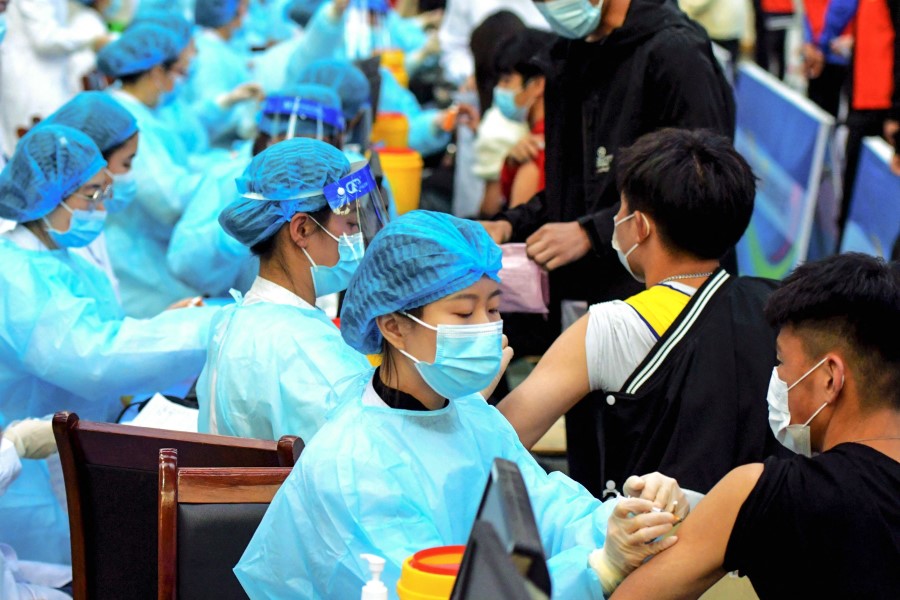 This photo taken on 30 March 2021 shows a medical staff member (centre) administering a dose of the Sinovac Covid-19 coronavirus vaccine at a university in Qingdao in China's eastern Shandong province. (STR/AFP) 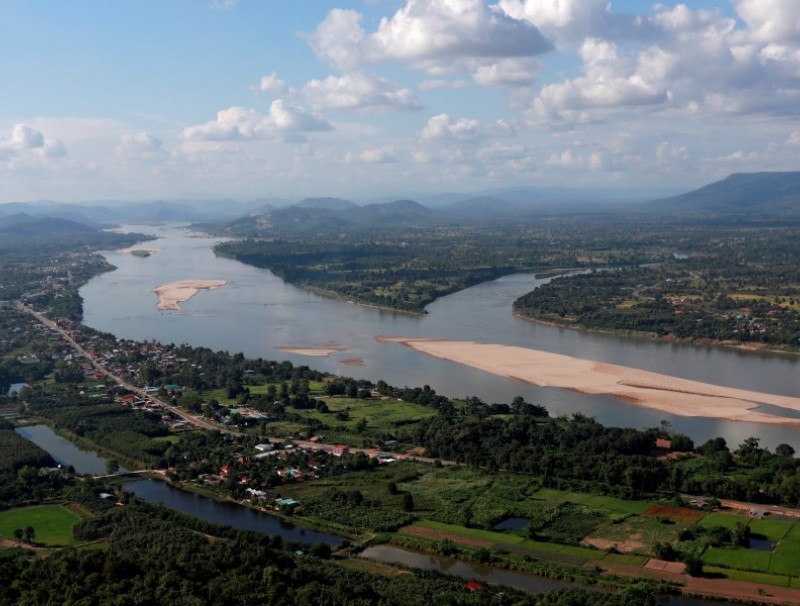 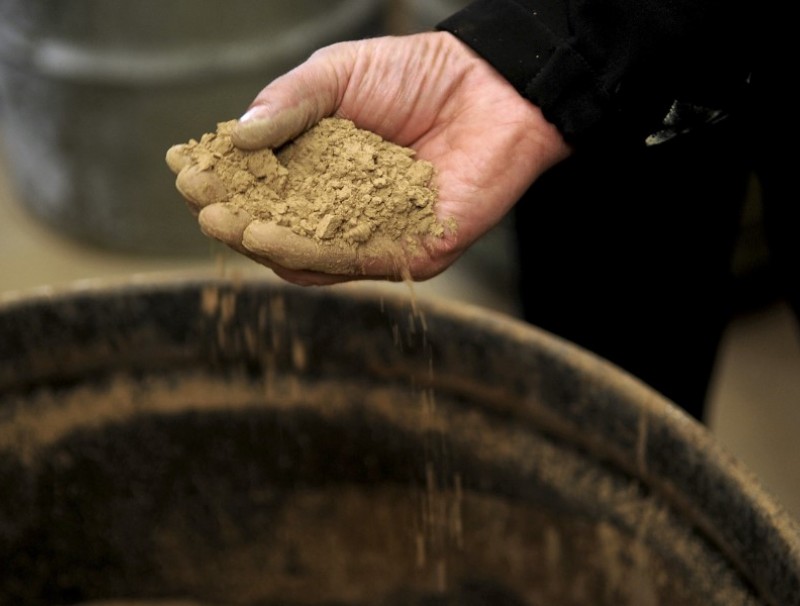 Candice Chan - 3 March 2021
Chinese academic Yu Zhi notes that both the US and China need to align their domestic and foreign policies. The US needs to get the coronavirus pandemic under control and prove that a democratic system still works and that the US is still a leader in universal values. China, on the other hand, needs to take a more market-oriented approach to economic and industrial development and show that its respect for global diversity extends domestically as well.
Read more
Translated by Candice Chan on 7 April 2021

A mysteriously addictive publicity slogan for vaccinations has recently gone viral on China’s short video platforms. A community in Yantian, Shenzhen, was the first to come up with the slogan that plays on the words of Call Like a Cat (《学猫叫》), a popular song from two or three years ago that includes the line: “Let’s call like a cat, meow!” (NB: The Chinese words for “meow” (喵) and “vaccine” (疫苗, yimiao) have the same pronunciation “miao”.)

Someone turned the catchy song into one promoting vaccines, and at least one hospital has got its healthcare staff to dance to the music to encourage the public to get vaccinated. The cute and heartwarming music sticks in the brain like an effective brainwashing technique.

... as of 5 April, a total of nearly 143 million vaccination doses have been administered throughout China, and the current vaccination rate is still quite far from the 80% threshold required for herd immunity...

Many slogans have come up all over China: “Let’s get vaccinated; the epidemic will get eradicated”; “Everyone has the miao miao; let me give you a miao miao”; “Lend me your arm; let’s build herd immunity”. The variations are many.

Figures from China’s National Health Commission show that as of 5 April, a total of nearly 143 million vaccination doses have been administered throughout China, and the current vaccination rate is still quite far from the 80% threshold required for herd immunity, and is still a distance from the authorities’ target of vaccinating 40% of the population by the end of June.

In comparison, since quickly starting vaccinations at the end of last year, Europe and the US have made faster progress than China. Looking at the US, figures from Johns Hopkins University show that nearly 18% of people in the US have been vaccinated.

Due to its poor initial handling of the outbreak, some people in the US are already naturally immune. And with rapid vaccination, the US is nearing the goal of herd immunity. Last month, the Biden administration announced that there will be sufficient vaccines for all adult Americans by the end of May, two months ahead of the previous timeline.

At the moment, it looks like building up herd immunity is the only way to end the rampage of the coronavirus. Every country hopes the vaccine can create the conditions to go back to pre-pandemic economic activity and open borders, and the speed of vaccinations may well be a key factor in determining the next phase of economic growth.

China’s success in containing the pandemic has instead become the biggest obstacle in improving the take-up rate of the vaccine, because people do not have the urgency or motivation to get vaccinated.

Economic recovery and re-opening of borders may be delayed

Tommy Xie, head of Greater China Research at OCBC Bank, said at a forum on 5 April that the impact of vaccination rates is not yet apparent, but by the second half of this year, countries that are faster at vaccinations such as the US and UK may also take the lead in opening up their borders and economic activity, and vaccination progress will also be a factor in China’s economic growth this year.

In this “second season” fight against the Covid-19 pandemic for which vaccination is the main strategy, China is not at an advantage. It is no mean feat to vaccinate 70% to 80% of China’s massive population. Analyses have also pointed out that the greatest bottleneck in China rolling out vaccinations across the population does not lie in the supply of vaccines, but in people’s willingness to get vaccinated. China’s success in containing the pandemic has instead become the biggest obstacle in improving the take-up rate of the vaccine, because people do not have the urgency or motivation to get vaccinated.

My friends and I talked about vaccinations at a gathering during the Qingming Festival holidays. Most people are still most worried about the vaccine’s side effects. Many of my friends blurted out, “The pandemic is non-existent in the country. Why the need to go get poked by a needle?”

To increase the country’s vaccination rate, a massive vaccination campaign has been underway in various regions across China since the end of March. Apart from the numerous slogans aforementioned, some regions have resorted to giving out incentives such as eggs and flour to motivate people to get vaccinated. Certain regions are even giving out 100 RMB (roughly S$20) vouchers to each person for each shot that they take.

A civil servant I am familiar with told me that improving the vaccination rate has become a grassroots “political task”, and various regions are in competition in that regard. Recently, “red-headed documents” (红头文件, official documents with the name of the issuing government agency printed in red at the top) of certain regions have come to light on the internet, quantifying the progress of various regions’ vaccination mission and directing that vaccinations be completed through various means such as supervision, guidance, assessment and interviews.

Chinese state media also exposed various “simple and crude approaches” used to push people to get vaccinated: some schools have tied vaccination to students’ graduation and teachers’ performance appraisal; certain local governments intervened in private companies’ operations to expedite corporate vaccinations; and some institutions have even ignored the state of employees’ personal health, mandating that all staff get vaccinated.

A notice released a while ago by Wancheng town in Hainan’s Wanning City listed five consequences of not getting vaccinated. Some of these include being banned from taking public transport; being blacklisted and unable to enjoy the government’s welfare policies; affecting their children’s education, work, enlistment, application for house construction, and so on. Following a public furore over the notice, the local government ultimately made a public apology.

This round of mass vaccination mobilisation reminds one of the initial stages of the coronavirus outbreak when the entire Chinese nation engaged in a herculean fight against the pandemic. During that period, numerous hilarious and embarrassing situations occurred. There were also instances of overcompensated formalism and extreme crude approaches being taken. Ultimately, the nation’s strong grassroots mobilisation ability and the people's willingness to sacrifice their freedom and to put up with inconvenience saw China winning the first round of battling against the pandemic.

Now, the global fight against Covid-19 has entered the “vaccine era”. China is calling its people to “meow” (喵, i.e. miao 苗 (get vaccinated)). In this round of vaccine mobilisation, the world may get to witness yet again China’s style of bringing all its power to bear on accomplishing big tasks. This time round, it’s probably not surprising any more.

Related: Vaccine politics: Can one take a US-made vaccine after taking a China-made one? | Vaccine diplomacy: China and India push ahead to supply vaccines to developing countries | Chinese city offers trial coronavirus vaccine and people are queueing for it | Chinese, American and European vaccines — will we have the luxury of choice?

Society
When 'new Hong Kongers' run the show, where do the old ones go?