Talks on the China-EU investment deal were concluded on 30 December 2020, lending fresh impetus to China’s further opening up to the world. However, the response so far, both externally and internally, seems to be lukewarm to the idea of what some call China’s third opening up. Zaobao associate editor Han Yong Hong ponders why this is so and analyses where China is likely to go from here. 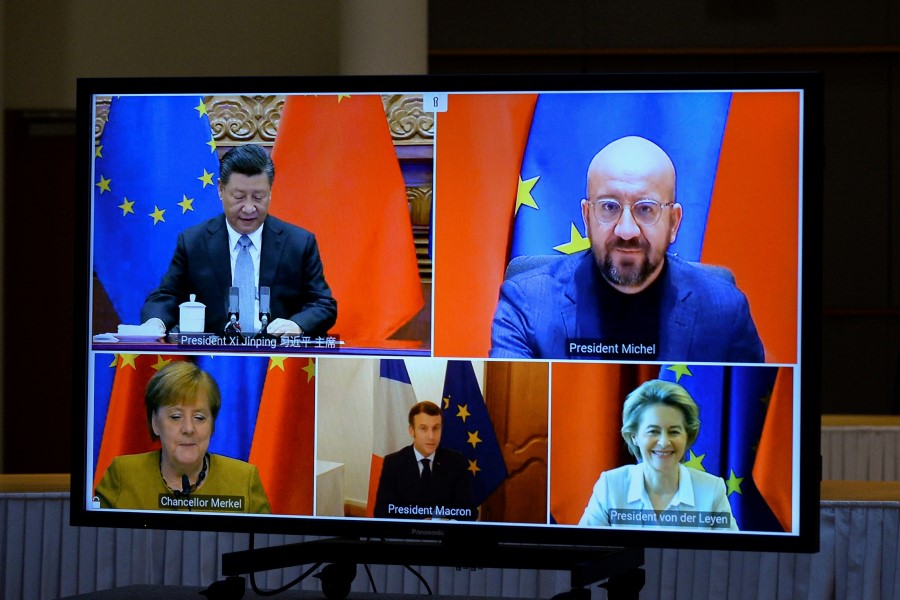 US Navy's 1st Fleet to sail the 'Western Pacific and the Eastern Indian Ocean'?

Candice Chan - 11 December 2020
The US has raised the possibility of reactivating its 1st Fleet in the Indo Pacific area. ISEAS academic Ian Storey notes that a reactivated 1st Fleet would boost the US naval presence in Asia, and demands on America’s allies and security partners in this region. What are the points of consideration for Asian countries and what is the likelihood that the reactivation will happen?
Read more A leaders' word game: 'Secure and prosperous' vs 'free and open' Indo-Pacific

Candice Chan - 11 December 2020
With the incoming Biden administration using the term "secure and prosperous" in place of "free and open" to refer to the Indo-Pacific, Japanese academic Shin Kawashima explores what this might mean for the future of the region and the roles played by Japan, China, and the US.
Read more Internal conflicts will be the downfall of the US

Candice Chan - 10 December 2020
US academic Han Dongping notes that the US is no longer in the leading position it used to hold, and it is finding it difficult to handle the challenges from other countries, especially China, not least because of its own domestic contradictions that are getting harder and harder to reconcile. It can no longer rely on old ways of maintaining order domestically and internationally. It has to come up with new strategies — fast.
Read more China has entered the 'gilded cage' of RCEP and is considering the CPTPP. What's next?

Candice Chan - 8 December 2020
With the recent signing of the RCEP and China’s comment that it will “favourably consider” joining the CPTPP, are prospects looking up for greater domestic reform and regional economic integration across the board, and will dreams of a free trade area of the Asia-Pacific have a higher chance of eventually taking shape? Japan-based academic Zhang Yun looks at the potential outlook.
Read more Candice Chan - 7 December 2020
Professor Chan Heng Chee, Ambassador-at-Large and Singapore’s former ambassador to the US, addressed the Lianhe Zaobao Singapore-China Forum on 4 December via Zoom. She said that there is still much that Singapore and China can work together on, such as in tightening the nuts and bolts of the recently signed RCEP, enhancing the ASEAN-China FTA, exchanging views on the CPTPP and WTO reform, and facilitating cooperation in the digital sector.
Read more
Translated by Candice Chan on 8 January 2021

On 30 December 2020, it was announced that a landmark China-EU investment deal had been reached. If talks had been completed within 30 months as the EU had hoped, the leaders of China and Europe would all have been happy, and it would have been seen as a win-win.

In fact, talks were finally concluded after seven years. China made unprecedented concessions in knotty issues including labour rights, transparency of subsidies to state-owned enterprises, and forced technology transfers; EU leaders pitched the agreement as a step forward in rebalancing the EU’s economic relationship with China. However, discussions among Western elites reflect a certain unease as if “a wolf is here”: there has been a steady stream of claims that China has come out the winner, that Europe is missing the forest for the trees, and that Europe and the US fell for Beijing’s ploy to come between them.

It is not just small and medium economies such as Poland who would not benefit as much from the deal who have made negative comments. Most commentaries from elites in Germany, the UK, and the US expressed that it was a pity that the US and Europe had passed up an opportunity to join together in containing China. Some commentators astutely observed that this investment deal is the most important economic agreement since China joined the World Trade Organization (WTO), but they were not overly sanguine about China’s commitment to becoming more open.

It is no longer acceptable to set aside differences in ideology and political systems and just work on economics; allowing China to open up its domestic market in exchange for geoeconomic and geopolitical advantages means that the West might lose out in a big way.

This is a clear reflection of the strong suspicions that elites in Europe and the US have formed about China, which explains why Asian versus Western values, human rights, and political competition are always considered in any interaction with China. It is no longer acceptable to set aside differences in ideology and political systems and just work on economics; allowing China to open up its domestic market in exchange for geoeconomic and geopolitical advantages means that the West might lose out in a big way. Of course, this is a result of “Cold War” machinations carried out over the past few years by international powers on China’s foreign relations, which have been exacerbated by China’s tough posture as well as tense diplomatic relations resulting from the coronavirus pandemic.

To be precise, the full name of the investment deal is the EU-China Comprehensive Agreement on Investment — the addition of the word “comprehensive” shows the values within. In contrast with the 15-member Regional Comprehensive Economic Partnership (RCEP) — which includes ASEAN and China — whose main function is to reduce tariffs and facilitate the flow of goods and services, the China-EU investment agreement is aimed at handling structural differences between both sides and to seek consensus on a legal framework and common rules on labour and subsidies for state-owned enterprises. Of the two, the latter is a higher-level international economic agreement.

Based on what the EU has indirectly revealed, the agreement’s provisions include dealing with the transparency of subsidies to state-owned enterprises, significantly opening up high-end manufacturing and financial services to EU enterprises, opening up medical services in big cities like Beijing, Shanghai, Guangzhou and Shenzhen, strengthening intellectual property protection, and so on. These could catalyse China’s domestic economic reforms, and build up a compelling force for further reforms.

... China’s public opinion is also apathetic towards an economic opening, and is instead more concerned with the strategic value of the agreement.

Low appetite for reform and opening up beyond rhetoric

However, it is not only the European and American elites that are unenthusiastic about China’s commitment to further opening up — China’s public opinion is also apathetic towards an economic opening, and is instead more concerned with the strategic value of the agreement. For example, they say that China “sealed the deal” on ASEAN and its neighbouring regions through the RCEP, and is now also “locking in” on Europe through the China-EU investment agreement. These could help China eliminate the risk of being isolated by the US, and avoid walking down the same path as the former Soviet Union.

At the same time, China is also starting to feel the pressure: state-owned enterprises in affected areas such as the financial industry are complaining in private, and private enterprises do not welcome greater competition from foreign enterprises either. In other words, Chinese enterprises are not looking forward to a further opening up and its resultant possible reforms.

At the end of 2020, renowned Chinese academic Zheng Yongnian pointed out in an article that the China-EU investment agreement heralds China's third opening up. He also hopes that China’s third opening up would commence this year, which marks the first year of the 14th Five-Year Plan. It is hoped that through its third opening up, which is a unilateral one, China would gain the right to speak and the power to make rules. Zheng believes that China has amassed sufficient material wealth and experience to deal with the negative impacts of globalisation.

In other words, China already has the power to withstand the economic pressure brought about by a unilateral opening up. This is perhaps why the Western elites are unenthusiastic about China’s opening up. On one hand, they think that the extent of China’s commitment to opening up remains limited, and question whether China’s promise can be tested. On the other hand, they are even more afraid that cooperation with China would mean giving it recognition and helping it grow. Instead of hoping that China would change in the course of opening up, some believe that suppression, isolation, and separation are more effective China policies.

Now, the situation has changed: while China’s higher-ups continue to encourage deepening reforms, the people are no longer enthusiastic. So then, who would form the core of China’s continued reform and opening up?

The Chinese people are also lukewarm towards further opening up, albeit for different reasons. On the economic front, the beneficiaries of the Chinese structure are already formed and cemented. To elites and the general public, a greater opening up could mean in-fighting from greater domestic competition on top of external competition. On the ideological and political fronts, liberal intellectuals could see the reform that authorities are pushing for as a different one from the kind of reform they have in mind.

While there are calls for a third opening up, the feedback from the commercial world shows that the public is not very supportive of reform and opening up. Over a decade ago, China, as well as other foreign countries, were once impatient with China’s slow reform and opening up, and had put stress and pressure on the system. Now, the situation has changed: while China’s higher-ups continue to encourage deepening reforms, the people are no longer enthusiastic. So then, who would form the core of China’s continued reform and opening up? While China has become more powerful in dealing with external competition, reforms have also become an even tougher task.

Related: Chinese academic: China-EU investment deal is of great strategic value to China | Heritage, CCP traditions & liberalism: Three fundamentals of China's new social contract | China has entered the 'gilded cage' of RCEP and is considering the CPTPP. What's next? | RCEP: The start of a new ‘China-centric’ order? | China’s 14th Five-Year Plan will be a game changer