Chen I-hsin asserts that the US is no longer in a position to facilitate cross-strait talks, given that China’s national strength has increased considerably and the US is no longer seen as a neutral arbiter. Moreover, the “two states” theory which Taiwan’s ruling party seems to support leaves little room for dialogue, rendering any pressure from the US futile. 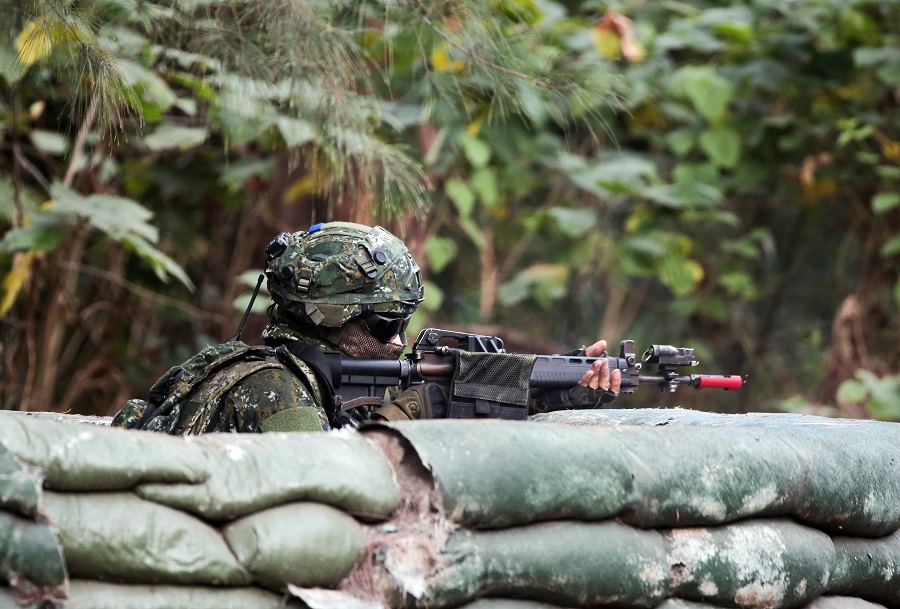 A soldier participates in a military exercise simulating an invasion by China, organised by Taiwan's Army Infantry Training Command, in Kaohsiung, Taiwan, on 6 January 2022. (I-Hwa Cheng/Bloomberg)

Grace Chong - 27 January 2023
Regulators are ramping up efforts to cull poorly performing firms and those that violate the rules or break the law. A record number of companies got the boot from Chinese mainland stock exchanges last year, and that number could even double in 2023.
Read more
Translated by Grace Chong on 11 January 2022

The virtual US-Japan Security Consultative Committee (“2+2”), involving US Secretary of State Antony Blinken and US Defence Secretary Lloyd Austin and their counterparts Japanese Foreign Minister Yoshimasa Hayashi and Japanese Defence Minister Nobuo Kishi, was held on 7 January. Other than reaffirming the US-Japan Alliance’s critical role as “the cornerstone of regional peace, security, and prosperity”, voicing concern about China’s activities in the East China Sea and South China Sea, and committing to strengthening joint capabilities, both countries encouraged the peaceful resolution of cross-strait issues.

The US’s White House Indo-Pacific coordinator Kurt Campbell had also called for cross-strait talks on 6 January. In fact, at the Taiwan-US-Japan Trilateral Security Dialogue prior to taking up his post, he had encouraged Taiwan President Tsai Ing-wen to establish a high-level communication channel with Beijing to lower the risk of misjudgments.

A decade ago when China’s president was Jiang Zemin or Hu Jintao, whether in the era of US President Bill Clinton or George W. Bush, Washington was effective in facilitating cross-strait talks. But why has the US failed to play a constructive role since President Xi Jinping took office?

Firstly, China’s national strength has changed and the country is no longer weak like before. In terms of economic power, China’s GDP is 70% that of the US, and this is also why China has been trying to challenge the US in recent years.

China’s rapid rise and the narrowing gap in their national strengths is undoubtedly a reason why Washington’s calls for cross-strait talks have fallen on deaf ears.

Although the US military is top in the world, US President Joe Biden remains wary of Beijing’s development of new weapons such as hypersonic missiles.

While the US still reigns supreme overall in the high-tech field, China is not only leading in 5G communications but is also quickly catching up with the US in the fields of artificial intelligence, high-speed computers, automation, space telescopes and space technology.

China’s rapid rise and the narrowing gap in their national strengths is undoubtedly a reason why Washington’s calls for cross-strait talks have fallen on deaf ears.

Secondly, the US and China are in intense competition right now. While Biden and Xi agreed during their conversation via video link on 16 November 2021 to “ensure that the competition between our countries does not veer into conflict”, the days of China accepting dialogue pressure from the US are gone.

Amid this intense US-China competition, Taiwan is one of the key sources of rivalry between these two powers. For Beijing, Taiwan is an inseparable part of its territory; for Washington, losing Taiwan would mean losing an important node in the first island chain, and would lead to the US losing credibility in Asia.

Given that the US and China each have their stand and points of insistence, naturally Beijing would not give in to dialogue pressure from the US, so as not to give the impression that China is weak.

In her speech on 10 October 2021 — known as Double Tenth Day commemorating Taiwan’s national anniversary — Tsai said that the Republic of China (ROC) and the People's Republic of China (PRC), as Taiwan and the mainland are officially called, are "not subordinate to each other", intentionally stirring cross-strait conflict and disagreement between the US and China. However, the US and China quickly saw through Tsai’s intentions, and decided to give it little attention and let it pass.

During the video summit on 16 November 2021, Biden told Xi that “the US does not support Taiwan independence”; at the White House press conference on the same day, Biden stressed to the media that the US was “not encouraging independence”. These statements in fact demonstrate that “Taiwan independence” is an issue co-managed by the US and China, with little autonomy on the Taiwanese side.

...the “two states” theory has wrecked cross-strait relations — not only is there no longer room to resume talks, but both sides of the Taiwan Strait are on the brink of war.

Amid China’s rapid rise and intense US-China competition, as well as the “two states theory” that has wrecked cross-strait relations, dialogue pressure from the US is of no use.