A Xi-Biden handshake does not bridge the Sino-US schism, but it's a start

The handshakes and smiles in Bali have triggered some optimism about Sino-US relations going forward. Yet the slight uptick in Sino-US relations post-Bali might well be short-lived, given the superpowers’ underlying structural competition and deep mutual distrust. US President Joe Biden shakes hands with Chinese President Xi Jinping as they meet on the sidelines of the G20 Leaders' Summit in Bali, Indonesia, 14 November 2022. (Kevin Lamarque/Reuters) Chinese ambassador Sun Haiyan: Why not think about China in this way?

Candice Chan - 18 November 2022
Chinese ambassador to Singapore Sun Haiyan responds to an article by Lee Huay Leng, editor-in-chief of SPH Chinese Media Group. She notes that while individual stories have to be remembered, national policies have to take into account the big picture. The difficult but necessary decisions taken on Covid management reflect this.
Read more 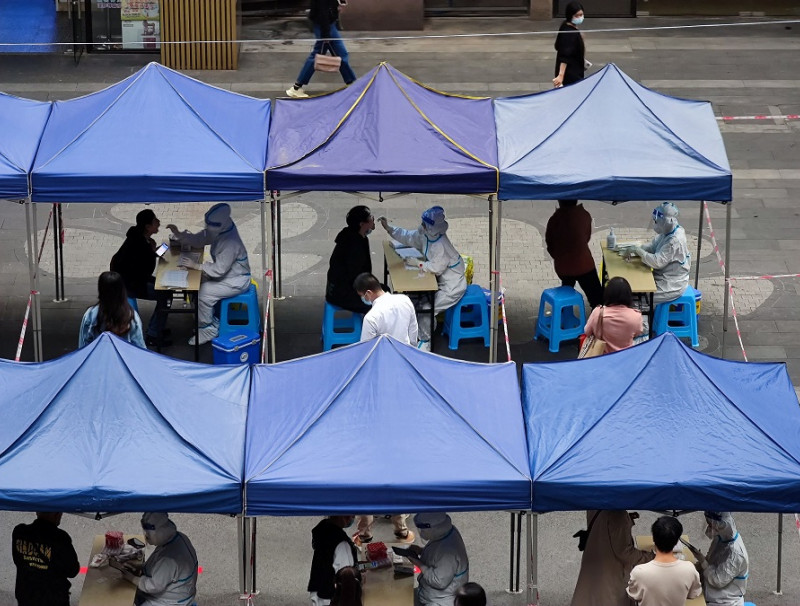 Candice Chan - 17 November 2022
Chongqing is seeing its worst outbreak in three years, and although residential communities have been put under restrictions similar to 2020, the local authorities have not called it a citywide lockdown, leading to confusion. Zaobao correspondent Edwin Ong looks at how Chongqing is handling the latest wave, including a new regional coordination strategy proposed by party secretary Chen Min’er.
Read more 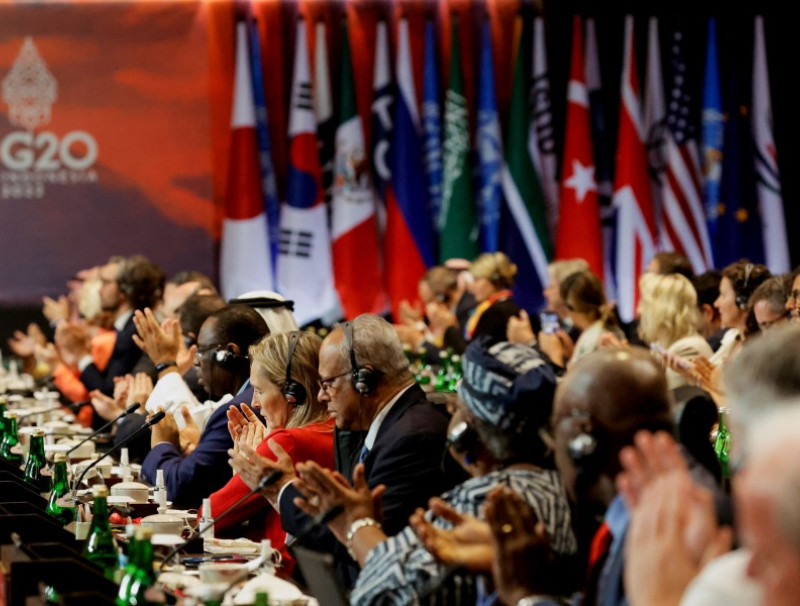 The G20 Summit: Who makes the world’s rules?

Candice Chan - 16 November 2022
The Group of 7 are relatively aligned in their perceptions of global challenges, particularly when it comes to strategic competitors such as China and Russia, but the same perceptions do not hold true when it comes to the remaining members of the bigger Group of 20.
Read more Indonesian elites and the general public have different views of China

Candice Chan - 16 November 2022
Presidents Xi Jinping and Joko Widodo witnessed the test "ride" of the Jakarta-Bandung High-Speed Rail (HSR) via livestream during Chinese President Xi's visit to Indonesia for the G20 Summit in Bali. Economic cooperation remain high on the cards of bilateral relations, but while China’s trade and investment in Indonesia have grown substantially since the early 2000s, the Indonesian public does not share Jakarta’s desire to wholeheartedly embrace Beijing.
Read more China's efforts to internationalise RMB gaining a foothold in SEA

Candice Chan - 16 November 2022
NUS academic Xu Le explains why China's project to internationalise the RMB still has much room to grow. In that regard, the ASEAN countries could play a role, given their desire to be less reliant on the US dollar.
Read more
Translated by Candice Chan on 18 November 2022

Judging from all the smiles, handshakes and positive comments from both sides, Chinese President Xi Jinping and US President Joseph Biden had a useful and constructive meeting in Bali. Key achievements from their summit included the resumption of climate talks, stated opposition to the use or threat of nuclear weapons in the Russia-Ukraine war, and mutual affirmation that great power conflict and nuclear war are unacceptable.

The Bali summit offered a welcome respite to the rising tensions between the two powers in prior months. With in-person communications restored at the highest level, fears over an imminent Sino-US conflict in the Taiwan Strait have been alleviated, at least for now. The positive atmospherics between Xi and Biden in Bali can help thaw the relationship, albeit only to a certain extent.

Even as the US and China are clear-eyed about their vigorous competition on all fronts going forward, their leaders now sense that talking frankly to each other builds confidence, and Biden and Xi have agreed to empower their key senior officials to maintain communication. A follow-up visit by US Secretary of State Antony Blinken to Beijing planned for 2023 may help stabilise bilateral ties further.

An era of great power competition

Of course, one swallow does not a summer make. A sustained Sino-US global contest is here to stay, given underlying structural factors and deep mutual distrust. The Biden administration’s recent National Security Strategy (NSS) made it clear that the US views the present as an era of great power competition, and that China is “the only competitor with both the intent to reshape the international order and, increasingly, the economic, diplomatic, military, and technological power to do it”.

The words “compete”, “competition”, and “out-compete” appear over 100 times in the NSS. Even though America’s domestic political scene has seldom been so divided in its modern history, bipartisan consensus on the need to confront and compete with China is at its strongest ever.

Washington has repeatedly said that it does not want to contain China, but it has taken decisive steps to slow its rise, especially in critical technologies such as semiconductor manufacturing. In October 2022, the Biden administration doubled down on the “chip war”, introducing sweeping restrictions on Chinese access to advanced semiconductor technologies.

Now that the Republicans hold a slim majority in the US House of Representatives after the mid-term elections, a more hawkish lower house would potentially complicate Biden’s approach to Taiwan.

On Taiwan, the most explosive issue in Sino-US ties, momentum is building up for the Taiwan Policy Act, which seeks to offer Taiwan substantial defence assistance to deter Chinese aggression, following its approval at the US Senate Committee on Foreign Relations in September. Now that the Republicans hold a slim majority in the US House of Representatives after the mid-term elections, a more hawkish lower house would potentially complicate Biden’s approach to Taiwan. If prospective House Speaker Kevin McCarthy follows in his predecessor Nancy Pelosi’s footsteps and visits Taiwan as he promised, Sino-US tensions will again escalate.

China has similarly dug in its heels. Xi’s report to the Chinese Communist Party's 20th Party Congress used the term “struggle” (斗争 douzheng) 22 times to brace China for “drastic changes in [the] international landscape, especially external attempts to blackmail, contain, blockade and exert maximum pressure on China”. Xi’s “charm offensives” in Bali — to the US and US allies such as Australia — were simply a tactic to slow down US-led coalition building that has gained traction precisely because of Beijing’s aggressive foreign policy. Xi may have toned down his trademark “wolf warrior” diplomacy but Beijing’s fighting spirit will continue to be embedded in China’s strategic outlook and propaganda system.

The Sino-US contest has been and will be the most pronounced in Asia where the superpowers’ strategic goals clash in the starkest terms.

The Sino-US contest has been and will be the most pronounced in Asia where the superpowers’ strategic goals clash in the starkest terms. Beijing wants to reintroduce a sino-centric regional system in which China’s influence and core interests take primacy and American influence becomes inconsequential, if not marginal. Both powers have taken substantial steps to build alliances, coalitions, and partnerships to shape the regional order in their own image. The US-led Free and Open Indo-Pacific (FOIP) and China-sponsored "community of common destiny", and more recently the Global Development Initiative (GDI) and Global Security Initiative (GSI), have become tools for coaxing regional countries to adopt their respective worldviews.

But even as the two superpowers have braced themselves for an era of strategic competition, there is some comfort in the G20 Bali Leaders’ Declaration affirming that “today’s era must not be of war” and that “peaceful resolution of conflicts, efforts to address crises, as well as diplomacy and dialogue, are vital”. The adoption of this joint statement — despite the Sino-US systemic schism and entrenched differences on Russia’s war in Ukraine — is a win for diplomacy.

Unlike during the Cold War, today’s world offers multiple multilateral avenues for high-level diplomacy. Southeast Asian countries — which are plugged into important multilateral fora across the Indo-Pacific — have made their mark during the 2022 summit season with Cambodia, Indonesia, and Thailand hosting the leaders of ASEAN, G20, and APEC respectively.

Amid great power tensions, regional states can nevertheless still assert their agency and not lose sight of opportunities which come their way.

Another silver lining post-Bali is the prospect of a healthier and potentially positive-sum contest among major powers to show "which system of governance can best deliver for their people and the world". Southeast Asian countries — with their open and pragmatic outlooks — stand to benefit from this competitive dynamic.

In Bali, G20 host Indonesia secured a US$20 billion partnership, backed by Japan, the US, South Korea and European countries, to support and accelerate its energy transition. Indonesia and other Southeast Asian countries also rank among the largest recipient of China’s Belt and Road Initiative (BRI) financing; together they account for a third of the GDI’s projects. Amid great power tensions, regional states can nevertheless still assert their agency and not lose sight of opportunities which come their way.

This article was first published by ISEAS – Yusof Ishak Institute as Fulcrum commentary. Fulcrum editor's note: The authors would like to thank Daljit Singh for his valued input.