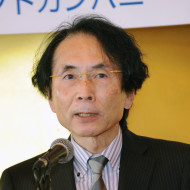 Dr Yoshiyuki Ogasawara is a professor of Taiwanese politics at the Tokyo University of Foreign Studies. He received a doctoral degree at Hitotsubashi University. He has been observing the development of Taiwanese politics for the past 30 years and has met many Taiwanese politicians including local village chiefs, party officials, legislators, ministers, and President Tsai Ing-wen. He published Presidential Elections in Taiwan in 2019, for which he received the Asia Pacific Award and the Kashiyama Junzo Award in 2020. By Yoshiyuki Ogasawara 27 Dec 2021
​Taiwan’s four-question referendum did not pass, to the relief of the DPP and disappointment of the KMT, says Professor Yoshiyuki Ogasawara of the Tokyo University of Foreign Studies. That the motion to reinstate an import ban on pork with ractopamine, namely US pork, did not go through is significant, as it is an election issue that could have a detrimental impact on the DPP. Results aside, the referendum itself was a show of democracy at work and in some ways a bulwark against reunification with the mainland.