Are the Chinese facing a crisis of confidence in the government?

As the Chinese authorities ease Covid-19 controls and infections increase, hearsays about symptoms, treatments and folk remedies are widespread. Lianhe Zaobao correspondent Chen Jing looks at why people fall for these baseless rumours and remain wary of the government’s responses. 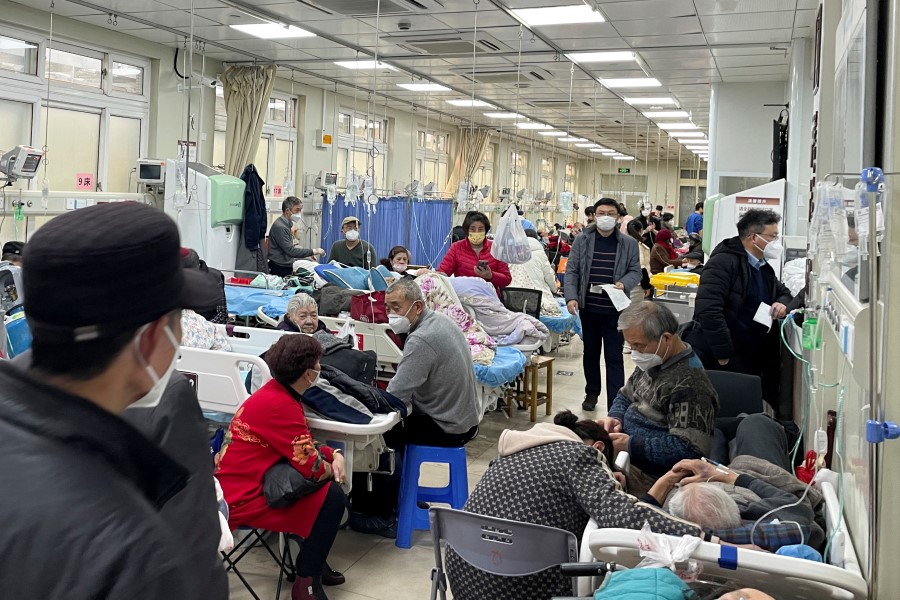 Patients lie on beds in the emergency department of a hospital, amid the Covid-19 outbreak in Shanghai, China, 4 January 2023. (Reuters)

Candice Chan - 30 January 2023
A mall in Shenzhen came under fire for putting up white lanterns with black text as part of its Chinese New Year decorations, while an “ugly” rabbit-shaped light decoration was removed from another mall in Chongqing. Academic Zhang Tiankan muses on tradition and innovation, and the evolution of traditional decorations.
Read more
Translated by Candice Chan on 5 January 2023

On 1 January, a friend in Guangzhou tagged on his new year greeting with the question: “Is diosmectite still available in Shanghai?”

Sensing my confusion, he sent a screenshot from a delivery platform showing that this anti-diarrhoea medication was out of stock at various pharmacies. On Weibo, I found that “diosmectite” was the top search term and the first hot topic of the new year on China’s social media platforms.

Digging deeper, I found a post that claimed that the Omicron variant XBB 1.5 — set to be the dominant strain in China — “mainly attacks the blood vessels in the heart and brain and leads to diarrhoea”, and advised people to prepare diosmectite, rehydration salts and probiotics.

On New Year’s Day, diosmectite was sold out in pharmacies across cities such as Beijing, Shanghai and Shenzhen. The originator of the post that sparked the buying frenzy is not a medical expert or a “Big V” on Weibo, but an ordinary netizen in the printer business. He later clarified that there was no basis for his claim that the XBB variant causes diarrhoea — it was mere conjecture.

The sudden shift in China’s Covid-19 policy has led to a sharp rise in infections along with countless rumours.

Earlier on Christmas Day, China was swept by another online rumour. A Weibo user claiming to hold a doctorate in virology posted that he was infected twice in five days with different variants of Covid-19, which was confirmed through laboratory testing at the Suzhou Industrial Park (SIP) Center for Disease Control and Prevention where he worked.

This post was shared tens of thousands of times, sparking panic among netizens about reinfection. However, the SIP Center for Disease Control and Prevention later clarified that this “doctor of virology” was in fact a convenience store worker who came up with a fake identity and put together the post to get views — he has since been detained by the police.

The sudden shift in China’s Covid-19 policy has led to a sharp rise in infections along with countless rumours. From symptoms and lingering effects to treatments and medication, rumours are spreading about every topic imaginable. It is unbelievable how outrageous many of these rumours are, such as killing the virus by sniffing Chinese liquor, the virus spreading through tap water, and avoiding showering within ten days of getting infected.

It is ridiculous that even a screenshot of some random chat, or a statement with no scientific basis, could lead to medicine being sold out, send shockwaves through the stock market, and cause snaking queues at outpatient clinics.

... the authorities’ demonisation of the virus and extreme Covid-19 controls over the past three years, as well as the policy changes that came without warning have a critical part to play.

The most straightforward reason for such extreme reactions is that amid an unprecedented large-scale virus outbreak, people are anxious and afraid; coupled with a lack of knowledge of the virus, they desperately turn to all sorts of treatments.

However, upon closer scrutiny, the authorities’ demonisation of the virus and extreme Covid-19 controls over the past three years, as well as the policy changes that came without warning have a critical part to play.

Just take the widespread “white lung” rumour as an example. Several Covid-19 patients have claimed that their CT scan results showed that they had “white lungs” or serious lung damage, which matched that of Covid-19 patients in Wuhan when the pandemic had just hit in 2020. They believed that it was the re-emergence of the coronavirus’s original strain.

Another rumour claimed that upon recovery, Covid-19 patients must replace their toothbrushes, towels and other daily necessities or risk reinfection from the residual virus on the items. Officials again denied such claims, asserting that the virus becomes inactive soon after it leaves the body and is unlikely to spread through contact surfaces. But netizens sneered, “That’s not what you said when you barged into the houses of Covid-19 patients and culled their pets, threw their personal items away, and sprayed disinfectant all over.”

... “everything the government says is a lie”. — Shanghai resident

China’s strict three-year Covid-19 containment policy has changed overnight, with official narratives and control measures completely reversing, catching the people off guard and dealing a blow to the government’s credibility.

Shanghai also met with such a crisis of confidence in the first half of 2022. Friends in the city shared that their parents’ trust in the government crumbled after surviving the two-month lockdown. While they had gladly responded to the government’s call to get vaccinated in the past, they no longer want to get booster shots and are convinced that “everything the government says is a lie”.

Inevitably, health experts’ authority took a hit when state media quoted them as first saying that Covid-19 is not just a “big flu” and then just nine months later asserting that Covid-19 can simply be called a “cold”. Meanwhile, the accuracy of official statistics was naturally called into question when authorities suddenly stopped reporting daily Covid-19 data.

Needless to say, patients would simply turn to unproven treatments for Covid-19 when there is a shortage of basic fever medication and the needs of the rapidly climbing infected population are not met.

At the press conference announcing the downgrade of Covid-19 management from Class A to Class B, National Health Commission officials emphasised that the country’s three years of stringent Covid-19 measures have not only withstood five global Covid-19 waves but also “gained time” to develop vaccines, drugs and medical resources. However, the situation over the past month has not only brought to light the country’s still-low vaccination rate among the elderly, but also the insufficient medical resources and the absence of a clear and effective public opinion campaign.

To nurture wise people, there must first and foremost be open and transparent information sharing, honest and effective communication, and an attitude of seeking truth based on facts.

At a time when the healthcare system is under unprecedented pressure, rampant rumours have not only deepened the public’s fear and anxiety, but also delayed essential treatment, exacerbated the run on medical resources, and added more uncertainty to China’s road to reopening.

As a Chinese saying goes: “A wise man does not believe in rumours.” To nurture wise people, there must first and foremost be open and transparent information sharing, honest and effective communication, and an attitude of seeking truth based on facts.

This article was first published in Lianhe Zaobao as “疫情谣言再起”.

Related: How China bolted from zero Covid towards herd immunity | China prepares for Covid peaks in January | From zero-Covid to living with the virus: Chinese society's adaptability put to the test | Is China ill-prepared for a surge in Covid cases?