The ‘business’ between Steve Bannon and Guo Wengui

What exactly is the relationship between former Trump right-hand man Steve Bannon, and fugitive China businessman Guo Wengui? What do their dealings show about the scaremongering tactics and half-truths that can be used in any society? Zaobao associate editor Han Yong Hong examines Bannon’s recent arrest and how Guo fits in. 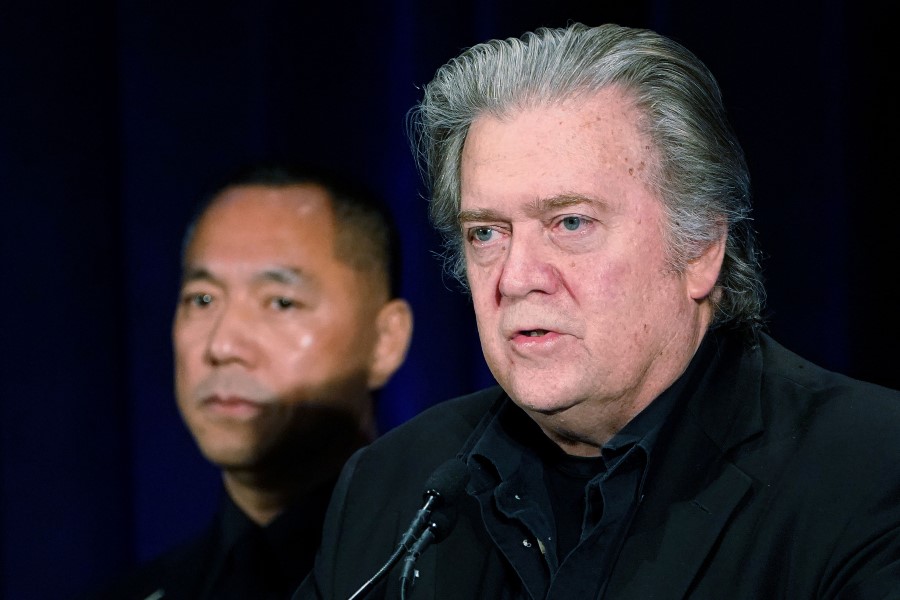 Candice Chan - 30 January 2023
A mall in Shenzhen came under fire for putting up white lanterns with black text as part of its Chinese New Year decorations, while an “ugly” rabbit-shaped light decoration was removed from another mall in Chongqing. Academic Zhang Tiankan muses on tradition and innovation, and the evolution of traditional decorations.
Read more
Translated by Candice Chan on 28 August 2020

Steve Bannon — US President Donald Trump’s former campaign CEO and former White House chief strategist — was arrested last Thursday on charges of defrauding donors in a fundraising campaign purportedly aimed at supporting Trump's border wall with Mexico. He has not gone on trial, but this charge has dispelled the ideological myth of the extreme right.

Bannon, 66, was arrested with three others. They worked together on a private fundraising effort called We Build the Wall that raised US$25 million, and are now charged with using nearly US$1 million of it for personal expenses through a non-profit organisation.

While the indictment did not name the non-profit, it is a clear reference to Citizens of the American Republic, founded by Bannon in 2017.

Tax information shows that the organisation received US$4.45 million in donations in 2018, with up to US$4.39 million going towards personal expenses...

According to the indictment, this organisation that claims to “advance the ideals of economic nationalism and American sovereignty” funnelled $350,000 from We Build the Wall to support the lavish lifestyle of another member of the group Brian Kolfage, who spent it on home renovations, boat payments, a luxury SUV, a golf cart, jewellery, and personal tax and credit card payments.

(Bannon) quickly linked up with Guo Wengui, a fugitive Chinese billionaire in the US, and continued his right-wing propaganda while getting into anti-Communist “business”.

The secretive Citizens of the American Republic is Bannon’s platform for spreading Trump’s ideology. Tax information shows that the organisation received US$4.45 million in donations in 2018, with up to US$4.39 million going towards personal expenses, including $1.4 million on conferences, conventions and meetings, and $1.1 million on “other expenses”. Another $50,000 went to Bannon’s film company, and $40,000 to Bannon’s nephew and sister. In January, Bannon announced that he was preparing to film a tell-all documentary on the Chinese president — as it turns out, the documentary has not been released but he now has a lawsuit on his hands.

In fact, the career of Bannon, a Harvard Business School graduate, has been closely linked to China from some ten years ago, and even more so in recent years.

Bannon was an officer in the navy, and had worked for investment bank Goldman Sachs. He has invested in sitcoms, and for six years managed a company with operations in Hong Kong and Shanghai, that mined gold for the online game World of Warcraft. After that venture failed, he went back to the US and took charge of a right-wing news website, and subsequently drove Trump’s “America First” movement with anti-immigration ideology. But in 2017, about seven months after Trump moved into the White House, Bannon was out. He quickly linked up with Guo Wengui, a fugitive Chinese billionaire in the US, and continued his right-wing propaganda while getting into anti-Communist “business”. Bannon worked for Guo, who provided the funds.

Bannon and Guo’s close relationship is evident through the former’s arrest on the latter’s yacht, “Lady May” (the yacht is now on sale for US$28 million). According to American media reports, Bannon signed a contract in 2018 with Guo Media, a company linked to Guo, that would pay him US$1 million per year to introduce Guo Media to media personalities. In November 2018, the pair announced the establishment of a US$100 million Rule of Law Fund to investigate abuses of power in the Chinese Communist Party (CCP). By the looks of it, they could not wait for China-US relations to get worse.

Bannon supports Trump and often harshly criticises the CCP through his podcast Bannon’s War Room. And in June this year, this former White House chief strategist was seen on Guo’s yacht. Against the backdrop of New York’s Statue of Liberty, the pair livestreamed the founding of a self-declared “New Federal State of China”. They even managed to rope in retired Chinese soccer legend Hao Donghai and his wife.

These people have for a long time systematically instigated fear and hatred not out of conviction but a desire to enrich themselves.

Now, the US Federal Bureau of Investigation has turned its attention to Guo. It is investigating if the US$300 million raised in a private offering in Spring this year for GTV, a media company tied to the pair, is illegal according to US law.

The reality is that there are people who make money out of scaremongering in every country. There are also some people — many people, in fact — who believe in half-truths.

Following Bannon’s arrest, these “businesses” of his have become even more absurd and disturbing to some extent. They are disturbing because Bannon is charged with fraud in connection with a crowdfunding campaign to build a border wall, demonstrating that there is no lack of people seeking to profit from peddling far-right ideologies. These people have for a long time systematically instigated fear and hatred not out of conviction but a desire to enrich themselves. Bannon’s so-called “economic nationalism” should be named “nationalist economy” instead.

The reality is that there are people who make money out of scaremongering in every country. There are also some people — many people, in fact — who believe in half-truths. For example, Guo has a history of legal entanglements in China. In 2017, he frequently named and attacked senior leaders in the CCP while he was overseas. Although most of the bizarre tales told by him are impossible to prove, people from inside and outside of China followed the news closely everyday.

Upon his release from custody on a US$5 million bail last week, Bannon quickly interviewed Guo on his podcast channel and GTV, speaking about the severity of China’s floods and how the officials are hiding the truth. Going by GTV’s production standards, it is clear that Guo and Bannon’s influence is waning. Yet, how is society going to recover from ravages following years of extreme right politics? Who knows how many more scandals we would uncover if every single member of the political and business elite who has been advocating extreme ideologies is investigated?

Related: Will the ‘most corrupt official in China’ be sentenced to death? | Chongqing residents on worst floods in 40 years: This has not been a good year | Floods in China: Can the Three Gorges Dam weather ‘once-in-a-century massive floods in the Yangtze River’?