Can the Chinese criticise their patriotic movies?

The movie The Battle at Lake Changjin has broken all sorts of box office records in China. This patriotic drama portrays Chinese volunteer troops fighting in the Korean War against the US, and is highly rated by the authorities and the public. However, certain comments have been criticised for being disrespectful to the people and times in the movie, and the police have detained Chinese financial media personality Luo Changping for his allegedly disparaging comments against the country's volunteer fighters. Zaobao’s China Desk examines the issue. 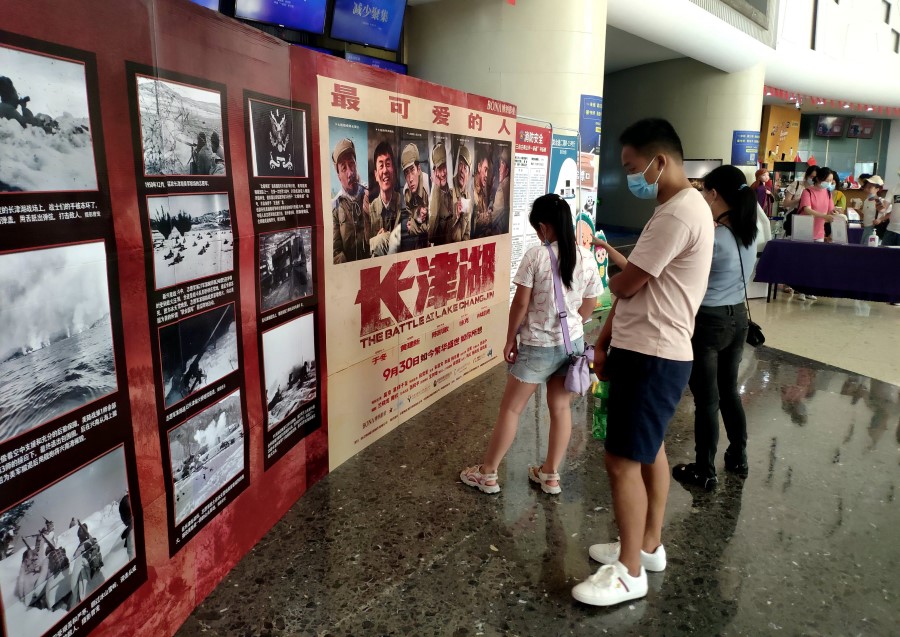 People look at publicity posters of The Battle at Lake Changjin at a cinema in Fuzhou, Fujian province, China, on 7 October 2021. (CNS)

Candice Chan - 30 September 2022
Chinese President Xi Jinping was not seen in public for over a week after attending the Shanghai Cooperation Organisation summit in Uzbekistan, sparking rumours of a “coup” ahead of the 20th Party Congress. Zaobao associate editor Han Yong Hong looks into the phenomenon, noting that in fact the 20th Party Congress has seen relatively few rumours surrounding it.
Read more
Translated by Candice Chan on 12 October 2021

Since its release, China-produced movie The Battle at Lake Changjin — based on the Battle of Chosin Reservoir during the Korean War — has broken over ten records in China, including single-day records for dramas and war movies, as well as the number of opening day screenings during the National Day period (Golden Week). It has been strongly promoted in China’s state media and received good reviews, and has done well in terms of the box office and critical acclaim.

On 2 October, the third day of the movie’s release, Chinese state news agency Xinhua praised it for succeeding with its “unconventionality, emotional impact, and effective exploration”.

This laudatory article quoted Professor Wang Yichuan of Beijing Normal University: “Most importantly, this movie answers why we had to fight that war. Because ‘if we did not, our next generation would have to fight’.”

The article also quoted China Film Critics Association president Rao Shuguang praising the movie’s fresh exploration and treatment of the narrative of war as setting a good direction for the industry, and providing an example for future China-produced war movies.

On 7 October, Xinhua also published an article titled “Why is the 176-Minute Movie The Battle at Lake Changjin So Popular?”, including an interview with Dante Lam, one of the directors of the movie, as well as detailed analyses of the cinematography, sets, directors and producers, and the cast.

On 5 October, Chen Kaige, co-director of the film, published an article in People’s Daily titled “For a Solid Movie, Write Characters Well”, in which he recounted the tough filming process, and wrote: “No matter how much the suffering and sacrifice, we wanted to win peace and respect through victory.”

On 4 October, 1905.com under CCTV6 ran an article praising Jackson Yee for transitioning from an online celebrity to a bona fide young actor, noting that with Lake Changjin, he has managed something no one else has — the total box office takings of the movies he has appeared in has hit over 5 billion RMB (about S$1 billion).

This historical movie is directed by Chen Kaige from mainland China and Tsui Hark and Dante Lam from Hong Kong, and fronted by heavyweight stars Wu Jing, Jackson Yee, Duan Yihong, and Hu Jun. It took five years to film and cost 1.3 billion RMB, and was released on the eve of mainland China’s National Day. It is no surprise that the authorities are promoting it.

However, besides coming out strongly to support the movie, Chinese state media has shouldered yet another responsibility — rebutting and criticising any scepticism about the battle depicted in the movie.

On 6 October, Chinese financial media personality Luo Changping wrote on Weibo: “After 50 years, people seldom reflect on the legitimacy of the war, just like the ‘sand sculpture division’ (沙雕连) back then did not doubt the ‘clever’ decisions of those on top.”

The movie portrays the “frozen division” (冰雕连, literally “ice sculpture division”) as an important symbol in this war in support of North Korea against the US, referring to China’s volunteer troops who froze to death still bravely holding their positions. The term “sand sculpture” (沙雕) is Chinese online slang for stupid or brainless.

Luo’s comments were seen as doubting the legitimacy of the war in support of North Korea against the US, and a humiliation of the volunteer fighters.

The same day, a post by "Jun Zheng Ping" (钧正平), an official account under PLA media, criticised Luo for having no conscience in humiliating the “frozen division”. The article warned: “Heroes are not to be mocked! Their names are not to be smeared! They are not to be insulted!”

In a Weibo post on 7 October, the Communist Youth League Central Committee also levelled the criticism that people should not be enjoying the good life that came through the hard work of pioneers while smearing them with no sense of conscience. “We do not agree with smearing the martyrs who helped North Korea against the US!”

In fact, discussions about the Korean War have always swirled around on the Chinese internet. But following the premiere of The Battle at Lake Changjin, such discussions have become more intense. In an article published two days after the film premiered, the PLA media account Jun Zheng Ping questioned: “Those people making snide remarks about China’s victory at Lake Changjin — what exactly are they trying to achieve?”

The aforementioned article by the Communist Youth League Central Committee also reiterated: “If we don't fight this war, our next generation will have to fight it.” It emphasised that soldiers risked their lives then so that the next generation would not have to do so, indirectly rebutting questions online over whether China’s participation in the war was necessary or justified.

It is understandable that the officials are refuting doubts from a historical perspective. Besides, releasing a Korean War-themed film as a “cinematic gift” at this point in time amid tense China-US relations has great significance as well.

But the next question is, is it appropriate for a publicly screened film not to even entertain criticisms from an artistic perspective?

“The computer graphics were unnatural and the special effects for the war scenes unrefined. The duration of the film was too long, and there were too many redundant scenes.” - Douban user review

Are patriotic films immune to criticism?

By 12 October, over three hundred and seventy thousand people have given The Battle at Lake Changjin a rating on Douban, a Chinese website that allows users to review books and movies. 5.8% of users rated the movie two out of five stars, while 1.5% of users gave it a one-star rating. Over 30% of users gave it three stars, and this popular film currently scores 7.6 points out of ten, which is not exactly a high score.

A comment that received many likes read: “The computer graphics were unnatural and the special effects for the war scenes unrefined. The duration of the film was too long, and there were too many redundant scenes.”

Other netizens commented, “I felt like I was wasting time watching a three-hour movie; the duration was long but the scenes were not engaging enough to keep me watching.” Another said the fact that “so many heroes who froze to death were only briefly mentioned gives the wrong impression that China effortlessly defeated the US back then.”

“The main theme of the movie is like a face injected with too much hyaluronic acid”; “Who dares to criticise a movie backed by state media?” - Netizens

Sharp-tongued netizens even said, “The main theme of the movie is like a face injected with too much hyaluronic acid”; “Who dares to criticise a movie backed by state media?”

Alas, WeChat official account deep_focus (深焦DeepFocus) was banned for two weeks after it published an article criticising The Battle at Lake Changjin. The article was also deleted.

The editorial team at Deep Focus released a statement confirming its temporary ban, saying at the end, “Movies are not that scary, and movie reviews aren’t as well!”

But was the review actually “scary”? From screenshots found online, the review mainly gave criticisms and suggestions on the movie’s special effects, editing, split screen and creative concepts from a professional perspective. It also pointed out that only half the cinema was filled at some of the movie’s showtimes, casting doubt on the actual box office takings of the movie. But it did not touch on any sensitive political or historical topics, and cannot be considered scary at all.

The commentary criticised the film’s special effects for basically being more than ten years behind the highest industry standards of China-made films. But it also praised the shots of the indoor action scenes as being relatively stable and sustained, and full of tension.

State media once said that patriotism must never be commercialised into a business. But does this mean that patriotic themes can be used as a cover for works of lower artistic standards?

Evaluating it from a creative perspective, the review concluded that perhaps movies of this genre stress on the group as a whole rather than individual characters, and focus on breadth rather than depth. The result is that the audience’s auditory and visual senses are stimulated but their emotions and sense of empathy are not necessarily evoked. It urged future films of this kind to delve into greater substance, and not just depict scenes of history.

This movie review contained the writer’s earnest wish to see China-made movies improve and is well-founded and logically sound. Thus the only reason why it was deleted could possibly be simply that it criticised the movie.

Related: Celebrities scrubbed from the Chinese internet: Victims of China’s social revolution? | When doing business in China, beware of patriotic netizens | More Chinese youths proud to be associated with the CCP | Facing the ire of 1.4 billion Chinese consumers: Multinational companies cottoning on to supply chain risks