East Asian countries are showing early signs of getting the pandemic under control and must channel their relative stability towards spearheading the economic recovery of the region if they wish to play a larger role in shaping the international order post-Covid 19. 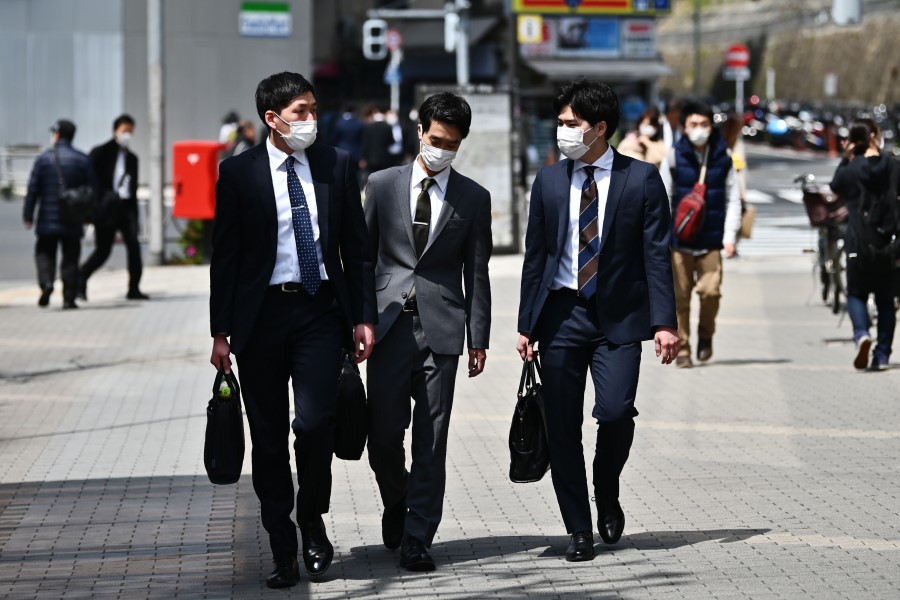 People in Tokyo's Gotanda area, April 7, 2020. Japan's Prime Minister Shinzo Abe declared a state of emergency in parts of the country, including Tokyo, over a spike in coronavirus infections. (Charly Triballeau/AFP)

Candice Chan - 28 November 2022
Often referred to as the world’s economic “canary in the coal mine”, South Korea has seen its economy tumble over the past year, impacted by external factors such as US interest rate hikes and signs of recession in key trade partners. The accumulation of domestic factors — currency crisis, tumbling stock market and rising inflation — is also hitting the South Korean economy hard. However, this industrial powerhouse has the domestic means to climb out of the doldrums.
Read more
Translated by Candice Chan on 8 April 2020

Faced with the sudden coronavirus pandemic that has engulfed the world, countries in East Asia are responding quite differently from those in Europe and the US. Mainland China, South Korea, Singapore, Japan and Taiwan took immediate actions to curb the spread of the disease in a relatively short time.

Despite having sufficient information and time for advance preparation, European and American countries that had only a few or no known cases at the time of the announcement of the lockdown in Wuhan, have fallen into a deeper trap than China was in two months ago. Asian countries should not gloat about this, but we must reflect on why it happened.

Now is instead the time for Asian countries to take the initiative and be the builders of contemporary world history.

Some people have begun to make comparisons from an institutional or cultural perspective, noting the different approaches taken by East Asian and European countries. This may be a useful reminder to East Asian or other Asian countries that today, in 2020, they cannot continue to be passive followers as they have too often been throughout modern history. Now is instead the time for Asian countries to take the initiative and be the builders of contemporary world history.

This pandemic will greatly change the landscape of the world, which may look drastically different when the dust settles. First of all, Covid-19 has evolved into a global public health crisis. The panic and damage caused by the epidemic, especially the humanitarian disaster that may soon take place on a global scale, is something so unusual that you would not expect to witness it in a hundred years.

The blow to the global economy may well exceed the 2008 financial crisis, and may even exceed that of history’s most severe economic collapses. Such deep impact will profoundly change the course and direction of economic globalisation, and the US which has been the main driver of this globalisation effort since the 1980s, may cease to play the main role as a result. Inevitably, this will lead to necessary transformation, which can erupt into social and political problems in many countries, posing great challenges for global and national governance.

Change is a reason for hope, but it can certainly be risky. After implementing strict isolation and control measures, production and trade in many countries have come to a standstill, and global population flow has stopped abruptly. The free flow of goods, currencies, services and people has suddenly become a thing of the past. Even if the pandemic is contained in the near future, it has already caused immeasurable economic damage, and the fact that multiple circuit breakers have been triggered in the US stock market in less than half a month is a huge warning sign.

Even without the pandemic, a process of deglobalisation at the local and regional levels has already emerged in recent years.

After the pandemic, it will be impossible to restart the engine of globalisation and restore the world to its previous state in a short time. It has even been predicted that this engine may be lost forever. In actual fact, even without the pandemic, a process of deglobalisation at the local and regional levels has already emerged in recent years, which makes future globalisation impossible to continue to operate in the same way that it has in the past.

In the face of the worsening situation, the world needs to consider three major issues: we must find ways to defeat the pandemic as soon as possible and reduce humanitarian disasters, minimise the global and national economic damage caused by the pandemic, and avoid the collapse of the international order during the global economic crisis.

The key to solving these three problems is to find a new impetus. In this respect, East Asian countries have to step to the forefront, mainly because they have acquired two obvious advantages.

The first is that, in contrast to the rest of the world that is still stuck in the outbreak stage of the coronavirus pandemic, many countries in East Asia have emerged from the pandemic mire, with the situation stabilising domestically. Few new cases have been reported in China, and the outbreaks in other East Asian countries and regions have also been largely contained. In the context of the global fight against the pandemic, the East Asian region is becoming the largest less pandemic-affected area in the world, allowing it to provide human, technical and expert assistance to the rest of the world.

The second advantage is that East Asia as a whole, is the largest economic zone in the world, and the level of economic ties among East Asian countries has reached a new high. The industrial output value of East Asia has accounted for half the world’s total, while more than half of Asia's trade volume is intra-regional.

East Asian countries need to first manage its own house, by forming an anti-epidemic community and facilitating assistance in resources and experience sharing within the East Asian region.

The Asian economy has enjoyed a high degree of division of labour and connectedness. East Asian countries have formed institutions for joint development by establishing regional cooperation mechanisms and free trade zones. Freed of wars for more than 30 years, it is also a relatively stable region that has acquired constructive experience in resolving disputes and conflicts between states.

The unsatisfactory performance of European and American countries in this pandemic indicates major problems these countries face in organising social forces and preventing crises. We cannot expect them to recover soon and become the drivers of global economic recovery. In this aspect, East Asian countries can likely be the main agents which can help take on the responsibility for lifting the world from the pandemic, stabilising the global economy and preventing the world from slipping into disorder.

However, with this intention in mind, East Asian countries need to first put its own house in order by forming an anti-epidemic community and facilitating assistance in resources and experience sharing within the East Asian region, in order to allow these countries to plan and guide the formation of a global relief mechanism.

The foreign ministers of China, Japan and South Korea recently held a special video conference and agreed to actively shoulder international responsibility, work together to meet major global challenges and maintain regular exchanges and cooperation. Such cooperation is essential and should be further expanded. While engaged in their own efforts to fight the epidemic, East Asian countries should give full play to the advantages of their strong industrial production capacity, by restoring production to provide as many goods and materials as possible to the world. It should also make timely efforts to sign the Regional Comprehensive Economic Partnership (RCEP) agreement. In the face of a common crisis, East Asia must forge unflinchingly forward against the era's challenge.

Related: Taiwan's ‘epidemic diplomacy' may invite reprisals from Beijing | Japanese academic: Battling Covid-19 is not a global match of going for gold