America has long been known as the land of opportunity for people from all over the world, not least China. As 2019 draws to a close, photo historian Hsu Chung-mao retells the stories of the first wave of Chinese immigrants to America in the 19th century, capturing how they quickly embraced the American way of life, some even accepting Christianity and celebrating Christmas. 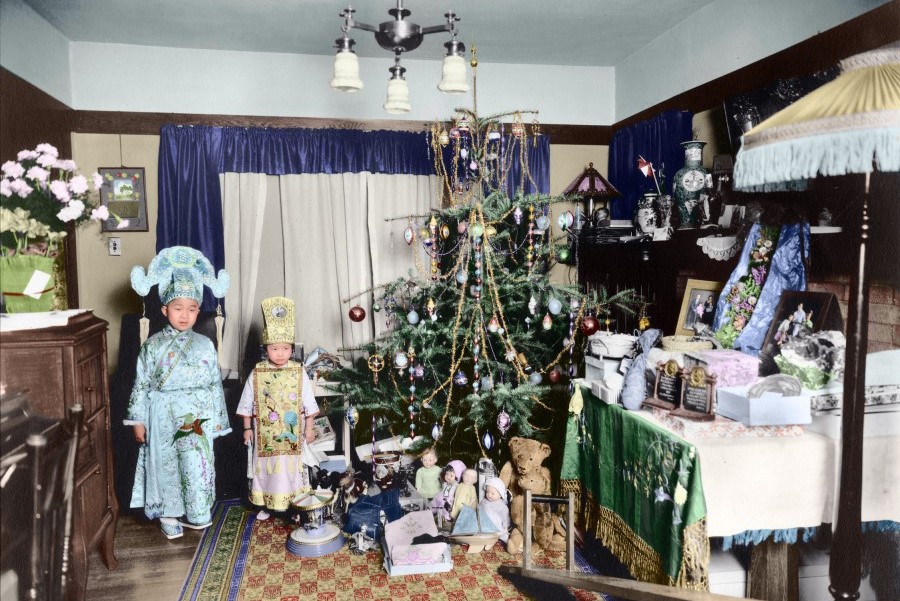 This Christmas tree in the home of early US immigrant Seid Back in the 1890s is full of decorative lights, with lots of presents below. But the children are not dressed as Santa Claus, or the three wise men visiting baby Jesus in the manger as written in the Bible, which are Western observances. Instead, we see the children quaintly dressed in Chinese-style Han clothing, reminiscent of Liang Shanbo and Zhu Yingtai in the classic Chinese story of The Butterfly Lovers.

Candice Chan - 17 January 2022
China-Russia rivalry in the Central Asian region is intensifying, with the US's departure from Afghanistan and the two countries seeking to fill the power vacuum by working within their Central Asian spheres of dominance. Can the two powers work together to foster greater regional stability or will they let their competitiveness get the better of them?
Read more
Translated by Candice Chan on 17 December 2019

In 1868, three years after the end of the American Civil War, there began a time of restoration and opening up of the American West. Convertibles full of pioneers and their families kicked up the dust en route to the central and western areas of North America. The men were fully armed, ready to do battle with any bandits they met along the way, or any Native Americans who would fight to protect their land.

A railway runs through it

The construction of the Pacific Railway, a transcontinental railroad linking America’s east and west coasts, also attracted many labourers from China. The Burlingame Treaty between China and America meant that both sides could benefit in terms of labour and trade. It was then that 17-year-old Seid Back (薛柏, Xue Bai) packed his few belongings and crossed the sea, landing in Portland, Oregon, on the American West Coast.

Born in San Wai, Hong Kong, and losing his father at a young age, Seid Back was prepared to take a gamble as a railroad worker, dreaming of fulfilling his own American Dream with a shovel and pickaxe. He and his Chinese compatriots didn’t know what the future held. Still, compared to being stuck in their homeland full of war and poverty, now they could at least hope for some opportunities.

In those early days, China was dealing with internal conflicts like the Taiping Rebellion as well as external threats like the Opium Wars. Many immigrants from Guangdong did not want to put up with the poverty in their homeland, and signed contracts to work long-term in America. They came to America to work on the railways, and sent all their money back home.

But with the explosion in Chinese immigrants came xenophobia from the locals. In 1882, the US Congress passed the Chinese Exclusion Act, while several western states also passed some racist laws, ending the first wave of Chinese immigrants.

Those who were already there made the best of it. In a strange land, faced with a harsh natural environment, tough work, the possibility of dying at any time due to accidents or disease, and having to deal with lawbreakers and racism, Seid had serious second thoughts about his railway job. Fortunately, he could cook. And so he left the Union Pacific Railway Company and started as a butler and cook in an ordinary household.

Chinese immigrants in America were usually frugal; Seid worked tirelessly and managed to save some money. He invested US$3,000 in a small general store, and became a businessman.

Initially, Seid imported uniquely Chinese products such as carpets, silk, and china, which the Americans loved. His business grew to become a contractor for a salmon cannery, and Seid became an important member of the Chinese community. At one point, he employed some 1,600 Chinese railroad workers throughout Oregon, and arranged for seasonal work for 150 to 200 Chinese men at the salmon cannery.

Jack of all trades

Another prominent businessman and influential member of Portland’s early Chinese community was Moy Back Hin (梅伯显, Mei Boxian), also known as Charley Twin Wo. He stepped on American soil with scant resources at the age of 20, becoming part of the first batch of Chinese immigrants of 1868. He also came from a humble background, and also succeeded through business.

Moy was first a labourer, then hired by a judge, who suggested he go into trading in order to succeed in America. Over the years, they became good friends, and the judge often provided sound business suggestions. Moy set up a company importing tea, rice, clothing, and firecrackers, and also exported a lot of wood and flour to China. Subsequently, Moy opened a branch office providing labour for the Pacific Railway and Southern Pacific Railway, as well as the Oregon Railway and Navigation Company. He also provided workers for the salmon canneries along the Columbia River.

With these businesses, Moy became one of the wealthiest Chinese in the American northwest, and the local newspaper called him the “Chinese millionaire of Portland”. In 1906, he was officially appointed Consul for the states of Oregon, Idaho, Washington, and Montana by the Chinese government. Given Portland’s large Chinese community and trade ties with China, the Consul headquarters was located in Portland.

Seid and Moy both became naturalised Americans before the Chinese Exclusion Act came into effect, which gave their businesses the legal status and rights of local enterprises, which in turn meant the future of their descendants was more assured.

As Asia and the West began to meet, there followed in-depth cultural exchange, as shown in fashion, food, and religion. Influenced by Western missionaries, some Chinese began attending church and listening to priests and pastors speak, and praying for God’s blessings. While there were occasional religious frictions, a growing number of Chinese accepted Christianity and began observing Christian festivals such as Easter and Christmas, along with religious activities like carolling and spreading the word of God.

In mostly Buddhist and Taoist China, the Chinese were very slow to adopt the ways of Christianity. In contrast, those who immigrated to the US found themselves immersed in a Christian society. Try as they might to hold on to their own culture, it was difficult for them to avoid the influence of US society. For example, Christmas is a time when American families get together, and a season for shopping and giving gifts. And so, even though Chinese people have their own customs such as the Spring Festival (or Chinese New Year), the immigrants integrated with the locals and joined their American neighbours and friends in celebrating Christmas.