A week into the Tokyo Olympics and the Chinese internet is already a minefield of anti-Japan sentiments. Displeasure ranges from Japan’s win over China in the table-tennis mixed doubles to perceived slights against China. By playing the nationalism card, Chinese netizens are not doing China any favours in the run-up to next year’s Beijing Winter Olympics. 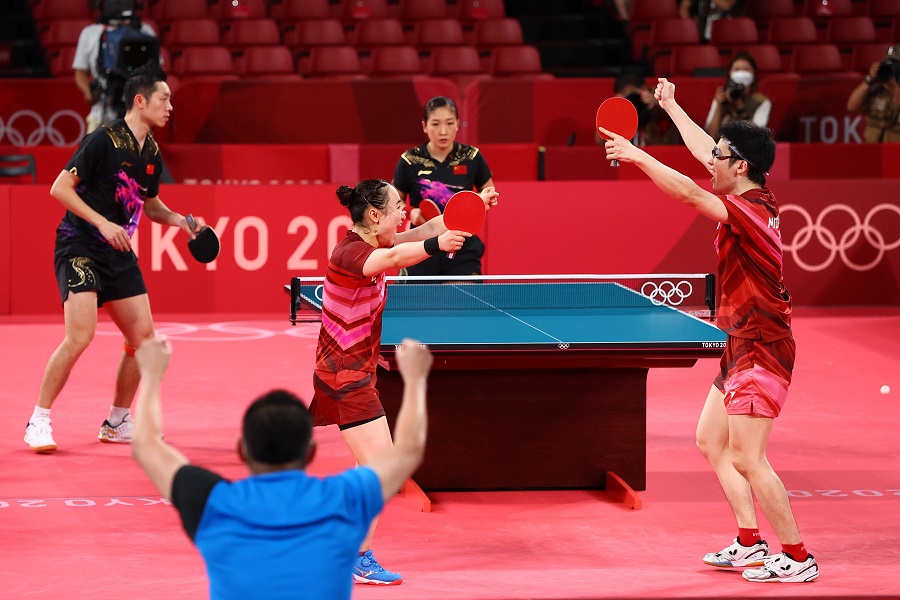 Grace Chong - 23 November 2022
US academic Wu Guo looks at the recent online furore over the mushrooming of state-run communal canteens in China and offers his views from the US. While providing food for the needy should be part of the state's responsibility, there should also be space for civil society, private enterprises and the public to play a role to create kind and healthy communities.
Read more
Translated by Grace Chong on 29 July 2021

“Bro, you better keep a low profile on Weibo for the next few days and talk less.”

After Japanese actor Yuki Furukawa posted “you watching the Olympic[s]?” on Weibo on Monday night, his fans tried to warn him to watch what he says. But it was all too late.

He posted that message right after the Japanese team defeated the Chinese pair to take the gold medal in the mixed-doubles table tennis final at the Tokyo Olympics. Netizens berated him, asking why he “intentionally did such a disgusting thing” at that point in time.

It seems that  this 33-year-old Japanese actor did not realise the severity of the situation. He posted on Weibo again, asking netizens why they were asking him to “shut up”, which triggered even stronger backlash. Although Furukawa deleted both of his Weibo posts later on and sincerely apologised for his “wrong timing”, the comments section was already flooded with attacks and criticism.

As of yesterday, he had amassed nearly 160,000 comments, out of which the popular ones were those asking him to “get out of China and go back to Japan”. Some even reposted newspaper clippings of Japanese atrocities and aggression against China, asking people to “never forget national humiliation, and to make them pay life for life”.

Less than a week since the Tokyo Olympics began, there has already been wave after wave of anti-Japanese sentiments on the Chinese internet. And this seed was sown on the day of the opening ceremony when NHK news anchor Mayuko Wakuda called the Taiwan team “Taiwan” instead of “Chinese Taipei”, which offended Chinese netizens.

“Our motherland has become powerful and can now go to her bully’s house to give them a slap in the face.” - Chinese netizen

Two days later during the Women's Gymnastics Qualification, Chinese gymnast Tang Xijing performed her routine to Jiu’er (《九儿》) — a song honouring the Chinese fight against Japanese invaders during the Second Sino-Japanese War. While this news went unnoticed in Japan, it triggered hot discussion in China. Some netizens praised Tang’s move as being very “liberating”, while some others commented that “our motherland has become powerful and can now go to her bully’s house to give them a slap in the face”.

China has dominated the table tennis sport for a long time and was always the champion of this game dubbed the country’s “national ball”. But at the current Olympics, new rules to better contain the pandemic were introduced. These include not wiping the game table with hands or blowing on the ball, which happen to be the habits of many Chinese players. The Chinese were also upset by the fact that the match playing area has been reduced by nearly 30%. Since Japan clinched the first-ever Olympic gold in table tennis, the Chinese’s anti-Japanese sentiments have been pushed to a new high.

After the match, netizens circulated images of Jun Mizutani blowing on the ball and Mima Ito wiping the game table online, protesting that the referee had favoured the host team. Even Ito’s “exaggerated facial expressions after she won a score” became a target of netizens’ displeasure. Apart from lashing out at her on her Weibo page, some netizens even climbed over the great firewall, commenting on her Instagram account (IG) that she “has no right to win the gold medal” and that “it was an undeserved win”.

This wave of anti-Japanese sentiment has even spread to well-known Japanese in other sectors. Apart from the “oblivious” Furukawa, some netizens also called for Japanese director Ryo Takeuchi — who has filmed several documentaries in China on pandemic efforts — to take responsibility for the Japanese team “flouting rules” and “NHK embarrassing China”. And Chikada Rikimaru, the Japanese member of Chinese idol group INTO1, posted a video of a dance rehearsal the same day the Japanese table tennis team won gold, only to be blasted as “effeminate”, and told to “scram back to Japan”.

Compared to the netizens who are firing on all cylinders, the Chinese Olympic athletes in Japan seem much more mild and open. After her loss, Xu Xin generously praised Ito for being “bolder and braver” with her smashes. And when questions were raised about pollution in the water at the triathlon venue possibly causing competitors to throw up, Chinese triathlete Zhong Mengying posted on Weibo to clarify that there was no problem with the water, and the throwing up was probably due to the hot weather.

...such issues that could have been argued rationally based on facts have evolved into an online pandemonium of nationalism, and detracted from a position of fairness and respectability.

To be fair, it is nothing new for the Olympics host country to come under fire. From the start, there was no lack of criticism about the Tokyo Olympics, which had a difficult time even opening amid the pandemic — insufficient pandemic efforts, poor facilities at the Olympic village, referees favouring the host country — and it was not just the Chinese athletes and public who had something to say about these problems.

On the other hand, since the pandemic broke out, China has faced growing international political and public pressure, and resentment has long been building up among the Chinese public. It is understandable that they would hope to shine in the sporting arena where skills count, and naturally, they would be very conscious of whether any rules are being broken; they would also see Japan referring to “Chinese Taipei” as “Taiwan” as politicising sports and be unhappy about it.

However, under the combined hype of online opinion leaders selling patriotism and antagonism, and social media platforms that are in the business of online traffic, such issues that could have been argued rationally based on facts have evolved into an online pandemonium of nationalism, and detracted from a position of fairness and respectability. It would seem more civilised to use fewer provocative terms like “Olympics in Hell” and “devils scram back to Japan”.

...netizens from Japan, Taiwan, Hong Kong, and even Malaysia came out in support, drowning out the negative comments by Chinese netizens and countering with even more comments such as “so China cannot lose” and “this is what a powerful country looks like”.

After Ito’s IG was flooded, netizens from Japan, Taiwan, Hong Kong, and even Malaysia came out in support, drowning out the negative comments by Chinese netizens and countering with even more comments such as “so China cannot lose” and “this is what a powerful country looks like”.

Chinese ambassador to Japan Kong Xuanyou said this month that for China, the Tokyo Olympics is not just a sporting event, but also a podium and opportunity for China to promote next year’s Beijing Winter Olympics to the world. Raising its international profile and reducing the risk of a boycott of the Beijing Winter Olympics is another important mission for the Chinese delegation, and the growing anti-Japanese fire in China will only hurt the cause.

With one-third of the Tokyo Olympics over, which direction will this nationalism take over the next ten days that remain? Will the Chinese keyboard warriors show a friendlier side and start a chapter of harmony for the Beijing Winter Olympics? This question might be as important as how many medals the Chinese athletes gather.