Kris Wu has been detained by the police in Beijing. His social media accounts are deleted from Chinese social media platforms, wiping out the star's online presence. While this is not the first time Wu is embroiled in sex scandals, it is the first time he is detained. Who are the benefactors and financial powers behind China's top celebrities like Wu? And what does this mean for China's crackdown on big capital? 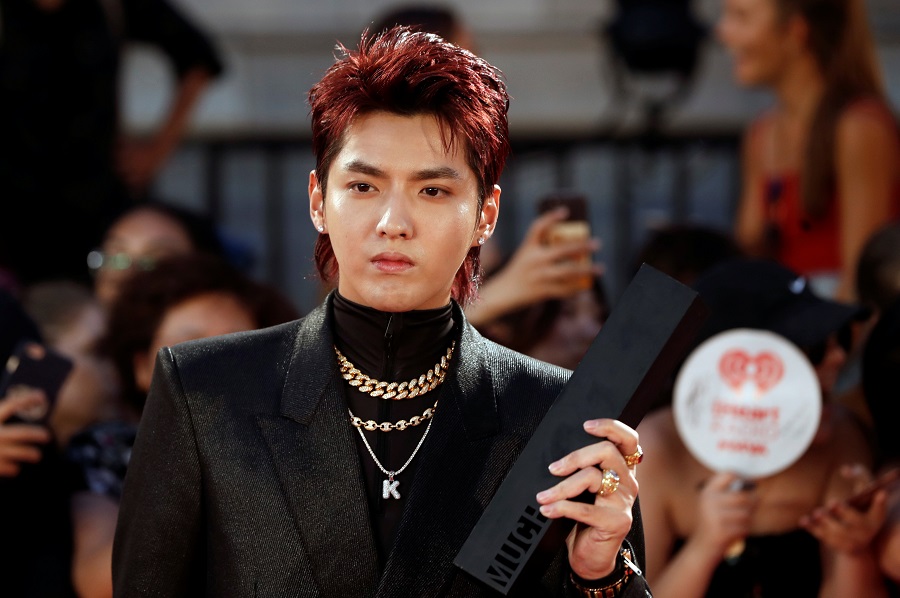 Grace Chong - 25 January 2023
With rumblings of US House Speaker Kevin McCarthy possibly visiting Taiwan in spring, Yang Danxu observes that this will not be the last we see of the “Taiwan card” being played by US politicians as they move into the second half of the current US presidency.
Read more
Translated by Grace Chong on 10 August 2021

A detention warrant from the Beijing Municipal Public Security Bureau Chaoyang Branch concluded the Kris Wu rape allegations and brought the curtain down on his showbiz career. His accounts were deleted from Chinese social media platforms, wiping out his online presence. It is unthinkable that just a few months ago, Wu was still an A-lister and ranked eighth on the 2020 Forbes China Celebrity 100 list.

Though a star, Wu’s singing, dancing, acting and composition skills are nothing to shout about. It is also not the first time that allegations of this nature have been made against him. Prior to the current incident, he appeared impervious to negative publicity, and continued to land the biggest roles and endorsement deals.

One cannot help but wonder about the benefactors and financial powers that propelled Wu to his previous heights. Some clues can be gleaned through examining the development of Wu’s showbiz career after he returned to China.

Two months before Wu announced his exit from EXO, his mother, Wu Xiuqin, registered a company, Ace Unit Culture Media (凡世星睿文化传媒) in Hong Kong. In 2015, the Chinese name of the company was shortened, leaving out the Chinese characters “凡世”. In April of the same year, Wu’s cousin, Wu Lin, registered the Shanghai Fanshi Culture Media Studio (上海凡世文化传媒工作室) in China. Hence, the actual financier of Wu after his return to China was Ace Unit Culture Media, which was founded by his mother.

A superstar with a huge following

Wu’s return to China to further his entertainment career coincided with the opportunity of a lifetime. Back in 2014, Chinese showbiz was not as prosperous as it is today, and there were only a few idols. The return of four former EXO members to China, with Wu leading the way, filled the void and they became the poster boys of the industry.

Within a month of returning to China, Wu started the next phase of his career by landing the male lead role in Somewhere Only We Know (《有一个地方只有我们知道》) directed by Xu Jinglei. According to reports by the news website, Chengdu.cn (红星新闻), the script for the movie was written by Wang Shuo, an influential Chinese novelist and scriptwriter known as the "soul of the Beijing gang", while the film director, Xu, is a darling of the showbiz circle. Following this, in 2015, Wu acted in Mr. Six (《老炮儿》), a movie produced by Chinese famed director Feng Xiaogang also known as the "big brother of the Beijing gang". With that, it could be said that Wu was accepted into the Beijing gang.

In June 2016, Wu was embroiled in a sex scandal when Xiao Gna (小G娜), an internet celebrity, went public with intimate photos of her and Wu, striking a devastating blow to the "pure and sincere" image that Wu had created. However, Wu's management company Ace Unit Culture Media soon reached an agreement with Sparkle Roll Media (耀莱影视文化传媒) for the latter to assume full agency and responsibility of Wu’s commercial engagements (in advertising and filming) in China, making the company Wu’s new financial backer.

Qi's investment portfolio was not limited to the Sparkle Roll companies. He also owned a 16.35% stake in and was the second biggest shareholder of Cultural Investment Holdings (文投控股), the parent company of Sparkle Roll Media.

According to reports from the AI Finance & Economics and the 21st Century Business Herald, both Cultural Investment Holdings and Sparke Roll Media have close ties to showbiz titans like Jackie Chan and Feng Xiaogang. In 2010, Jackie Chan partnered with Qi to set up many Jackie Chan Cinemas in China. Before Sparkle Roll Media was set up, Jackie Chan had his own company, Jackie and JJ Productions (成龙影业). Being smaller in scale, the company was incorporated into Sparkle Roll Media subsequently.

It is also worth noting that the Beijing State-owned Cultural Assets Supervision and Administration Office (北京市文资办) which has a controlling stake in Cultural Investments Holdings, comes directly under the State-owned Assets Supervision and Administration Commission of the People’s Government of Beijing Municipality (北京国资委). This makes Cultural Investments Holdings a state-owned asset and high-end media platform well-stocked with celebrities.

With big capital in the game, the tide then turned in favour of Wu as many celebrities came forward to back him. On the night that the agreement (between Ace Unit Culture Media and Sparkle Roll Media) was signed, Feng Xiaogang, who worked with Sparkle Roll Media, defended Wu in public when he attended the Jackie Chan Action Movie Week. When asked about Wu’s scandal then, Jackie Chan said, “Every celebrity has negative publicity, even me, all these will come to pass.”

Following this, Xiao Gna was targeted by netizens who accused her of sensationalism and trying to use the incident to become famous, while Wu’s showbiz and commercial activities were not affected. Eventually, the incident faded away from public consciousness.

In 2018, the backing that Wu received from Qi weakened. A downturn in the entertainment industry and the dimming prospects of Jackie Chan movies caused Jackie Chan Cinema to report losses of 49.73 million RMB (or S$10.40 million).

Qi who used to be a key player in cultural circles was listed as a Dishonest Person Subject to Enforcement (失信被执行人) by local courts in Beijing, Tangshan, Chengdu, and Hangzhou etc. due to loan disputes. As a result, he faced restrictions on high-end consumption and the shares he owned were frozen.

2018 was also a Waterloo year for Wu’s acting career. In the entire year, he only acted in one film, Europe Raiders (《欧洲攻略》). Even though he starred alongside the celebrated actor, Tony Leung, the movie only brought in 153 million RMB in box office takings and a very low Douban rating of 3.5 (out of 10). In 2019, Wu did not act in any movie, and he only acted in Guo Jingming’s L.O.R.D: Legend of Ravaging Dynasties 2 (《冷血狂宴》) in 2020.

Kris Wu could not have such a huge following without the support of major Chinese video-streaming platforms. In June 2017, Wu became part of The Rap of China (《中国有嘻哈》) show produced in-house by iQiyi. Wu’s oft-used phrase “Do you freestyle?” (你有freestyle吗) became a catchphrase in China. Subsequently, iQiyi deepened its partnership with Wu by inviting him back for its productions, The Rap of China 2019 (《中国新说唱2019》) and Fourtry (《潮流合伙人》).

Another video-streaming giant that worked with Wu was Tencent Video. On 6 February, Tencent Video announced its new line-up of seven spokespersons, which included Wu. Wu also participated in the variety shows Blk 946 (《潮玩人类在哪里》) and Chuang 2020 (《创造营2020》) produced by Tencent Video. He also played a leading role in L.O.R.D: Legend of Ravaging Dynasties 2, a Tencent Video exclusive.

Capitalising on his fame

Acting and product endorsements only contributed to a part of Wu’s income. He also capitalised on his fame and pursued other business interests through setting up companies and investments.

At the end of 2018, Wu worked with a Xiaomi corporate affiliate to launch his personal brand, A.C.E. As the brand director, general manager, and creative director, Wu owned a stake of 45% in the brand. But less than a year later, Wu withdrew from A.C.E.

According to reports by 21Tech, an asset management and consulting firm, Wu Xiuqin and Wu Lin played major roles in helping Wu capitalise on his fame. Ace Unit Culture Media that Wu’s mother set up in Hong Kong back in 2014 is still a registered company. It funded many of Wu’s other companies to generate revenue for him and his family. Wu’s cousin is the legal person of the Beijing Fanshi Culture Media (北京凡世文化传媒) that owns Wu’s studio. In addition, Wu Lin is also the legal representative for 11 other companies. Out of these 11, five film and media companies have since been deregistered.

Since 2014, Wu has endorsed more than 40 brands. Following the Du Meizhu incident, brands such as Kans, Bestore, Tencent Video, Lancome, Liby, Bvlgari, Porsche, L’Oreal, and Louis Vuitton have terminated their partnerships with him.

Looking at the trajectory of Wu’s career, his starting point and the support he received were unimaginable to most people, but he made a total mess of it. His downfall triggered a review of the big capital lurking behind him. While it is natural for capital to seek profit, short-sighted behaviour that aim to profit regardless of everything — including the professional abilities and moral standards of celebrities, society's values, and even the law — is unacceptable. And these are no longer just about the pursuit of capital.

Related: Why China is cracking down on big capital | Can strict regulations save Chinese youths from gaming addiction? | China to impose strict measures on tuition centres to allay anxiety over education | Faster, higher, stronger: China's kids pushed to breaking point