Soong Mei-ling and the flying tigers: When China and the US fought shoulder to shoulder

No one would deny that the US and China are not the best of friends at the moment. But there was a time ⁠— and not so long ago at that ⁠— when these two countries came together in goodwill and support. Historical photo collector Hsu Chung-mao brings us back to the WWII period, when this seemingly improbable state of affairs was a reality. 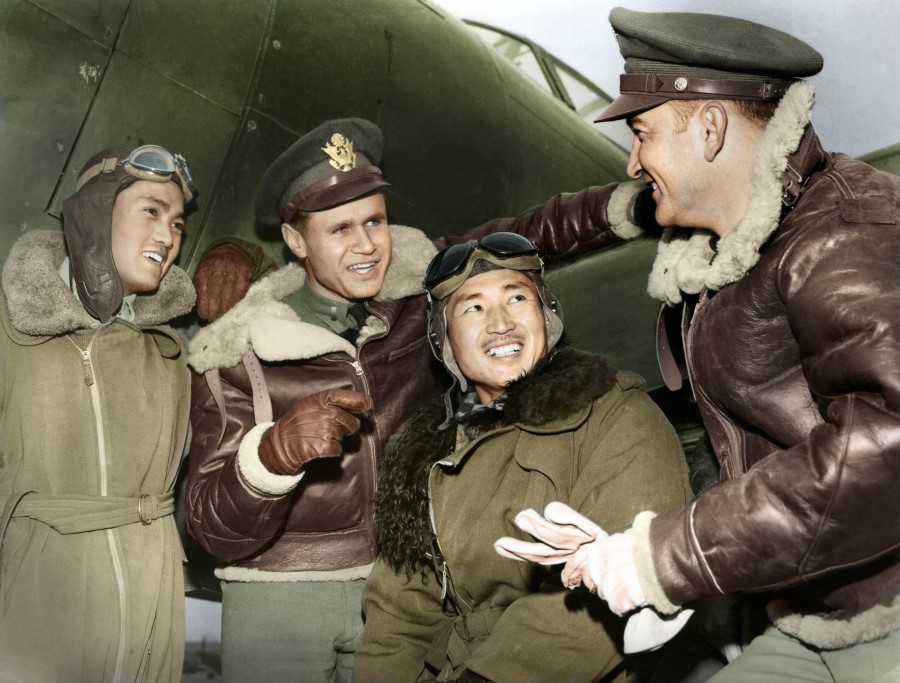 Candice Chan - 30 January 2023
A mall in Shenzhen came under fire for putting up white lanterns with black text as part of its Chinese New Year decorations, while an “ugly” rabbit-shaped light decoration was removed from another mall in Chongqing. Academic Zhang Tiankan muses on tradition and innovation, and the evolution of traditional decorations.
Read more
Translated by Candice Chan on 9 April 2020

19th-century China was a victim of imperialism and colonialism, and the US as a rising Western power was in fundamental conflict with China. But during World War II, China and the US fought shoulder to shoulder against the invasion and expansion of the Fascist Axis powers — that is, Germany, Italy, and Japan.

Both governments were close, and interaction between both peoples reached a new high. Americans had a good impression of China and its people, not only because they had to work closely against a common enemy, but also because their society and culture were compatible in some ways.

In the larger context, China was a disadvantaged victim of the world powers, and civil church groups in the West, including the media, were mostly sympathetic towards the Chinese.

In 1900, China was in the midst of the Boxer Rebellion. The Western powers and Japan formed the Eight-Nation Alliance and seized Beijing, after which they signed the Boxer Protocol with China, where China had to pay large reparations and allow the powers to station troops in Beijing. China faced major humiliation as it lost its sovereignty. But while the US was one of the world powers in the Alliance, the Chinese people had quite a good impression of it because it did not show ambitions of taking over China’s land. It also acceded to the Chinese government’s request to return the reparations it received and even used part of it towards education in China, including sponsoring Chinese students to study in the US.

US churches established schools throughout China. Their charitable work in helping the poor gained the goodwill of the Chinese people. In the larger context, China was a disadvantaged victim of the world powers, and civil church groups in the West, including the media, were mostly sympathetic towards the Chinese.

In 1937, Japan invaded China, resulting in many casualties and homeless among the Chinese. Japanese troops entered major Chinese cities, leading to a clash with China-based Western authorities, resulting in greater Western sympathy and support for China. Among them, the US, which was the most influential in the West Pacific, was the first to extend a helping hand to China.

In 1937, before China was dragged into all-out war, Japan’s momentum of invasion was growing, but in view of diplomatic ties with Japan, the world powers dared not help China directly. Ironically, one country that did work with China and help it build a new army was the similarly isolated Nazi Germany. But given the constantly changing world situation, after the Second Sino-Japanese War broke out, Germany developed friendly relations with Japan and distanced itself from China.

The only country that clearly supported China was the Soviet Union, which was in geopolitical conflict with Japan in Northeast Asia. They sent the Soviet Volunteer Group from the Soviet Air Forces to fight the Japanese planes, and played an important role in the first year of China’s war efforts.

Subsequently, it was the US that took over from the Soviet Union in helping China with its war efforts. Initially, it was a semi-secret, and the one who made it happen was Soong Mei-ling, the wife of Chiang Kai-shek, the first President of the Republic of China.

Madame Chiang, as she was popularly known, was born in Wenchang, Hainan, in 1897, but grew up in the US. In 1908, Mei-ling and her older sister Ching-ling went to the US to study. Mei-ling entered Wellesley College in 1913, graduating four years later. She spoke and wrote English fluently, and was a devout Christian. Given her background, she was naturally close to US society, and was easily accepted by Americans as part of the larger family of immigrants to the US.

Madame Chiang invited American military aviator Claire Lee Chennault to help develop China’s air power. Chennault went all over the US spreading the word about China’s war efforts, and with the help of Chinese and American stakeholders, US President Franklin Delano Roosevelt approved a secret agreement between China and the US to provide China with the latest P-40 bombers, and allowed US troops to go to China and fight the Japanese as retired or reserve troops.

China and the US came together to form the Chinese-American Composite Wing (Provisional). With a combined strength that was greater than Japan’s forces, they managed to turn the tide of the war.

On 1 August 1941, the 1st American Volunteer Group (AVG) was established in Kunming, and won its first battle in December that year. As shark heads were painted on the planes, and they looked like tigers from a distance, people called them “Flying Tigers”. The insignia was designed by Roy Williams and Henry Porter of Walt Disney Studios, making it a little legend in China-US cooperation during the war.

After the war in the Pacific broke out in December 1941 during World War II, the AVG was reorganised several times and became the 14th Air Force. China’s air force sent pilots to India and the US for training and these US-trained pilots became the backbone of the Chinese air force. Subsequently, under Chennault’s suggestion, China and the US came together to form the Chinese-American Composite Wing (Provisional). With a combined strength that was greater than Japan’s forces, they managed to turn the tide of the war.

Each of her (Soong Mei-ling's) passionate speeches was an important communique documenting the global war against fascism, while her charm was hard to match.

Then there was Madame Chiang’s visit to the US on 11 November 1943 as a representative of Chiang Kai-shek, which was also an important part of WWII history. Besides meeting US President Franklin Roosevelt and his wife and speaking in Congress, Madame Chiang also visited the Chinese living there and called on them to support China in its war against Japan. She also spoke at several public venues, recounting to the American public about China’s plight and Japan’s ambitions.

Madame Chiang did not mince her words about the painful price of war among Chinese troops and civilians, and the need to support China. Each of her passionate speeches was an important communique documenting the global war against fascism, while her charm was hard to match.

There is also the story of Henry Robinson Luce, who was born in Shandong in 1898 and grew up to be the founder of Time, Fortune, and Life magazines in the US. These publications became models for magazine reporting in the US, and Luce was described by Winston Churchill as one of America’s most influential people.

These posters shaped Americans’ image of Chinese, and it was during this time that the Chinese Exclusion Act was removed after over 50 years.

Luce’s parents had gone to China as missionaries and were closely associated with the place. Henry Luce spent his youth in China, and naturally felt deeply for it. When the war broke out, Life magazine followed war events closely and did in-depth reports about the hardships faced by the ordinary Chinese, and was the first Western media to expose the Nanjing Massacre. The media he founded strongly advocated that the US should support the Chinese government against the Japanese. Those reports had a deep influence on public opinion in the US, and quickened US assistance to China.

In February 1941, Henry Luce established the United China Relief and invited well-known artists to draw posters calling on Americans to support China. These posters shaped Americans’ image of Chinese, and it was during this time that the Chinese Exclusion Act was removed after over 50 years.

In short, the WWII period marked the era, beyond any point in the 50 years before and after, that China-US relations were at their closest. When China and the US were faced with a strong opponent, they could embrace each other and work closely to their greatest benefit. This was not just a strategic agreement, but there was also a natural integration of cultural and social values.

Soong Mei-ling in the US

Source: The US National Archives and Records Administration