US academic Zhu Zhiqun opines that conditions in the US are becoming increasingly unfavourable for Chinese and Asian Americans. In particular, the current toxic environment and pressure on US institutions to clamp down on Chinese students are undoing decades of goodwill generated from people-to-people exchanges. Will the authorities realise that soon enough and make a U-turn? 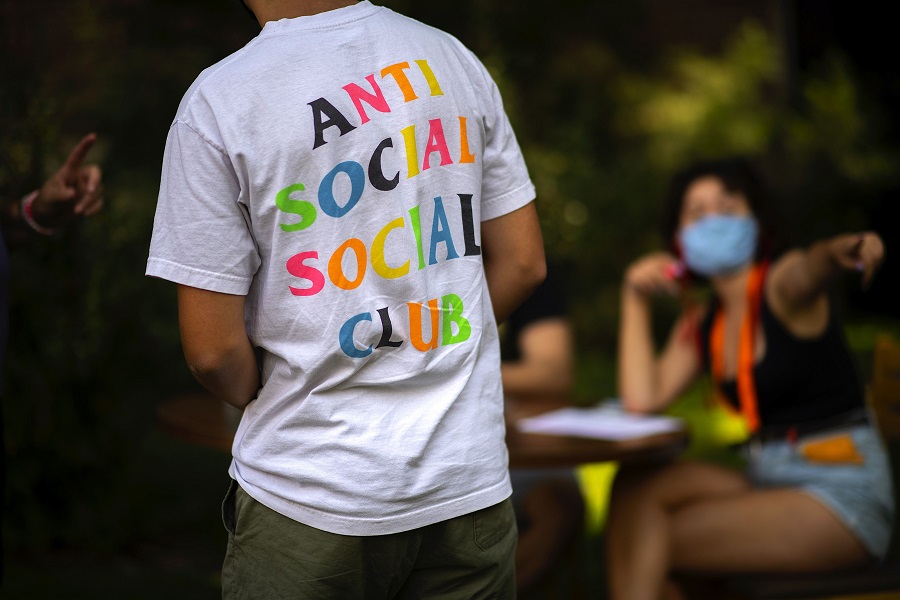 An incoming freshman checks into his campus dormitory at University of Colorado Boulder on 18 August 2020 in Boulder, Colorado. (Mark Makela/Getty Images/AFP)

Grace Chong - 2 August 2022
Taiwanese commentator Chen Kuohsiang believes that China’s economy is under threat, with the unravelling of intertwining issues in the financial industry, property sector and government finances that cannot be easily resolved. How will China boost its investment-led economy, push down unemployment rates, and regain consumer and investor confidence?
Read more
Translated by Grace Chong on 15 September 2020

The US, long-held as the beacon of hope and “a city upon a hill” by people around the world including generations of Chinese students, is increasingly viewed as an unsafe and unwelcoming place. Unsafe due to the Trump administration's failure to control Covid-19 and unwelcoming due to recent rise of racism and anti-China rhetoric and policies.

As a Chinese saying goes, when the upper beam is not straight, the lower beam will be crooked (上梁不正下梁歪).

The US has been leading the world in both the infected cases and the number of deaths from the coronavirus since March 2020. By early September, over 6.3 million Americans have been infected, and over 190,000 Americans have died.

Despite repeated recommendations from medical professionals and the Centers for Disease Control and Prevention (CDC) to wear facial masks as an effective way to protect oneself and others, many freewheeling Americans, particularly supporters of President Donald Trump, still only grudgingly wear them or do not wear them at all. Trump himself is seldom seen wearing a mask in public. As a Chinese saying goes, when the upper beam is not straight, the lower beam will be crooked (上梁不正下梁歪).

The Trump administration has blamed others including China and the World Health Organization (WHO) for its failure to contain the pandemic in the US. As a result of its poor performance, the virus is nowhere near being under control in the US. There is little hope to return to normal life anytime soon.

Anti-Asian and anti-Chinese racism on the rise in America

In the midst of the Covid-19 pandemic, verbal and physical attacks on Asian Americans have been on the rise. More than 2,500 such attacks have been reported from mid-March to early August, according to Stop AAPI Hate, a national coalition that has tracked anti-Asian discrimination amid the Covid-19 pandemic. Undoubtedly, the anti-Asian and anti-Chinese racism in America has been partially fueled by Trump administration officials’ irresponsible and intentional use of “Chinese virus” or “kung flu”.

In addition to the global health challenge and rise of racism, the Trump administration has launched a concerted campaign against the alleged Chinese espionage in the US. The US Department of Justice and law enforcement have stepped up efforts to investigate intellectual property theft cases involving China and to screen Chinese scholars and students at airports for suspected espionage. US border agents carried out 1,147 searches of Chinese nationals’ electronic devices in 2019, recording a 66% increase from the previous year, according to data obtained by the SCMP. The total number of searches conducted on people of all nationalities rose only 23% over the same period.

Educational and cultural exchanges at risk

The poisoned political climate in Washington has made it difficult to maintain normal educational and cultural exchanges between the US and China. On 18 August 2020, US under secretary of state Keith Krach issued a letter to the Governing Boards of American Universities to seek their assistance “in an effort to safeguard US technology and institutions, and to ensure our national and economic security remain safe and free from foreign interference.” He warned American universities and colleges against the “serious challenge brought on by the authoritarian influence of the Chinese Communist Party (CCP).”

The University of North Texas (UNT) made news by abruptly announcing on 26 August that its exchange programmes for 15 Chinese scholars who received funding from the Chinese government-supported Chinese Scholarship Council had been terminated. Losing their visa status, these Chinese scholars would have to leave the country as soon as possible.

The severity and suddenness of the decision caused an uproar in the UNT community. Thousands of faculty, staff, students and alums have petitioned the university leadership to rescind the decision and specify the reasons behind it, but to no avail so far. Many called it racist and politically-motivated. The UNT decision sends a chilling message to Chinese students and scholars who wish to come to the US, further damaging the already strained relationship between the two countries.

Until the UNT gives a full and convincing account of the reasons behind its decision, one can only speculate whether the decision was politically or financially-driven.

The UNT case appears to be isolated, but to a large extent it reflects the hostility between the US and China in the Trump era as well as the heavy pressures US institutions are facing from an anti-China administration in Washington.

In an email to faculty members following the initial announcement, UNT administrators said the action was “based upon specific and credible information following detailed briefings from federal and local law enforcement,” according to the university’s newspaper North Texas Daily. But no further information was revealed “due to the sensitive nature of this situation.”

Until the UNT gives a full and convincing account of the reasons behind its decision, one can only speculate whether the decision was politically or financially-driven. For example, one wonders whether the UNT is attempting to pave the way for receiving state and federal funding. The UNT faced some financial problems a few years ago, though then Chancellor Lee Jackson said the financial woes were not “long-lasting or permanently damaging”. It is unclear whether UNT’s recent decision is related to its financial status.

Secretary of State Mike Pompeo recently said that he hoped that all the remaining dozens of Confucius Institutes in the US would be closed by the end of the year.

Republican Senator Ted Cruz from Texas introduced legislation in the US Congress in 2018 to counter “Chinese espionage” on American campuses. “Communist China is infiltrating American universities to meddle with our curricula, silence criticism of their regime, and steal intellectual property including sensitive dual-use research,” said Cruz in a Washington Post article.

Cruz also authored an amendment to a US military spending bill preventing an American university with a Confucius Institute from receiving funding from the Department of Defense. Under pressure from him and Republican Senator Marco Rubio from Florida, colleges in Texas, Florida and other states have closed the Confucius Institutes and other programmes with ties to the Chinese government on their campuses in recent years. Secretary of State Mike Pompeo recently said that he hoped that all the remaining dozens of Confucius Institutes in the US would be closed by the end of the year.

“Wuhan? Well, let me get my mask on,” The professor said with a slight laugh.

Thankfully, not all American schools have turned hostile to students from China or academic exchanges with China. And many have maintained a zero-tolerance policy toward racism.

A professor at the University of Missouri was relieved of teaching duties this semester after a class conversation with a student. In a video posted online, the professor asked if any students were from outside the US. One student replied that he was from China. “Actually, Wuhan,” the student said. “Wuhan? Well, let me get my mask on,” The professor said with a slight laugh. The professor later apologised saying the reference was meant as a joke, but many students found the comment racist and xenophobic.

Syracuse University placed a professor on administrative leave in August because the professor referred to the coronavirus as the “Wuhan flu” and “Chinese Communist Party Virus” in the syllabus. Syracuse’s announcement reads: “The derogatory language used by a professor on his course syllabus is damaging to the learning environment for our students and offensive to Chinese, international and Asian-Americans everywhere who have experienced hate speech, rhetoric and actions since the pandemic began.” Syracuse University reaffirmed its commitment to being an anti-racist community and promised to take swift action to confront bias and hatred.

At a time when America is promoting diversity, equity, and inclusion (DEI) at schools and in workplaces, all of us must fight racism, bigotry, and xenophobia. The US must restore its global leadership and soft power and remain a safe and welcoming country.

As a consequence of the Trump administration’s anti-China policies, many American universities and colleges will lose the talents from China, who not only enrich academic vibrancy and diversity on American campuses, but also contribute to school revenues and local economies.

The Trump administration’s sweeping “espionage” claims against Chinese scholars and students are unfair, senseless, baseless and discriminatory. Its foolhardy policies such as terminating the Fulbright programs in China and Hong Kong are short-sighted and damage America’s long-term interests. Such misguided decisions, together with Trump’s many other irrational policies including withdrawing from the WHO and the Paris Agreement on climate change, will hopefully be reversed by a more sensible leader in the White House.