14 May 2021
By David Ng
Commentator/columnist

Even as China embarks on various infrastructure projects, how many of these projects are actually useful, or bring real benefits to the people they are supposed to serve? Are all of these projects truly worth the money and effort invested? Commentator David Ng takes a closer look at a "white elephant" tram system in the Greater Bay Area and considers the issues involved. 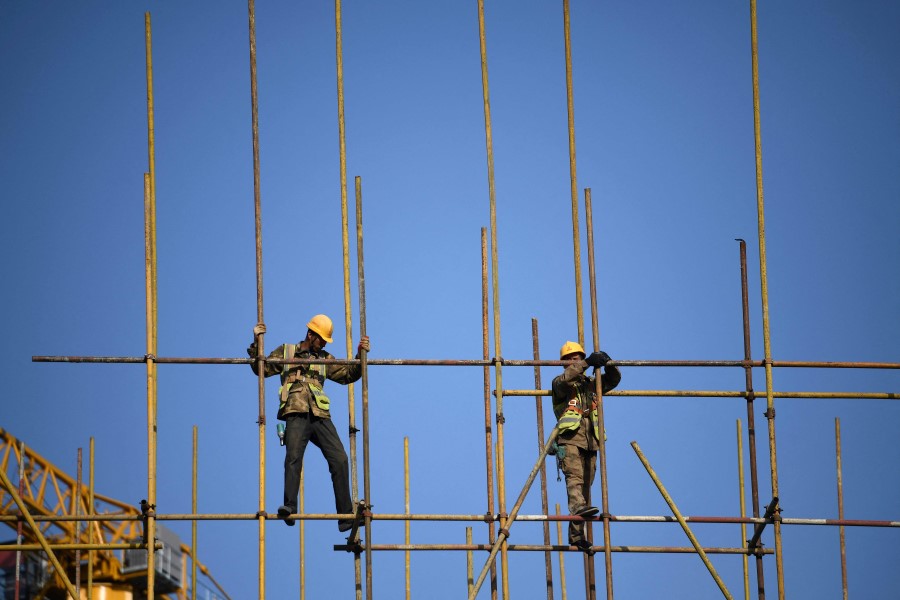 The Chinese government has made efforts to curb the number of white elephant projects in China. In this photo, workers balance on scaffolding at a construction site in Beijing on 14 April 2021. (Photo by Noel Celis / AFP)

Candice Chan - 25 January 2023
While the Americans have made noticeable progress in their “pivot” to Asia, the crux of successful regional engagement rests on Washington’s ability to work with and around China’s indisputable links and influence in this part of the world, while managing its own relationship with Beijing.
Read more
Translated by Candice Chan on 11 May 2021

Line 1 of the Zhuhai tram system cost 2.6 billion RMB and stretches for 8.9 kilometres skirting the commercial area, terminating at a newly developed residential area. Along the way, it does not connect with other modes of public transport.

Zhuhai had planned to develop a few more tram lines, and there was even talk of building a subway system. But for some reason, construction of Line 1 did not go smoothly. Work began in 2013 but it only began operations in 2017, which is not the “speed of China”.

And then, after three and a half years, it stopped running in January this year. Passenger numbers were only 5% of the projected volume, and annual ticket revenue was just about one million RMB. The government’s average annual subsidy was about 44 million RMB, with depreciation costs of 47 million RMB, for a total of 91 million RMB. With such heavy losses, the only way was to stop operations — but the project is still depreciating.

This is not the only “white elephant” infrastructure project in China. The Xijiao and Yizhuang lines on the Beijing tram network are doing slightly better than the Zhuhai tram line, but passenger volume is still not ideal.

Several other places such as Hefei, Changsha, Chengdu, and Guiyang are also planning or developing tram projects. And besides trams, there are other infrastructure projects around China that have not brought the desired economic and social benefits.

Is a bubble that does not burst really a bubble?

China’s socialist market economy has allowed the government to plan according to its vision, invest in infrastructure, expand the scope of investments and improve construction efficiency.

Infrastructure projects that bring no economic benefits and no social benefits are obviously a waste.

Did the Line 1 tram in Zhuhai meet people’s needs? Yes, but few actually benefited. There were too few passengers, which led to heavy losses and its eventual closure. And as the rail occupies two vehicle lanes, some people have suggested quickly removing the rails.

Infrastructure projects that bring no economic benefits and no social benefits are obviously a waste.

And yet, a tram system is far cheaper than a subway system. Dividing the investments on Zhuhai’s Line 1 tram over four years, that amount is only 0.39% of Zhuhai’s GDP in 2013, the year the rail was laid, and 3.3% of public budgetary income for that year.

Given this “affordability”, it is easy to see why many local governments in China have made the same investment decision. And so, in March 2021, the National Development and Reform Commission released its opinions on improving rail planning and construction. It proposed a ban on local governments’ unruly building of subways and light rail systems, in the name of constructing intercity and suburban railroads.

China’s way of suppressing the bubble

Infrastructure that brings no benefits can lead to false market demand. While projects are being constructed, developers need to purchase equipment and manpower; property investors would also be enticed to invest in surrounding property projects, thus stimulating social consumption. This would in turn build up GDP and be a feather in the cap of the government officials in charge of the projects.

However, white elephant projects do not lead to reasonable social benefits. And if the outlay is greater than the returns, continued operations will add to losses; even if operations are ended, spreading out the depreciation and losses will also lower the GDP for years to come. And so, from various viewpoints, it is an infrastructure bubble.

Regulations and interventions that deviate from the capitalist market economy have prevented China’s localised bubbles from blowing up and seriously impacting the Chinese economy.

Over the past 40 years, China’s economy has seen sustained growth and growth volatility has also been gradually reduced. So far, localised bubbles such as the infrastructure bubble have not led to a systemic financial crisis, for two reasons.

First, the economic environment. With sustained economic growth comes high interest in investment for social benefits, which can easily lead to a bubble forming. But on the other hand, higher incomes can boost future demand, and the bubbles formed in the real economy can be easily controlled and suppressed to the point that they disappear.

Second, risk management. That is, the government proactively intervenes in the speculative activities of the market rather than allowing it to self-correct. As mentioned above, the National Development and Reform Commission has set restrictions on local governments constructing new subways and light rail systems, and laid down rules that housing is only for living in and not for flipping. Regulations and interventions that deviate from the capitalist market economy have prevented China’s localised bubbles from blowing up and seriously impacting the Chinese economy.

However, if economic regulators do not promptly identify areas of risk and possible dangers, it is also possible that bubbles can grow bigger, creating a “mother of all bubbles” that can blow up the economy.