Following former Japanese Prime Minister Shinzo Abe’s death, the pro-constitutional amendment camp retained a majority during the upper house election, marking a step forward for the revision of Japan’s post-war constitution. Nevertheless, Japan will still need to approach the matter with caution to avoid damaging the already delicate relations with the US and China. Zaobao associate editor Han Yong Hong shares more on the issue. 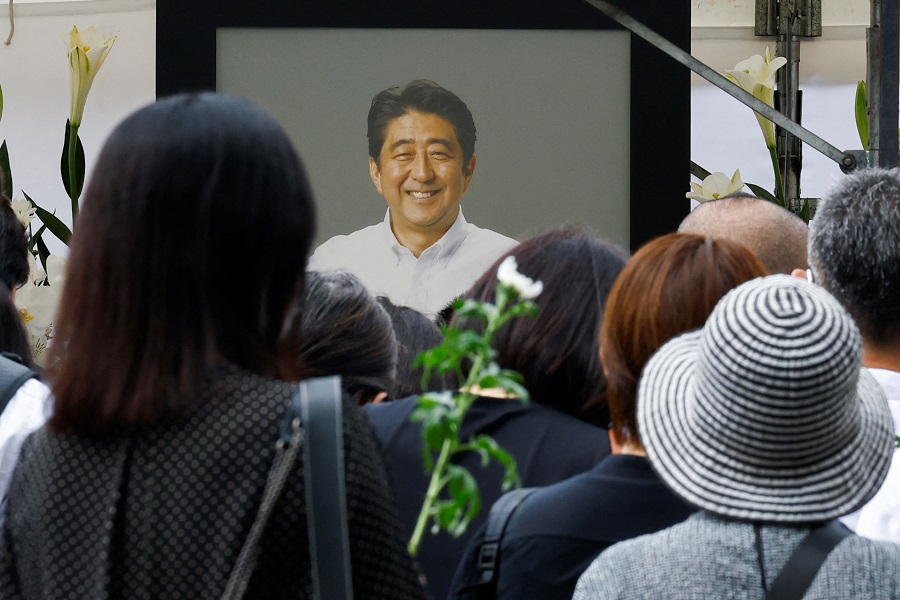 People gather to offer flowers at Zojoji Temple, where the funeral of late former Japanese prime minister Shinzo Abe, who was shot while campaigning for a parliamentary election, will be held, in Tokyo, Japan, 12 July 2022. (Kim Kyung-Hoon/Reuters)

Grace Chong - 23 November 2022
US academic Wu Guo looks at the recent online furore over the mushrooming of state-run communal canteens in China and offers his views from the US. While providing food for the needy should be part of the state's responsibility, there should also be space for civil society, private enterprises and the public to play a role to create kind and healthy communities.
Read more
Translated by Grace Chong on 15 July 2022

After the tragic assassination of Japan’s former Prime Minister Shinzo Abe, Taiwan Vice-President William Lai Ching-te made a private visit to Tokyo on 11 July to attend the funeral service at Abe's residence, making him the highest-ranking serving official from Taiwan to visit Japan in 50 years.

Beijing “lodged stern representations” to the Japanese side about Lai’s visit and criticised Taiwan for engaging in “political manipulation and [seeking to] benefit politically by taking advantage of the incident”.

The late Abe was known for his pro-Taiwan stance and had been friends with many Taiwanese politicians, including Lai. After stepping down, Abe said in late 2021 that “a Taiwan emergency is a Japanese emergency, and therefore an emergency for the Japan-US alliance”, and warned Beijing never to “have a misunderstanding in recognising this”. For Taiwan’s pan-Green camp, Abe was definitely “Japan’s most pro-Taiwan leader”.

Some analysts believe that the approval for Lai’s visa to enter Japan was Kishida’s personal decision. It is also a signal from Kishida that Japan’s pro-Taiwan stance will remain unchanged after Abe’s passing.

On the other hand, while many expect Lai to be the next Taiwan president, he is not incumbent Taiwan President Tsai Ing-wen’s preferred successor. The fact that Kishida extended such courtesy to Lai through “funeral diplomacy” is a rare opportunity for him to win more exposure and support, and thus “gain votes” in advance.

Some worry that the Kishida administration will seize the opportunity to fulfil Abe’s legacy and then go on to resurrect Japanese militarism.

However, Taiwan-Japan relations are not the top concern of the mainland Chinese. They are instead focused on whether strong sympathy for Abe’s sudden assassination would bolster the rise of right-wing forces in Japan, and hasten the revision of the post-war constitution, which is also Abe’s lifelong ambition.

Some worry that the Kishida administration will seize the opportunity to fulfil Abe’s legacy and then go on to resurrect Japanese militarism.

Notably, during the upper house election held after Abe’s death, the four parties that support the constitutional amendment retained a two-thirds majority, crossing the threshold needed to revise the post-war constitution.

According to Japanese regulations, constitutional revisions need to be backed by a national referendum and the process would take at least one year. Since there are no major national elections in Japan for the next three years, Kishida has these “golden years” to push for a constitutional amendment.

... the revision of the constitution is in fact not crucial.

But of course, this is easier said than done. And besides, the revision of the constitution is in fact not crucial.

Third, many people have misunderstood that Kishida and Abe belong to the same faction, but in fact, Kishida belongs to the moderate faction and he himself is being restrained by Abe’s faction, the largest faction within the Liberal Democratic Party (LDP).

While Kishida said after the upper house election that he would “like to push forward efforts that would lead to the proposal [of a revision] as soon as possible”, he could just be paying lip service.

... even without changing the constitution, Japan is not hindered from rolling out new military laws

Changing the constitution means amending the constitution of peace that the US drew up for Japan after the Second World War, in particular the binding words in Article 9, which states that the Japanese people “forever renounce war as a sovereign right of the nation and the threat or use of force as means of settling international disputes”, that “land, sea, and air forces, as well as other war potential, will never be maintained”, and “the right of belligerency of the state will not be recognized.”

The LDP’s discussion over revising the constitution is focused on maintaining land, sea and air forces and other war potential, and the right of belligerency. To put it plainly, the LDP wants to include the Japan Self-Defense Forces (JSDF) in the constitution and legitimise its constitutional status.

Notably, the powerful JSDF exists even under the current constitution — during his office, Abe passed the Legislation for Peace and Security and lifted the ban on the right of collective self-defence, without being investigated for going against the constitution.

In other words, even without changing the constitution, Japan is not hindered from rolling out new military laws; not to mention that there is still a long way to go between amending the constitution and Japan returning to its old ways of militarism.

Indeed, amending the constitution has a greater symbolic meaning. The right wing in Japan believes that the change would signify Japan coming out of the shadow of its defeat in the war, putting aside its “masochistic” view of history and becoming a “normal, ordinary” country.

US the deciding factor

Many people neglect the fact that the post-war system that the pro-amendment camp wants to break from was established by the US, which is in fact the other obstruction to revising the constitution, as doing so would impact the delicate US-Japan relations. In the words of Taiwan commentator Julian Kuo, the real key is whether the US wants to “release the tiger from its cage”.

From this perspective, whether Japan amends its constitution, whatever the future of China-Japan relations, or whether Abe was still alive, the US is still the deciding factor.

... while the Chinese people have been disrespectful with their comments about Abe’s assassination, the leaders have been calm and dispassionate about Abe or Lai’s visit to Japan.

While Abe was in office, China-Japan relations changed along with China-US relations. And after US President Joe Biden took office and advanced the policy of containing China with alliances, Japan’s stance against China became more apparent, and Japan’s status as a US ally also went up.

The Chinese leaders are probably also aware of this. One view is that China no longer sees Japan as an equal opponent; while the Chinese people have been disrespectful with their comments about Abe’s assassination, the leaders have been calm and dispassionate about Abe or Lai’s visit to Japan.

With Abe’s passing, there is no more “backseat driver” to keep the Kishida administration in check, and it is expected to put plans to amend the constitution in motion without being in a hurry to complete it. Meanwhile, Japan’s pro-US, pro-Taiwan stand will not change.

Amid the long-term tussle between China and the US, China needs to maintain such “equanimity”, and not let the noise of the combative netizens disrupt its master plan for its own revitalisation and for peace in East Asia.

Recently, Chinese netizens have said that if Japan goes back to militarism, China will have an opportunity to scrub away a century of shame — such sentiments are worth watching out for.

Related: 21st century strategist: Shinzo Abe left an indelible mark on geopolitics in Asia-Pacific | Shinzo Abe's second term: Was Abe pro-China? Should the Chinese miss him? | Shinzo Abe's first term: A princeling's attempt to rewrite World War II history | Balancing China: Can Japan continue to be a reliable power in SEA after Abe? | The real reason why Japan is following the US’s lead | US academic: Is Japan a true and loyal US ally?