China laments that it has not done anything wrong, amid the slew of bad reactions it has been getting internationally. Han Yong Hong points out while negative perceptions of China by major countries of the world are at an all-time high, this is not solely to do with strains in the US-China relationship. Individual countries have their beef with China for a host of reasons. When everything is all said and done, communication is still key, and China has just as much responsibility as everyone else to make the effort to bridge the gap. 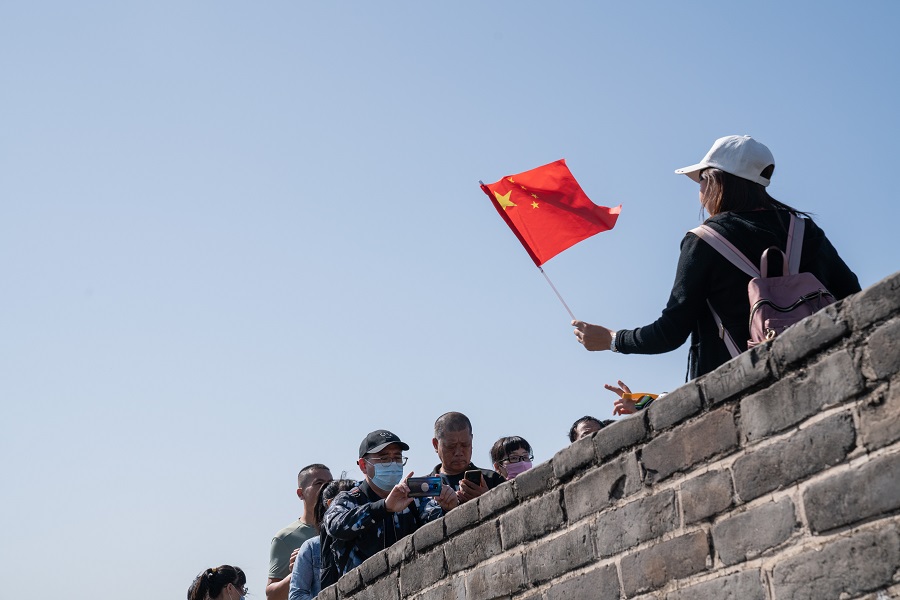 A visitor holds a Chinese flag while posing for a photograph at the Badaling section of the Great Wall in Beijing, China, on 1 October 2020. (Yan Cong/Bloomberg) Grace Chong - 17 September 2021
While retail investors and observers fear that Evergrande’s fall from grace will trigger a subprime mortgage crisis in China, the Chinese authorities seem quite comfortable letting Evergrande cover its own losses, despite the short-term instability foreseen. Han Yong Hong explains why.
Read more Can the CCP avoid the Stalin curse under Xi Jinping?

Grace Chong - 15 September 2021
Fatal flaws in the Soviet system, or the Stalin curse, led to the eventual demise of communist regimes in Eastern Europe. These systemic flaws had different manifestations at different levels of the system. The current CCP leadership is aware of these problems and has tried hard to avoid travelling down the same path of the Soviet Union, but tinkering with the same Leninist vanguard party is not going to ensure its survival. Instead, a new model of party building is needed to break the Stalin curse.
Read more Grace Chong - 14 September 2021
In part 2 of his reflections on the Chinese countryside, Egyptian-American architect Hisham Youssef asserts that local communities must be involved in the nation’s drive for rural rejuvenation. These can be projects that promote local culture and craft, rather than tourism per se. Perhaps through such efforts, the soul of these communities can be preserved and these rural gems can truly live on for generations to come.
Read more

Grace Chong - 14 September 2021
In recent years, Chinese criminal gangs have moved to Southeast Asia including Myanmar, Laos and Thailand as China tightened its crackdown on telecom fraud at home. These gangs even have the support of local authorities in some cases. Now that the Chinese authorities are cracking down on cross-border crime, will the situation improve? Or will it be a never-ending merry-go-round?
Read more Grace Chong - 14 September 2021
Gathering with contemporaries in Nan Shi Pi Ji, a Chinese garden in Suzhou, cultural historian Cheng Pei-kai is reminded of a rare perch found in the east side of Lake Tai called lugui (鲈鳜). This was the fish that Western Jin dynasty poet Zhang Han and other ancient literati craved when they were away from home. Served raw or in its modern rendition steamed, the delicacy is almost too good to eat. Did Cheng get a chance to taste it?
Read more
Translated by Grace Chong on 9 October 2020

According to a latest 14-country Pew Research Center survey, negative views of China have reached a historic high since over a decade ago. Japan — China’s close neighbour that had sent it warm messages such as “lands apart, skys shared” (山川异域，风月同天) this spring — ranked top of the list of those who had unfavourable views of China. 86% of Japanese respondents said that they had “somewhat unfavourable” or “very unfavourable” views of China, while Sweden and Australia followed close behind with 85% and 81% of respondents feeling the same way respectively.

In response to the survey, Global Times editor Hu Xijin asked on Wednesday, “Has China done anything wrong?” Full of grievance, he pointed out that China did not initiate any war and neither did it interfere in the domestic affairs of any other country. “But some Western political and public opinion elites have created various gimmicks to attack China and constantly poison the public’s understanding of China,” he said.

This is not the first time that Hu has said something to this effect. In July this year, he rhetorically asked in a Weibo post, “Has China done anything wrong? The Trump administration has launched a totally Cold War-like campaign to contain China.”

He answered his own question, saying: “All in all, the US cannot accept having its global hegemony threatened, even slightly. Therefore, it is super sensitive to any potential challenge. In the eyes of Washington, Beijing is more dangerous than any other rival… Therefore, the US wants to decouple from China and rope in its allies to contain China as it did against the Soviet Union.”

Undoubtedly, major power competition between China and the US is an important reason for the rapid deterioration of China's external environment. However, this only explains part of the reason, and applies just to the US. Apart from being influenced by the US, there are various reasons for the worsening relations between other major economies and China.

Amid China’s rise, the shifting sands of international influence, trade frictions, and disputes concerning intellectual property and national security are already intense enough. With the complexity of China’s domestic situation, differences in human rights and values that have always existed between China and the West would only become more prominent. Coupled with the Covid-19 pandemic that has exacerbated the distrust between China and foreign countries, and China’s problem-solving approach that often goes the opposite direction of alleviating conflict, the situation has finally become the way it is today.

China negatively viewed not just because of US-China fracas

For instance, the nosedive in relations between Australia and China is due to the US-Australia alliance, Australia’s pursuit of the source of the coronavirus, and China’s retaliation. But even before this, China and Australia had already seen friction caused by incidents such as the alleged infiltration of Australian government and society by agents working for China. As for the deterioration of relations with Sweden, that is directly related to the arrest and jail of writer Gui Minhai, who ran a bookstore in Hong Kong’s Causeway Bay — both China and Sweden claim him as their citizen.

In Europe, the issues of Xinjiang and Hong Kong are increasingly prominent, and even European companies operating in China are under pressure at home because of education centres in Xinjiang (known as “concentration camps” in the West). Having gone through the negative past experience of autocratic oppression and communist rule, European countries are inevitably deeply suspicious of China’s governance, while China underestimates the psychological impact of human rights issues on Western society. And so, this week, Germany led 39 countries at the UN in criticising human rights in Xinjiang, and expressing “deep concern” over the changes in Hong Kong. The Inter-Parliamentary Alliance on China (IPAC) — made up of parliamentarians from eight countries — is planning to revoke Beijing’s eligibility to host the 2022 Winter Olympics.

From trade to human rights, Xinjiang to Hong Kong, China is facing growing hostility. But has China done anything wrong?

There is no simple answer to this question. National interests and wolf-warrior approach aside, it is reasonable for China to be concerned about Xinjiang and Hong Kong. But China’s strong tactics in handling domestic challenges clearly go beyond international expectations and have an impact on mainstream international values, and developed countries simply cannot understand. On its part, Beijing is also not too sensitive to the differences between its beliefs and that of other countries.

China’s current situation and historical experiences are very different from those of developed countries, and its approach to issues cannot be the same as the West. And in facing tough domestic challenges, China will first consider domestic political needs, social realities, and mainstream sentiment, over international perceptions. Naturally, it is imaginable and, in fact, inevitable for the international community to be anxious or uneasy about how China will apply its domestic approach to other countries once it gets strong. Besides, China’s tough stance in the South China Sea sovereignty disputes over the past decade is making some Southeast Asian countries uncomfortable.

Ideally, the world needs to embrace China’s rise, while China needs to understand what other countries are worried about.

How can this situation be changed? Say what we like, it is all about communication and building trust through action. But this is easier said than done. Ideally, the world needs to embrace China’s rise, while China needs to understand what other countries are worried about. As a rising country with a wide hinterland, domestic growth and stability will be China’s all-encompassing consideration. The gap between China and the rest of the world is not easy to close. What is needed right now is for everyone to show self-restraint and not let relations get worse. That is a more realistic expectation. Politics
Can the CCP avoid the Stalin curse under Xi Jinping?