China gearing up for intense competition in the Pacific

China knows it needs to soften its tone as the US, Australia, New Zealand and others bristle at its interest in the Pacific island countries. The traditional powers are stepping up their game as well. But whether it likes it or not, the region will likely see greater power tussles as the strategic imperatives are simply too great for China to back off completely. 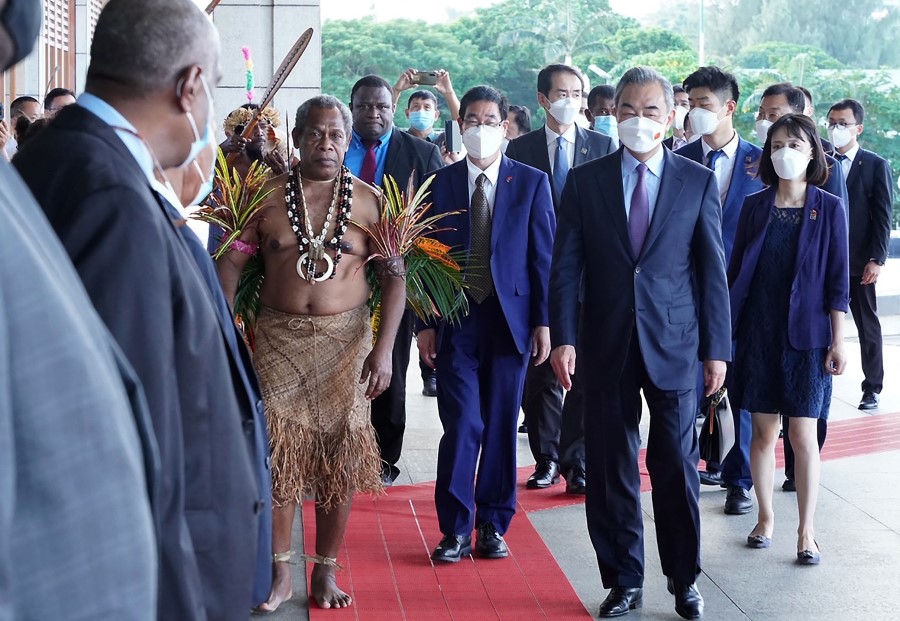 Candice Chan - 30 January 2023
A mall in Shenzhen came under fire for putting up white lanterns with black text as part of its Chinese New Year decorations, while an “ugly” rabbit-shaped light decoration was removed from another mall in Chongqing. Academic Zhang Tiankan muses on tradition and innovation, and the evolution of traditional decorations.
Read more
Translated by Candice Chan on 13 June 2022

Chinese Foreign Minister Wang Yi’s recent visit to the Pacific made the headlines, not least for China’s failed attempt to sign two broad agreements with ten Pacific partner countries. While Beijing’s gains and losses are up for debate, there is no doubt that geostrategic competition in the region is intensifying.

But the question remains: what will relations between China, the Pacific island countries and traditional powers look like in the near future? The answer directly affects peace and stability in the Pacific and the Indo-Pacific at large.

Though small in size and population (except Papua New Guinea), the Pacific island countries matter to China with respect to voting support at multilateral fora and South-South cooperation.

China’s inroads into the Pacific islands

The aforementioned broad agreements will remain on China’s agenda although Chinese officials will be more cautious in pushing for policing and security cooperation.

To assuage the region’s concerns, there is little doubt that China will seek to foster closer relations with the Pacific island countries. In doing so, it will reiterate that it has no military ambitions in the region. It will strengthen cooperation with Pacific island countries in areas such as climate change, poverty reduction, disaster relief, agriculture and sustainable agriculture development such as “fungus grass” (菌草) technology, and emergency material supplies.

Such pragmatism is aimed at highlighting the tangible benefits that Pacific island countries stand to gain from China’s development-oriented approach, and ultimately convince these islands to stick with China.

On their part, traditional powers are ramping up their support for the Pacific islands in areas such as climate change, health and infrastructure.

How effective these efforts will be remains to be seen. On their part, traditional powers are ramping up their support for the Pacific islands in areas such as climate change, health and infrastructure. For example, in its Indo-Pacific strategy released in February 2022, the US government pledged to support Pacific islands in strengthening their climate resilience. This provides a new option for the region (similar to the time between 2006 and 2014 when Fiji looked to China when the traditional powers sanctioned it for the 2006 coup) and will affect China’s influence.

For example, similar to the previous government, the newly elected Labor government in Australia is concerned about China in the Pacific. This has prompted Canberra to bolster their presence in the region, including sending Foreign Minister Penny Wong to visit Fiji and Samoa where her commitments to align with Pacific islands’ priorities in areas like climate change and ocean surveillance were well received by Pacific leaders.

New Zealand’s evolving policy vis-à-vis China in the Pacific is worth a mention. During Prime Minister Jacinda Ardern’s visit to the US in May 2022, both countries expressed shared concerns about China’s intentions and activities in the Pacific, especially in relation to the China-Solomon Islands security pact.

The joint statement was straightforward: “In particular, the United States and New Zealand share a concern that the establishment of a persistent military presence in the Pacific by a state that does not share our values or security interests would fundamentally alter the strategic balance of the region and pose national-security concerns to both our countries.”

This signals Wellington’s hardening position on China despite China’s pride in establishing several ‘firsts’ with New Zealand (such as New Zealand being the first Western country to negotiate and sign a free trade agreement with China) in its bilateral relations and its frequent praise of this partnership as a model of China-Western countries relations.

Australia, New Zealand and Tonga will also join the 28th US-led Rim of the Pacific military exercise between June and August 2022. This drill is to demonstrate the capability of the US and its partner countries to maintain regional peace and security in a veiled reference to China’s assertive activities in the region.

China wants to be 'a direct stakeholder'

In terms of knowledge-building, in March 2022, the East West Center in Hawaii launched “The Pacific Islands Matter for America/America Matters for the Pacific Islands” publication and website. This research programme is just one of the many efforts made to raise the American public and lawmakers’ awareness of the Pacific islands in support of related policy making.

To reduce the strategic pressure it faces from traditional powers, China has expressed its willingness to cooperate with the latter. Chinese officials including Foreign Minister Wang Yi have clarified that China will not seek to establish a military base in the Solomon Islands in the wake of their bilateral security pact signed in March 2022. Wang said that China’s security cooperation with the Pacific islands will complement rather than replace the existing regional security arrangements.

... Foreign Minister Wang Yi also said that China is open to conducting trilateral cooperation with traditional powers in the Pacific. However, given the profound mutual mistrust, this will be easier said than done.

The Pacific islands have also received the growing attention of the China International Development Cooperation Agency (CIDCA) since its creation in 2018. For example, CIDCA deputy director Zhao Junfeng met with Solomon Islands’ ambassador to China, John Moffat Fugui, in May 2022, pledging support for Solomon Islands in the areas of health, telecommunications and educational training. Back in December 2021, CIDCA organised a meeting with China’s Ministry of Commerce, Export-Import Bank of China and Chinese contractors to strengthen the supervision of Chinese concessional loans and Covid-related aid to Vanuatu.

As the supervisor of CIDCA, Foreign Minister Wang Yi also said that China is open to conducting trilateral cooperation with traditional powers in the Pacific. However, given the profound mutual mistrust, this will be easier said than done. Both sides are unlikely to embark on joint aid projects in the Pacific unless respective bilateral relations improve significantly. Take China-Australia relations as an example. China continues to insist that Australia should take responsibility for the strained bilateral relations and therefore should make more efforts to repair the relations.

China will not easily back off.

On the other hand, despite China’s softening its tone, the trend of geostrategic contests in the Pacific will continue, and China will not easily back off. For example, China lambasted traditional powers’ criticism of the China-Solomon Islands security pact, arguing that “the South Pacific is not anyone’s backyard…China is the direct stakeholder in South Pacific regional security…and China will continue to promote cooperation with Pacific islands in various areas.”

In this sense, the Pacific region will receive more attention from China and traditional powers and it will face more uncertainties in the future.