Bitcoin mining has been a huge money spinner for many people in China, not least in the less developed areas where it can be a lifeline out of poverty. While some Bitcoin miners have been put in a very difficult position with the Chinese government's recent clampdown on Bitcoin mining farms, they are not giving up yet. 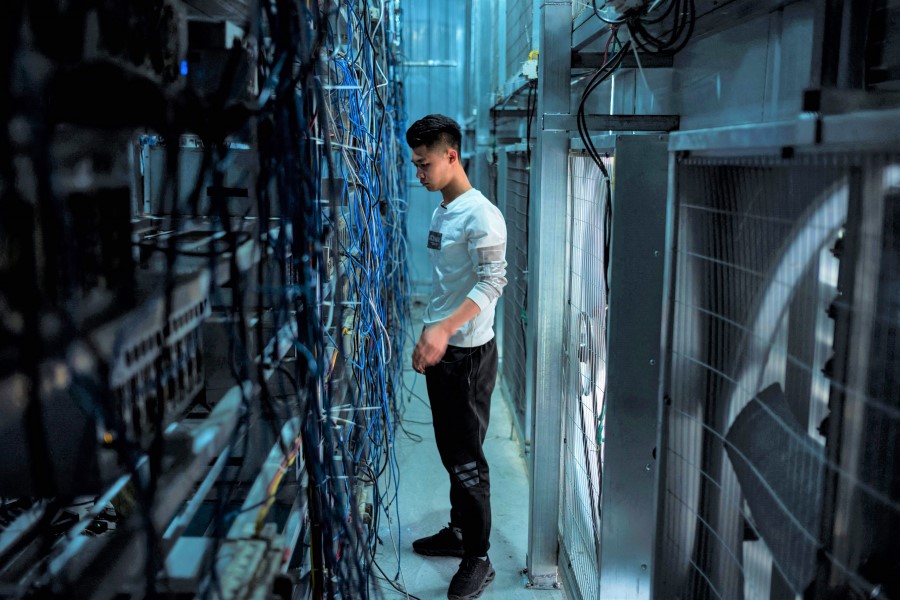 Candice Chan - 19 January 2023
The latest announcement of China’s first population drop in six decades has gained much attention, with concerns over the long-term implications for the economy and the community. How will this affect China’s GDP and its aim to overtake the US as the world’s biggest economy? Can China reverse the population trend?
Read more
Translated by Candice Chan on 4 August 2021

For the past year and a half, the loud whirring of tens of thousands of high-power computers filled a cavernous warehouse round-the-clock, making a stark contrast with the hushed forests of the Ngawa Tibetan and Qiang autonomous prefecture in Southwest China’s Sichuan province.

This computational arsenal belonged to a crypto mining farm, a facility crammed wall-to-wall with specialised computers dedicated to solving the complex math problems that keep the network running, and earning new Bitcoin along the way.

“That’s the sound of cash coming in,” said Ye Lang (pseudonym), the 40-year-old manager of the two-floor facility in the prefecture’s Heishui county.

At the peak of the facility’s Bitcoin mining operations, Ye was in charge of 80 employees and a total of 80,000 mining machines, with the entire project estimated to be earning more than 90 million RMB (US$14 million) during the peak six months when Sichuan’s rivers are glutted and electricity is especially cheap.

But this all came to an end at 9 pm on 19 June, as a clean-up notice jointly issued a day before by the Sichuan government demanded the closure of Ye’s facility, along with 25 other cryptocurrency mining projects in the province.

The shutdown notice followed a 21 May meeting of the State Council’s Financial Stability and Development Committee, a top-level economic and financial policymaking body chaired by Vice Premier Liu He, which specifically stated that the country will “crackdown on Bitcoin mining and trading”, citing the financial risks involved.

Ye had to terminate all operations: one by one, the facility’s 2,000 giant fans stopped rumbling, and the computers stopped whirring.

The fact that the electricity for crypto mining in Sichuan came from hydropower meant that many thought the province would be a safe haven for Bitcoin miners.

The heyday of Bitcoin mining

Ye decided to jump on the Bitcoin mining bandwagon in 2018 when he closed down the majority of his internet cafe business, mortgaged his apartment in Anqing, Anhui province, borrowed money from relatives and left his wife and daughters to move to Sichuan. The province was until recently China’s second-largest Bitcoin mining region after Xinjiang, thanks to its rich, cheap hydropower.

He got a lucky break in November 2019 when he was introduced to Liu Weimin (pseudonym), a well-connected Sichuan businessman, who had just negotiated a deal with a state-owned hydropower plant to build a crypto farm in Heishui county, around 300 kilometres from provincial capital Chengdu. Ye was appointed manager of the facility.

“I watched this centre being built brick by brick,” Ye said.

The fact that the electricity for crypto mining in Sichuan came from hydropower meant that many thought the province would be a safe haven for Bitcoin miners. As pressure on local governments to cut carbon emissions mounts, projects were successfully shuttered in some other provincial-level regions — such as Xinjiang and Inner Mongolia — where the mining was chiefly fueled by coal.

Also, the Sichuan government appeared to be positive toward the business. In July 2019 it decided to set up demonstration zones that welcomed energy-intensive industries to help consume hydropower during the summer and autumn months that would otherwise be wasted.

... the global average hash rate of Bitcoin, which is the total combined power being used to mine the cryptocurrency and process transactions, dropped 48% from its historic peak on 13 May by 21 June, the day after the Sichuan government-mandated closures.

As of April, China was still home to 46% of the world’s Bitcoin mining activity, with the US coming in second place with 16.8%, according to data gathered by the Cambridge Centre for Alternative Finance.

But everything has changed since the May government meeting, which came after global speculation boosted the Bitcoin price to an all-time high of nearly US$65,000 per token in mid-April.

According to blockchain information website QKL123, the global average hash rate of Bitcoin, which is the total combined power being used to mine the cryptocurrency and process transactions, dropped 48% from its historic peak on 13 May by 21 June, the day after the Sichuan government-mandated closures.

“Companies are banned from mining Bitcoin, but individuals aren’t,” Ye said, adding that he plans to turn around his operation by purchasing old equipment and downsizing.

Despite the government’s hardline approach, Ye is determined to carry on: “This industry is extremely volatile. High emotions and stress are involved, but that’s also its appeal.”

“Companies are banned from mining Bitcoin, but individuals aren’t,” Ye said, adding that he plans to turn around his operation by purchasing old equipment and downsizing.

Putting Plan B into action

Liu, the owner of the shuttered farm that Ye managed, is also devising a Plan B, unfazed by the dent the government’s put in his wallet.

The 40-year-old became a billionaire due to his early investments in Bitcoin. In Sichuan alone, Liu owned more than ten Bitcoin mining farms, which industry insiders estimated accounted for one-eighth of the total electricity consumed by all Bitcoin mines in the province.

During peak seasons, Liu said his farms could mine 70 to 80 Bitcoins every day. About 900 Bitcoins are issued each day globally, according to an industry information platform. The price of Bitcoin is highly volatile, and was sitting at just over US$38,500 per token on 26 July, up more than 250% from a year earlier but down over 40% from its April peak.

Liu got a first taste of the potential of crypto mining in 2016, when his friend from college showed him a Bitcoin mining machine. Already more than two million RMB in debt from a failed farming business, he bought ten mining machines with 10,000 RMB and installed them at a facility run by a startup incubator in Mianyang, Sichuan.

With the electricity fee fully subsidised by the incubator, Liu was able to earn nearly 200 RMB in profit every day running the computers. He added another 50 computers shortly, only to get kicked out by the incubator on New Year’s Day in 2017 because it could no longer stand the bills the operation had racked up.

Liu then decided he’d go big or go home. In early 2017, he started with just over 200 mining machines before accumulating around 10,000 machines in September that year.

Shortly after repaying all his debts, Liu decided to adjust his business model and not mine his own Bitcoin — instead, he set up large-scale mining farms for others and helped them manage their machines.

“Mining farms are somewhat like conventional crop farms. No matter how the Bitcoin market changes, the mining process remains. Opening such facilities is a relatively stable investment, and I can generally break even in a year,” Liu told Caixin.

Thanks to the Sichuan government’s mining-friendly policies back then, Liu’s business continued to flourish for the past three years. He quickly made a name for himself, and was a frequent guest at government events and meetings, where he was recognised as one of many model energy consumers who had helped lift locals out of poverty.

In mid-June, his [Liu's] company bought an oilfield in Canada that could potentially provide fuel for his Bitcoin mining business.

But everything went just as fast as it came. The first explicit warning came in late February, when authorities in Inner Mongolia proposed banning new crypto mining projects and shut down the entire industry by the end of April as part of a plan to meet the central government’s greenhouse gas emission reduction targets. Soon enough, Qinghai, Xinjiang and Yunnan followed suit.

The clampdown eventually reached Sichuan, with authorities ordering the shutdown of all crypto mines — including all of the ones under Liu’s management — before 20 June.

Thankfully, Liu had the foresight to diversify his investments early on in 2019, putting money in various health care, real estate, gaming and entertainment businesses. Following the government’s 21 May crackdown announcement, he arranged teams of employees to scout for new venues in North America and Kazakhstan. In mid-June, his company bought an oilfield in Canada that could potentially provide fuel for his Bitcoin mining business.

In fact, some fossil fuel-rich states in the US are now welcoming crypto operations that can use up stranded natural gas produced by oil companies. In May, Shenzhen-based firm Bit Mining Ltd. signed a US$26 million deal to build a crypto mining centre in Texas, which is quickly becoming the new cryptocurrency capital thanks to its relatively cheap energy and favourable laws backed by its pro-crypto governor, Greg Abbot.

Right now to Liu, an ideal overseas location for his crypto mining business would have to check two boxes: cheap energy and Covid-safe.

“This is going to be a brand new adventure,” he said.

This article was first published by Caixin Global as "In Depth: The Fall of China’s Last Bitcoin Mining Haven". Caixin Global is one of the most respected sources for macroeconomic, financial and business news and information about China.