Some outfits at a showcase of Li-Ning’s Fall/Winter collection said to resemble uniforms worn by the Japanese military during their invasion of China have sparked a wave of controversy, and this is made worse by the fact that a member of Li-Ning’s senior management is Japanese-Chinese. Are the Chinese netizens too sensitive or is Li-Ning too insensitive? 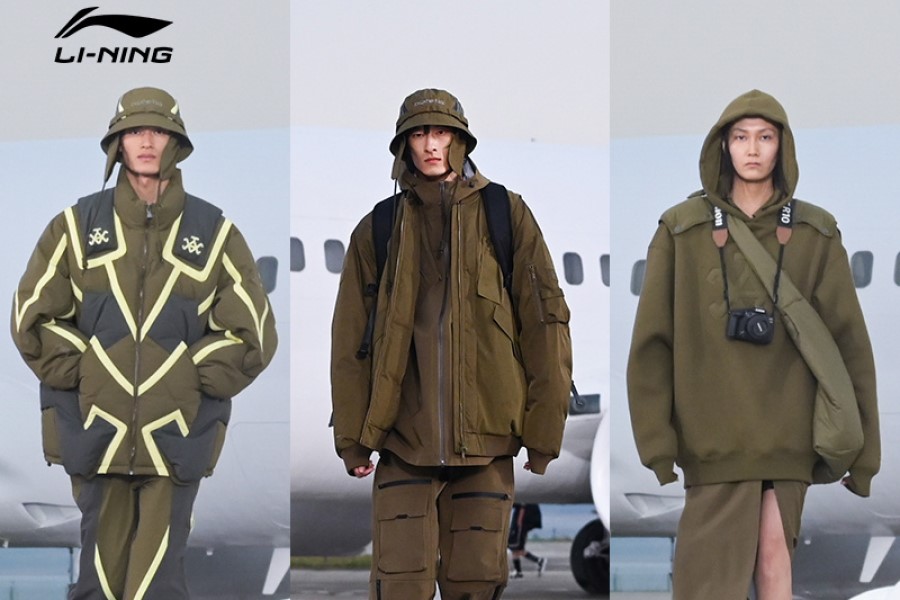 Candice Chan - 28 November 2022
Often referred to as the world’s economic “canary in the coal mine”, South Korea has seen its economy tumble over the past year, impacted by external factors such as US interest rate hikes and signs of recession in key trade partners. The accumulation of domestic factors — currency crisis, tumbling stock market and rising inflation — is also hitting the South Korean economy hard. However, this industrial powerhouse has the domestic means to climb out of the doldrums.
Read more
Translated by Candice Chan on 27 October 2022

After making a serious error during the 1988 Seoul Olympics, legendary Chinese gymnast Li Ning received a noose from a spectator.

Now, Li’s eponymous fashion brand is under fire for its Fall/Winter collection showcasing designs resembling the uniforms of Japanese invaders. Netizens are calling for Li Ning to sell his clothes in Japan instead.

On 21 September, Li-Ning’s official Weibo unveiled 27 looks in its Chasing Dreams collection designed in green, blue, white and black colour palettes. Hats covering the cheeks came in matching colours. Nothing was amiss except that the army green ensemble looked like the attire worn by the Japanese troops that invaded China. And coincidentally, that look was the centrepiece of a photo collage of the collection.

Netizens did not flag anything at the time, and some even thought using the airport as the venue for the fashion show befitted the “sci-fi” feel of the clothes. But after 15 October, the tide turned, with more voices zooming in on the army green outfits, calling them “little devils”, a derogatory term for the Japanese.

One netizen joked, “I took Li-Ning as a homegrown Chinese brand, but Li-Ning took me as a dazuo (大佐, lit. Japanese colonel).” The term dazuo as a Japanese military rank is commonly seen in Chinese films about the Japanese resistance, and gradually became a derogatory internet slang for Japanophiles.

Management in trouble due to Japanese identity

To make matters worse, Li-Ning’s executive director and joint CEO Kosaka Takeshi was vilified for being of Japanese descent and accused of bringing the dazuo trend to the brand.

According to the official Li-Ning website, 51-year-old Kosaka is a Japanese-Chinese whose Chinese name used to be Qian Wei. He was born in 1971 in Shaanxi, and went to Japan in 1990 to study, where he graduated from Kwansei Gakuin University. Before joining Li-Ning, he was CEO of South Korea Uniqlo. He served as the vice-general manager and the chief operating officer of Uniqlo in China in 2001 and 2005 respectively, and has over 18 years of experience in the development and management of the China market.

In fact, Kosaka helped turn things around for Li-Ning. Before Kosaka was appointed, Li-Ning went through three managers. While Chen Yihong — who founded the company with Li Ning — and 20-year veteran Zhang Zhiyong had left their mark on the company, the former was replaced when the new exclusive rights to China for Kappa failed to make a profit, and the latter’s aggressive expansion and blind strategic adjustments sent the company into a financial crisis.

From 2012 to 2014, the beleaguered Li-Ning posted total losses of over 3.1 billion RMB (US$429.3 million). Its market value quickly declined, and it lost its pole position in the industry to Anta Sports.

To save the company, in 2014 Li Ning brought in Kim Jin-Goon, a partner at alternative asset management firm TPG. Kim previously turned around apparel company Daphne International, but the “Channel Revival Plan” he implemented for Li-Ning had little effect, and he stepped down after just eight months.

In 2015, then 52-year-old Li Ning had no choice but to step in himself to reform the company, increasing investments in design and research and development for original products, thus starting a renaissance of homegrown Chinese products. Li-Ning made its recovery that year and its annual profit grew 13%, 11% and 18% from 2016 to 2018 respectively, showing accelerating growth overall.

Even amid the pandemic in 2022, Li-Ning had an excellent showing of double-digit growth in its first-half revenue and net profit.

In 2019, as he felt that the company’s retail operations were still lacking, Li Ning brought in Kosaka. With his management experience in consumer operations, Kosaka did not disappoint. Thanks to Kosaka’s experience with Uniqlo, Li-Ning’s profits grew for three consecutive years. In 2021, Li-Ning’s revenue broke 20 billion RMB for the first time, its best performance since listing.

Even amid the pandemic in 2022, Li-Ning had an excellent showing of double-digit growth in its first-half revenue and net profit.

Some analysts believe that Li-Ning has been defying the development model of family businesses in wanting to stand shoulder to shoulder with the big global brands; to become a modern company with a modern management system, and so it sought a suitable manager. But now, Kosaka may be forced to leave amid the huge controversy.

No hiding the incident

Prior to Li-Ning’s public statement on their official Weibo on 19 October, two senior members of the company indirectly expressed their views on social media.

Li-Ning’s vice-president in charge of e-commerce Feng Ye posted four historical photos of Ming dynasty helmets (笠型盔) on his WeChat, noting in Chinese, “Our consumers do not have a firm foundation in Chinese culture and pass on relatively little knowledge of it. At the same time, we should reflect on how to avoid more misinterpretations in correctly guiding consumers.”

Li Ning’s nephew and the company’s executive director Li Qilin posted five photos on Weibo, including images of the hats of the Soviet Red Army, a helmet of China’s Southern Song dynasty, and the hats of the People’s Liberation Army as shown in the movie The Battle at Lake Changjin (长津湖). The post has since been removed.

All the headgear above are designed to protect the cheeks.

At the time of writing, Li-Ning has not pulled these products, and photos of the Fall/Winter collection can still be found on Weibo. Despite the furore from netizens, the posts in question did not make Weibo’s top searches. Furthermore, Chinese artiste and Li-Ning’s global ambassador Xiao Zhan has not spoken out.

... the military hat that shields the cheek is not unique to the Japanese army.

Amid the wave of criticism, some voices have called for calm.

Some analysts believe that Li-Ning has succeeded based on its halo of being "the glory of homegrown products" and "a good brand of the people", and will not gain anything by destroying its name and image. With the China domestic market making up its main market, it is unlikely that Li-Ning would intentionally stir up nationalism among the Chinese people.

Also, while Kosaka is Japanese-Chinese, he has brought a lot of value to Li-Ning. As a well-experienced manager, he understands that a hit on the company would doom his own future, and people should not speculate on the cause of the incident based on the nationality of the company’s top management.

In terms of looks, the military hat that shields the cheek is not unique to the Japanese army. Besides, the uproar happened nearly a month after the fashion show. The entire fiasco might just be due to the unintentional pairing of the hat and an army green jacket, leading to some dissonance.

While some comments called for netizens to “be civil”, others reminded Li-Ning to be more careful in its designs and public relations. Otherwise, the company’s founder may not be able to make a comeback and revive his former glory as he approaches his sixties.

This article was first published in Lianhe Zaobao as 下午察：中国李宁变日本大佐？