From the speed and single-mindedness with which Beijing has passed the national security law for Hong Kong, it is evident that it is highly suspicious of foreign intervention and threats to national sovereignty. With the enactment of this law, it may have reaffirmed its authority and returned Hong Kong firmly under its wings, but has it achieved the return of the hearts and minds of the Hong Kong people? And while Beijing believes that it owns Hong Kong, some Hong Kongers and the Western world think otherwise. 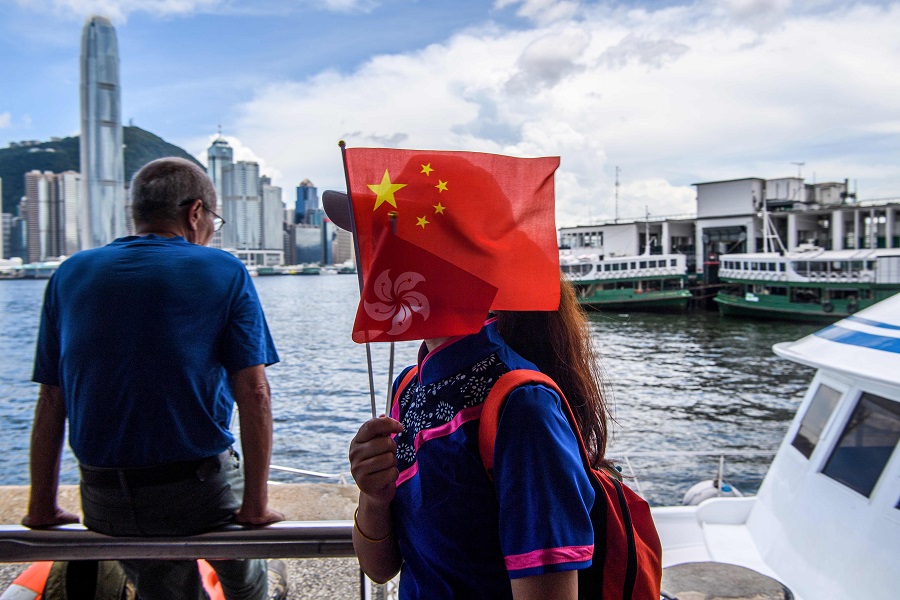 A member of a local community group holds Chinese and Hong Kong flags as she disembarks from a boat in Victoria Harbour on the 23rd anniversary of the city's handover from Britain in Hong Kong on 1 July 2020. (Anthony Wallace/AFP)

Grace Chong - 12 May 2022
Teo Han Wue laments that we are not doing enough to remember the remarkable contributions that Singapore’s pioneers of the arts have made. Singapore’s early artists and theatre practitioners were the avant-garde who went beyond the tried and tested in China or elsewhere. If we don’t remember our past achievements, how can we be inspired to produce greater things in the future?
Read more
Translated by Grace Chong on 3 July 2020

At 11pm on 30 June 2020, just an hour before the 23rd anniversary of Hong Kong’s return to China on 1 July, the “Law of the People’s Republic of China on Safeguarding National Security in the Hong Kong Special Administrative Region” was passed. The world finally got a first look at all six chapters and 66 articles of the law, and many were also reminded that up until 23 June, Hong Kong Chief Executive Carrie Lam had not seen the full text of this important law as well.

“They’ve created something which is like a layered cake. It’s like a wedding cake. It has many different levels to it. It has an amazing structure,” said Andrew Nathan, renowned China observer and Columbia University political science professor, during a video conference on the Hong Kong national security law.

According to Nathan, the bottom layer of this four-layered wedding cake includes Articles 12, 13, 15 of the law. These articles state that Hong Kong shall “establish the Committee for Safeguarding National Security” that the chief executive chairs. The committee shall also “be under the supervision of and accountable to the Central People’s Government”, which would designate a “National Security Adviser” who “shall sit in on meetings of the Committee”.

Article 44 of the law states that the “number of judges from deputy judges or recorders” who “handle cases concerning offence endangering national security” shall also be designated by the chief executive.

It demonstrates Beijing’s distrust and suspicion of “foreign countries that wish them ill”, the people of Hong Kong who have fallen victim to these forces, and even the officials of the special administrative region.

Above this level, the law stipulates that cases involving a foreign country or external elements, where the HKSAR government is not able to effectively enforce this law, and where there is a major and imminent threat to national security, shall be placed under the jurisdiction of the Office for Safeguarding National Security of the Central People’s Government in the Hong Kong Special Administrative Region and prosecuted in the mainland in accordance with the mainland’s Criminal Procedure Law.

Finally, Article 65 of the law states that the “power of interpretation of this Law shall be vested in the Standing Committee of the National People’s Congress”, firmly building the fourth layer of control in safeguarding national security.

Nathan described the law as “elaborate”, and “absolutely airtight”. It demonstrates Beijing’s distrust and suspicion of “foreign countries that wish them ill”, the people of Hong Kong who have fallen victim to these forces, and even the officials of the special administrative region.

Also, before the law was passed, there was no communication between the governments of Beijing and Hong Kong and Hong Kong society, or even the international society — the entire process was mysterious, barbaric, and wilful. - Oppositions to the law

A few points sum up the opposition against the law: Beijing had bypassed the Legislative Council of Hong Kong and forced through the law on Hong Kong, destroying the “one country, two systems” principle and Hong Kong’s original judicial independence. Also, before the law was passed, there was no communication between the governments of Beijing and Hong Kong and Hong Kong society, or even the international society — the entire process was mysterious, barbaric, and wilful. Others have also criticised Beijing for not attempting to understand the root cause of Hong Kong’s frustrations — that is, Beijing did not fulfil its promise of universal suffrage in Hong Kong but instead insisted on forcefully bringing Hong Kongers to heel, resulting in Hong Kong’s worsening situation in recent years.

These disputes involve specific means and measures that do indeed have room for negotiation and improvement. However, an unavoidable and crucial question is whether Beijing had the right and was within reason to demand that Hong Kong pass a national security law.

After 23 long years have passed — isn’t it a fact that Hong Kong has yet to enact a national security law on its own until today?

After 23 long years have passed — isn’t it a fact that Hong Kong has yet to enact a national security law on its own until today?

Beijing has reason to believe that if a negotiation process was allowed in the enactment of the national security law, it would end up in the same way as the proposal of the extradition bill known as the Fugitive Offenders and Mutual Legal Assistance in Criminal Matters Legislation (Amendment) Bill 2019 and see a fresh bout of violent protests. Thus, it can only be processed in secret, and passed and implemented by force to resolve Hong Kong’s national security problem. Hence, Nathan’s analysis of Beijing’s having deep distrust in and suspicions about international forces and Hong Kongers is indeed spot on. Apart from ideological differences between both sides, the crux of such distrust lies in the different interpretations that Beijing, Hong Kong, and the Western world as represented by the US have over this one unsaid question: To whom does Hong Kong belong?

...while Hong Kong is not an independent political entity and does not have the conditions for independence, it is not entirely part of China, but is shared by the international society instead. - Hong Kong elites and Western commentators

Undoubtedly, China insists that Hong Kong has always been a part of it since the beginning — Hong Kong was just ceded to Britain because of the First Opium War. Yet, according to some Western media narratives, 1997 did not mark Hong Kong’s “return” to China — it was only a transfer of sovereignty to China.

Over the years, some Hong Kong elites and Western commentators have occasionally expressed the following idea indirectly: while Hong Kong is not an independent political entity and does not have the conditions for independence, it is not entirely part of China, but is shared by the international society instead. Such ideas emphasise that Hong Kong is a global financial centre that holds great benefits for various countries, or that Hong Kong’s current state is part of the US-led international order that should be jointly safeguarded by the international community and not be destroyed by Beijing. This is also the reason why some Hong Kongers have even blatantly demanded foreign countries like the US and Germany to stop the mainland from oppressing Hong Kong.

In actual fact, social protests in Hong Kong over the past few years, including the anti-extradition bill protests and the US’s support for the Hong Kong protests, are also struggles for sovereignty. Beijing forcing through a national security law for Hong Kong also signals a declaration of its sovereignty and its unwillingness to merely be Hong Kong’s “shareholder”. The implementation of the law also symbolises the inevitable deterioration of China-US relations.

An important reminder to those in power is that control over sovereignty and the return of people’s hearts are two starkly different concepts.

That being said, external parties still expect an extremely cautious law enforcement process so that Hong Kong’s mesmerising open and diverse characteristics will not vanish from this day forward. An important reminder to those in power is that control over sovereignty and the return of people’s hearts are two starkly different concepts. If Hong Kong’s “second return” to China ought to include the return of people’s hearts, then Beijing and Hong Kong clearly have their work cut out for them.

Reuters reported that the UN human rights office has expressed concern at the "vague and overly broad" provisions of the security law. UN human rights spokesman Rupert Colville was quoted as saying, "We are alarmed that arrests are already being made under the law with immediate effect, when there is not full information and understanding of the scope of the offences." In other news, Bloomberg reported that the Hong Kong government has banned the slogan "Liberate Hong Kong! Revolution of our time!”, often used by pro-democracy protestors. A 24-year-old man was charged today, inter alia, for inciting secession with this slogan. The report added that 370 people were arrested at protests against the law on 1 July.